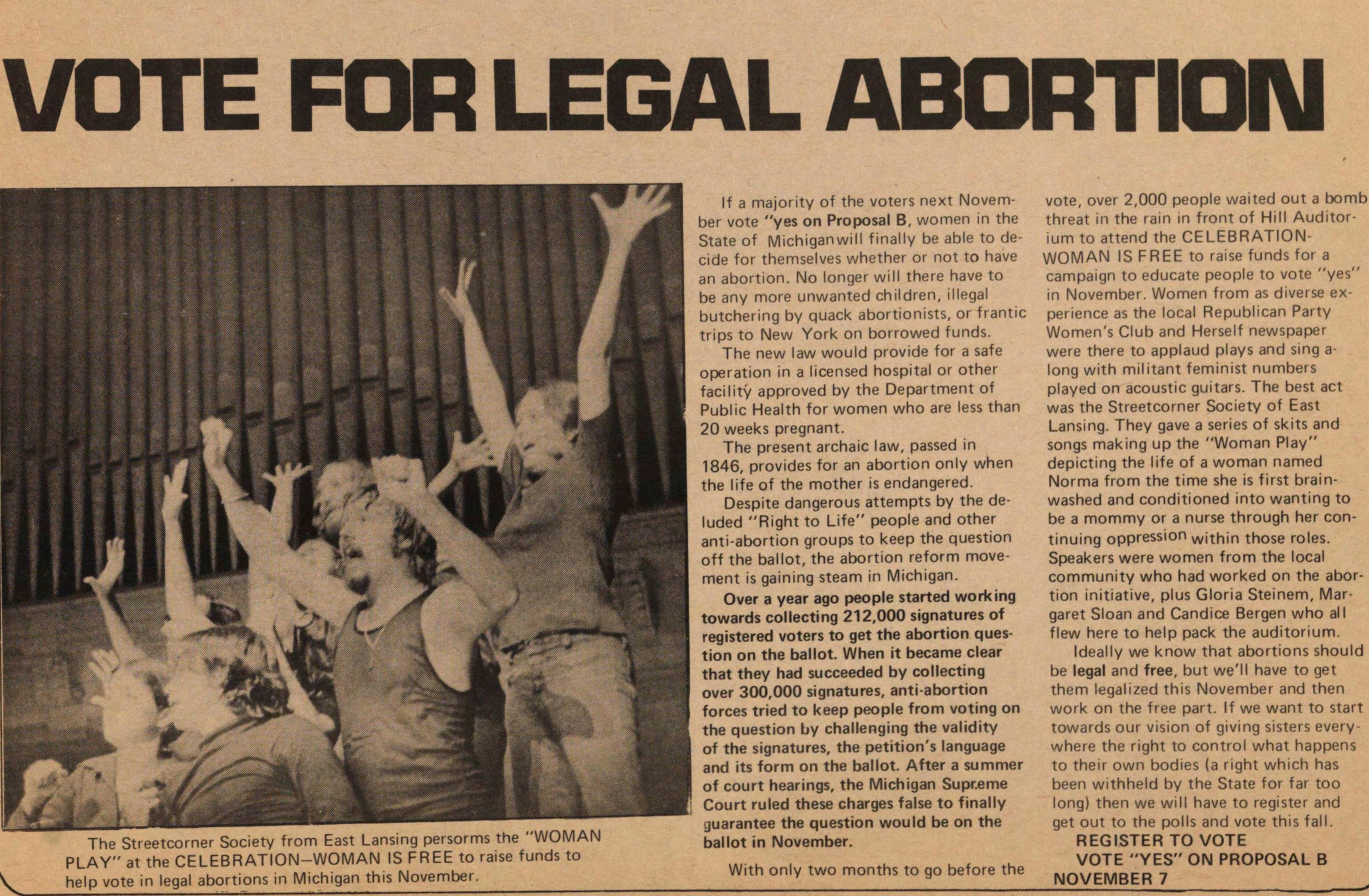 If a majority of the voters next November vote "yes on Proposal B, women n the State of Michiganwill finally be able to decide for themselves whether or not to have an abortion. No longer will there have to be any more unwanted children, Ilegal butchering by quack abortionists, or frantic trips to New York on borrowed funds. The new law would provide for a safe operation in a licensed hospital or other facility approved by the Department of Public Health for women who are less than 20 weeks pregnant. The present archaic law, passed in 1846, provides for an abortion only when the life of the mother is endangered. Despite dangerous attempts by the deluded "Right to Life" people and other anti-abortion groups to keep the question off the ballot, the abortion reform movement is gaining steam in Michigan. Over a year ago people started working towards collecting 212,000 signaturas of registered voters to get the abortion question on the ballot. When it became clear that they had succeeded by collecting over 300,000 signatures, anti-abortion forces tried to keep people from voting on i the question by challenging the validity of the signatures, the petition's language and its form on the ballot. Af ter a summer I of court hearings, the Michigan Supr.eme Court ruled these charges false to finally guarantee the question would be on the ballot in November. With only two months to go before the vote, over 2,000 people waited out a bomb threat in the rain in front of HMI Auditorium to attend the CELEBRATIONWOMAN IS FREE to raise funds for a campaign to edúcate people to vote "yes" in November. Women from as diverse experience as the local Republican Party Women's Club and Herself newspaper were there to applaud plays and sing along with militant feminist numbers played on acoustic guitars. The best act was the Streetcorner Society of East Lansing. They gave a series of skits and songs making up the "Woman Play" depicting the life of a woman named Norma from the time she is first brainwashed and conditioned into wanting to be a mommy or a nurse through her continuing oppression wthin those roles. Speakers were women from the local community who had worked on the abortion initiative, plus Gloria Steinem, Margaret Sloan and Candice Bergen who all flew here to help pack the auditorium. Ideally we know that abortions should be legal and free, but we'M have to get them legalized this November and then work on the free part. If we want to start towards our visión of giving sisters everywhere the right to control what happens to their own bodies (a right which has been withheld by the State for far too long) then we will have to register and get out to the polls and vote this fait. REGISTER TO VOTE VOTE "YES" ON PROPOSAL B NOVEMBER 7