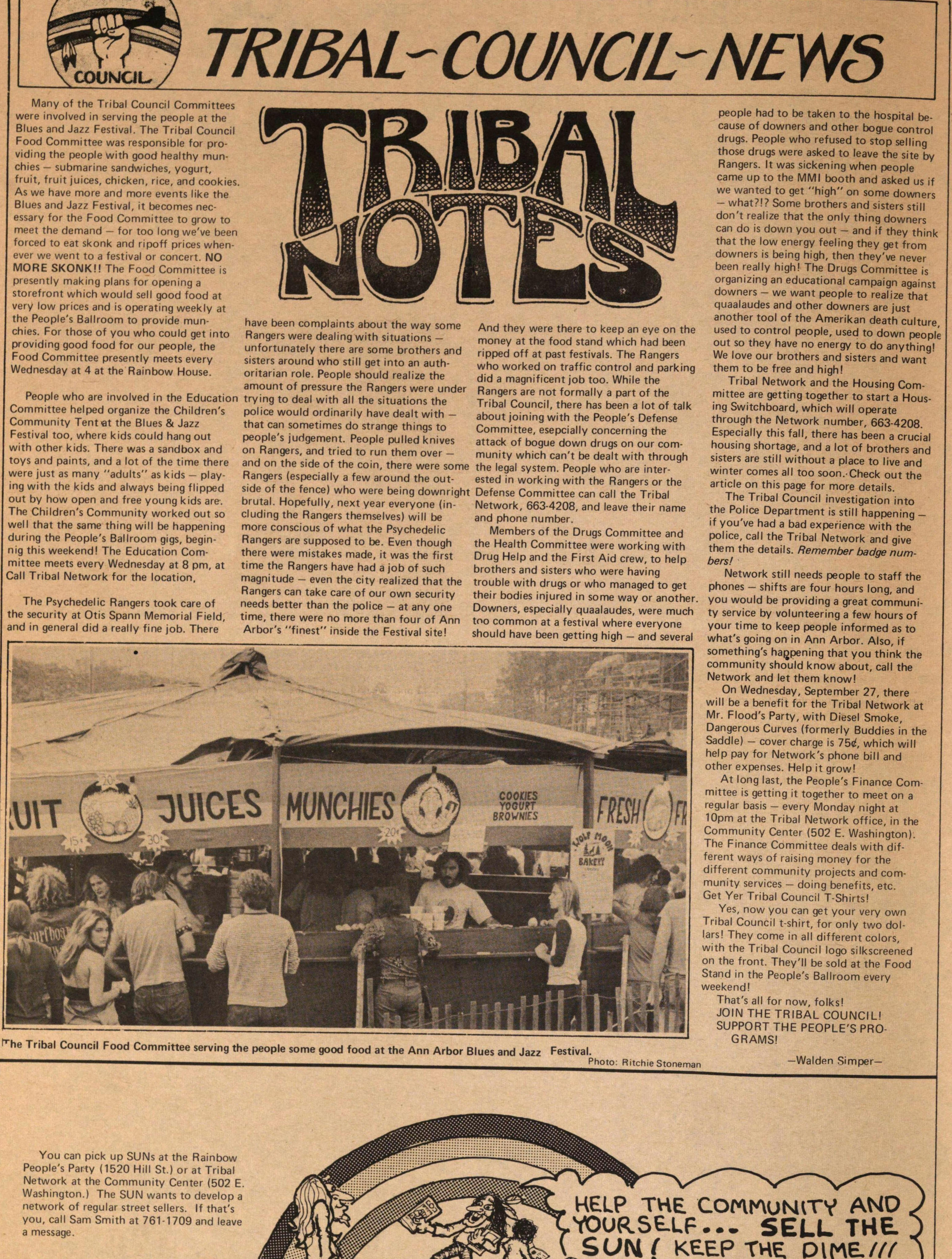 Many of the Tribal Council Committees were involved in serving the people at the Blues and Jazz Festival. The Tribal Council Food Committee was responsible for providing the people with good healthy munchies - submarine sandwiches, yogurt, fruit, fruit juices, chicken, rice, and cookies. As we have more and more events like the Blues and Jazz Festival, it becomes necessary for the Food Committee to grow to meet the demand - for too long we've been forced to eat skonk and ripoff prices whenever we went to a festival or concert. NO MORE SKONK!! The Food Committee is presently making plans for opening a storefront which would sell good food at very low prices and is operating weekly at the People's Ballroom to provide munchies. For those of you who could get into providing good food for our people, the Food Committee presently meets every Wednesday at 4 at the Rainbow House.

People who are involved n the Education Committee helped organize the Children's Community Tent at the Blues & Jazz Festival to, where kids could hang out with other kids. There was a sandbox and toys and paints, and a lot of the time there were just as many "adults" as kids - playing with the kids and always being flipped out by how open and free young kids are. The Children's Community worked out so well that the same thing will be happening during the People's Ballroom gigs, beginning this weekend! The Education Committee meets every Wednesday at 8 pm, at Call Tribal Network for the location.

The Psychedelic Rangers took care of the security at Otis Spann Memorial Field, and in general did a really fine job. There have been complaints about the way some Rangers were dealing with situations - unfortunately there are some brothers and sisters around who still get into an authoritarian role. People should realize the amount of pressure the Rangers were under trying to deal with all the situations the police would ordinarily have dealt with - that can sometimes do strange things to people's judgement. People pulled knives on Rangers, and tried to run them over - and on the side of the coin, there were some Rangers (especially a few around the outside of the fence) who were being downright brutal. Hopefully, next year everyone (including the Rangers themselves) will be more conscious of what the Psychedelic Rangers are supposed to be. Even though there were mistakes made, it was the first time the Rangers have had a job of such magnitude - even the city realized that the Rangers can take care of our own security needs better than the police - at any one time, there were no more than four of Ann Arbor's "finest" inside the Festival site! And they were there to keep an eye on the money at the food stand which had been ripped off at past festivals. The Rangers who worked on traffic control and parking did a magnificent job too. While the Rangers are not formally a part of the Tribal Council, there has been a lot of talk about joining with the People's Defense Committee, especially concerning the attack of bogue down drugs on our community which can't be dealt with through the legal system. People who are interested in working with the Rangers or the Defense Committee can cali the Tribal Network, 663-4208, and leave their name and phone number.

Members of the Drugs Committee and the Health Committee were working with Drug Help and the First Aid crew, to help brothers and sisters who were having trouble with drugs or who managed to get their bodies injured in some way or another. Downers, especially quaalaudes, were much too common at a festival where everyone should have been getting high - and several people had to be taken to the hospital because of downers and other bogue control drugs. People who refused to stop selling those drugs were asked to leave the site by Rangers. It was sickening when people came up to the MMI booth and asked us if we wanted to get "high" on some downers - what?!? Some brothers and sisters still don't realize that the only thing downers can do is down you out - and if they think that the low energy feeling they get from downers is being high, then they've never been really high! The Drugs Committee is organizing an educational campaign against downers - we want people to realize that quaalaudes and other downers are just another tool of the American death culture used to control people, used to down people out so they have no energy to do anything! We love our brothers and sisters and want them to be free and high!

Tribal Network and the Housing Committee are getting together to start a Housing Switchboard, which will operate through the Network number, 663-4208 Especially this fall, there has been a crucial housing shortage, and a lot of brothers and sisters are still without a place to live and winter comes all too soon. Check out the article on this page for more details.

The Tribal Council investigation into the Police Department is still happening - if you've had a bad experience with the police, call the Tribal Network and give them the details. Remember badge numbers!

Network still I needs people to staff the phones - shifts are four hours long, and you would be providing a great community service by volunteering a few hours of your time to keep people informed as to what's going on in Ann Arbor. Also, if something's happening that you think the community should know about, call the Network and let them know!

On Wednesday, September 27, there will be a benefit for the Tribal Network at Mr. Flood's Party, with Diesel Smoke, Dangerous Curves (formerly Buddies in the Saddle) - cover charge is 75 cents that will help pay for Network's phone bill and other expenses. Help it grow!

At long last, the People's Finance Committee is getting it together to meet on a regular basis - every Monday night at 10pm at the Tribal Network office, in the Community Center (502 E. Washington). The Finance Committee deals with different ways of raising money for the different community projects and community services - doing benefits, etc. Get Yer Tribal Council T-Shirts!

Yes, now you can get your very own Tribal Council t-shirt, for only two dollars! They come in all different colors, with the Tribal Council logo silkscreened on the front. They'll be sold at the Food Stand in the People's Ballroom every weekend!

That's all for now, folks! JOIN THE TRIBAL COUNCIL! SUPPORT THE PEOPLE'S PROGRAMS!

You can pick up SUNs at the Rainbow People's Party (1520 Hill St.) or at Tribal Network at the Community Center (502 E. Washington.) The SUN wants to develop a network of regular street sellers. If that's you, cali Sam Smith at 761-1709 and leave a message.