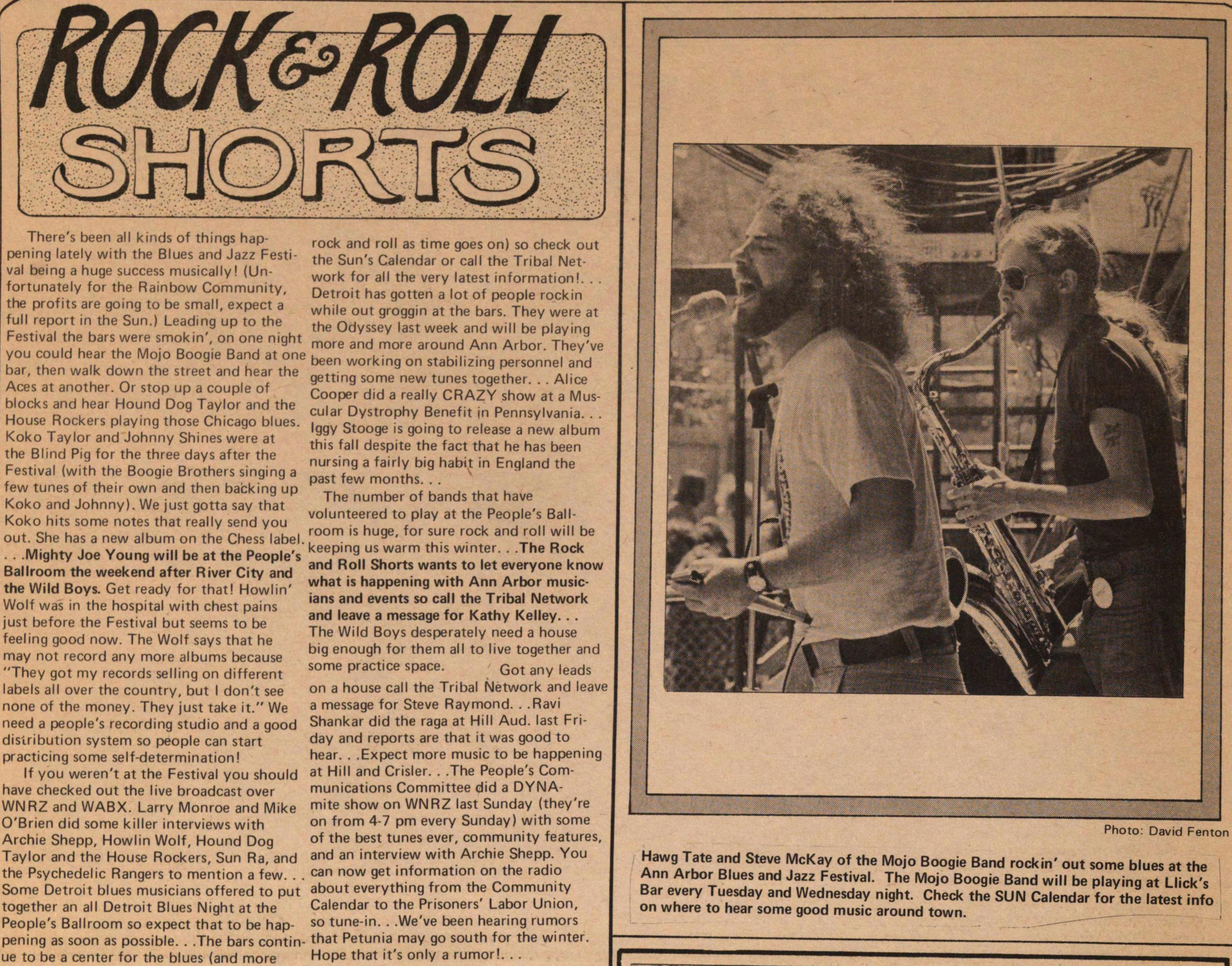 There's been all kinds of things happening lately with the Blues and Jazz Festival being a huge success musically! (Unfortunately for the Rainbow Community, the profits are going to be small, expect a full report in the Sun.) Leading up to the Festival the bars were smokin , on one night you could hear the Mojo Boogie Band at one bar, then walk down the street and hear the Aces at another. Or stop up a couple of blocks and hear Hound Dog Taylor and the House Rockers playing those Chicago blues. Koko Taylor and Johnny Shines were at the Blind Pig for the three days after the Festival (with the Boogie Brothers singing a few tunes of their own and then backing up Koko and Johnny). We just gotta say that Koko hits some notes that really send you out. She has a new album on the Chess label.

. . .Mighty Joe Young will be at the People's Ballroom the weekend after River City and the Wild Boys. Get ready for that! Howlin Wolf was in the hospital with chest pains just before the Festival but seems to be feeling good now. The Wolf says that he may not record any more albums because "They got my records selling on different labels all over the country, but I don't see none of the money. They just take it." We need a people's recording studio and a good distribution system so people can start practicing some self-determination!

If you weren't at the Festival you should have checked out the live broadcast over WNRZ and WABX. Larry Monroe and Mike O'Brien did some killer interviews with Archie Shepp, Howlin Wolf, Hound Dog Taylor and the House Rockers, Sun Ra, and the Psychedelic Rangers to mention a few. . . Some Detroit blues musicians offered to put together an all Detroit Blues Night at the People's Ballroom so expect that to be happening as soon as possible. . The bars continue to be a center for the blues (and more rock and roll as time goes on) so check out the Sun's Calendar or cali the Tribal Network for all the very latest information!. . . Detroit has gotten a lot of people rock in while out groggin at the bars. They were at the Odyssey last week and will be playing more and more around Ann Arbor. They've been working on stabilizing personnel and getting some new tunes together. . . Alice Cooper did a really CRAZY show at a Muscular Dystrophy Benefit in Pennsylvania. . . Iggy Stooge is going to release a new album this fall despite the fact that he has been nursing a fairly big habit in England the past few months.

The number of bands that have volunteered to play at the People's Ballroom is huge, for sure rock and roll will be keeping us warm this winter. . .The Rock and Roll Shorts wants to let everyone know what is happening with Ann Arbor musicians and events so call the Tribal Network and leave a message for Kathy Kelley. . . The Wild Boys desperately need a house big enough for them all to live together and some practice space.

Got any leads on a house call the Tribal Network and leave a message for Steve Raymond. . .Ravi Shankar did the raga at Hill Aud. last Friday and reports are that it was good to hear. . .Expect more music to be happening at Hill and Crisler. . .The People's Communications Committee did a DYNAmite show on WNRZ last Sunday (they're on from 4-7 pm every Sunday) with some of the best tunes ever, community features, and an interview with Archie Shepp. You can now get information on the radio about everything from the Community Calendar to the Prisoners' Labor Union, so tune-in. . .We've been hearing rumors that Petunia may go south for the winter. Hope that it's only a rumor!. . .