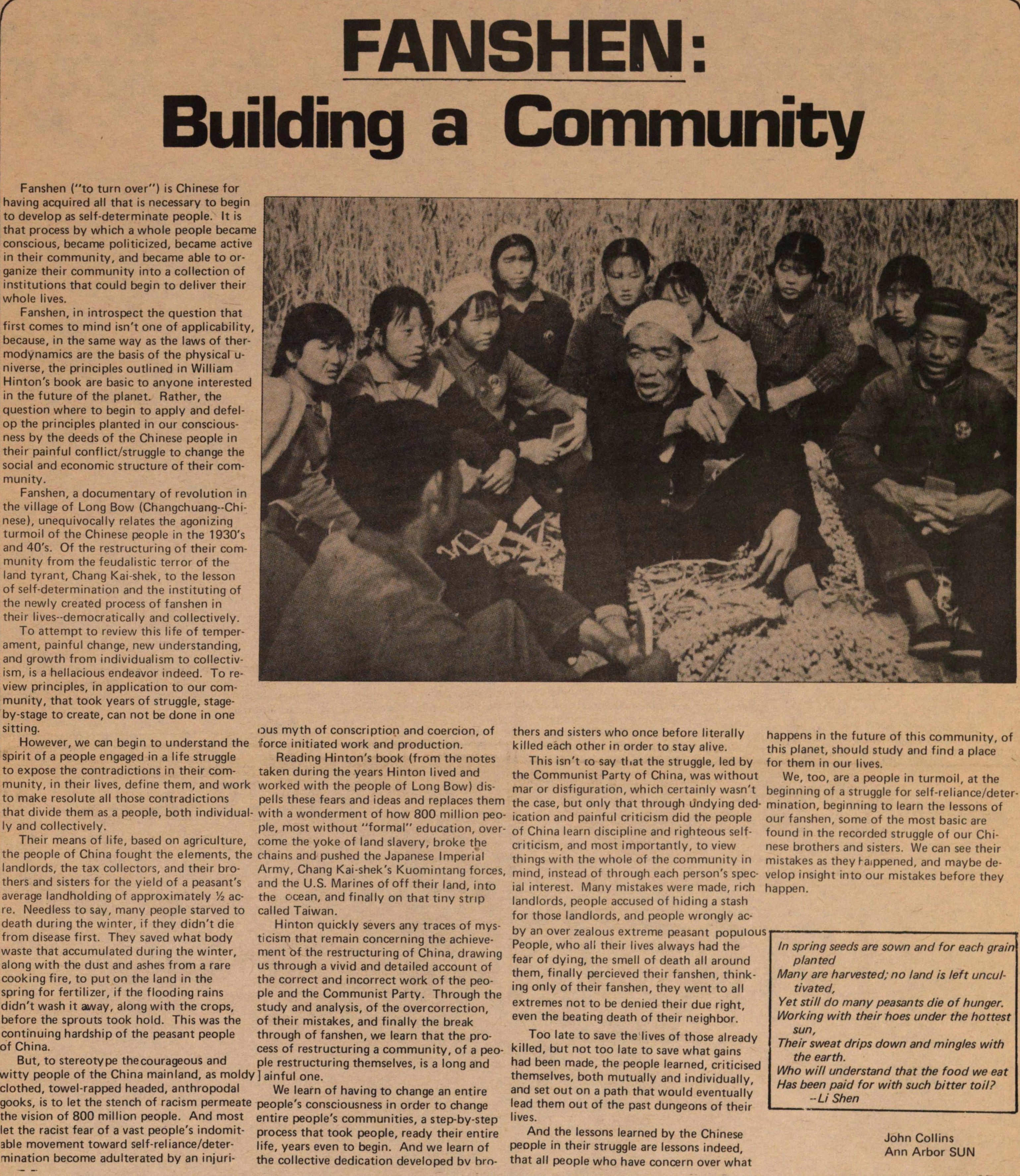 Fanshen ("to turn over") is Chinese for having acquired all that s necessary to begin to develop as self-determinate people. It is that process by which a whole people became conscious, became politicized, became active in their community, and became able to organize their community into a collection of institutions that could begin to deliver their whole lives.

Fanshen, in introspect the question that first comes to mind isn't one of applicability, because, in the same way as the laws of thermodynamics are the basis of the physical universe, the principles outlined in William Hinton's book are basic to anyone interested in the future of the planet. Rather, the question where to begin to apply and develop the principles planted in our consciousness by the deeds of the Chinese people in their painful conflict/struggle to change the social and economic structure of their community.

Fanshen, a documentary of revolution in the village of Long Bow (Changchuang--Chinese), unequivocally relates the agonizing turmoil of the Chinese people in the 1930's and 40's. Of the restructuring of their community from the feudalistic terror of the land tyrant, Chang Kai-shek, to the lesson of self-determination and the instituting of the newly created process of fanshen in their lives-democratically and collectively.

To attempt to review this life of temperament, painful change, new understanding, and growth from individualism to collectivism, is a hellacious endeavor indeed. To review principles, in application to our community, that took years of struggle, stage-by-stage to create, can not be done in one sitting.

However, we can begin to understand the spirit of a people engaged in a life struggle to expose the contradictions in their community, in their lives, define them, and work to make resolute all those contradictions that divide them as a people, both individually and collectively.

Their means of life, based on agriculture, the people of China fought the elements, the landlords, the tax collectors, and their brothers and sisters for the yield of a peasant's average landholding of approximately 1/2 acre. Needless to say, many people starved to death during the winter, if they didn't die from disease first. They saved what body waste that accumulated during the winter, along with the dust and ashes from a rare cooking fire, to put on the land in the spring for fertilizer, if the flooding rains didn't wash it away, along with the crops, before the sprouts took hold. This was the continuing hardship of the peasant people of China.

But, to stereotype the courageous and witty people of the China mainland, as moldy clothed, towel-rapped headed, anthropomorphic gooks, is to let the stench of racism permeate he vision of 800 million people. And most of the racist fear of a vast people's indomitable movement toward self-reliance/determination become adulterated by an injurious myth of conscription and coercion, of force initiated work and production.

Reading Hinton's book (from the notes taken during the years Hinton lived and worked with the people of Long Bow) dispels these fears and ideas and replaces them with a wonderment of how 800 million people, most without "formal" education, overcome the yoke of land slavery, broke the chains and pushed the Japanese Imperial Army, Chang Kai-shek's Kuomintang forces, and the U.S. Marines of off their land, into the ocean, and finally on that tiny strip called Taiwan.

Hinton quickly severs any traces of mysticism that remain concerning the achievement of the restructuring of China, drawing us through a vivid and detailed account of the correct and incorrect work of the people and the Communist Party. Through the study and analysis, of the overcorrection, of their mistakes, and finally the break through of fanshen, we learn that the process of restructuring a community, of a people restructuring themselves, is a long and painful one.

This isn't to say that the struggle, led by the Communist Party of China, was without mar or disfiguration, which certainly wasn't the case, but only that through undying dedication and painful criticism did the people of China learn discipline and righteous self criticism, and most importantly, to view things with the whole of the community in mind, instead of through each person's special interest. Many mistakes were made, rich landlords, people accused of hiding a stash for those landlords, and people wrongly accused by an over zealous extreme peasant populous People, who all their lives always had the fear of dying, the smell of death all around them, finally perceived their fanshen, thinking only of their fanshen, they went to all extremes not to be denied their due right, even the beating death of their neighbor.

Too late to save the lives of those already killed, but not too late to save what gains had been made, the people learned, criticized themselves, both mutually and individually, and set out on a path that would eventually lead them out of the past dungeons of their lives.

And the lessons learned by the Chinese people in their struggle are lessons indeed, that all people who have concern over what happens in the future of this community, of this planet, should study and find a place for them in our lives.

We, too, are a people in turmoil, at the beginning of a struggle for self-reliance/determination, beginning to learn the lessons of our fanshen, some of the most basic are found in the recorded struggle of our Chinese brothers and sisters. We can see their mistakes as they happened, and maybe develop insight into our mistakes before they happen.

In spring seeds are sown and for each grain planted

Many are harvested; no land is left uncultivated,

Yet still do many peasants die of hunger. Working with their hoes under the hottest sun,

Their sweat drips down and mingles with the earth.

Who will understand that the food we eat Has been paid for with such bitter toil?