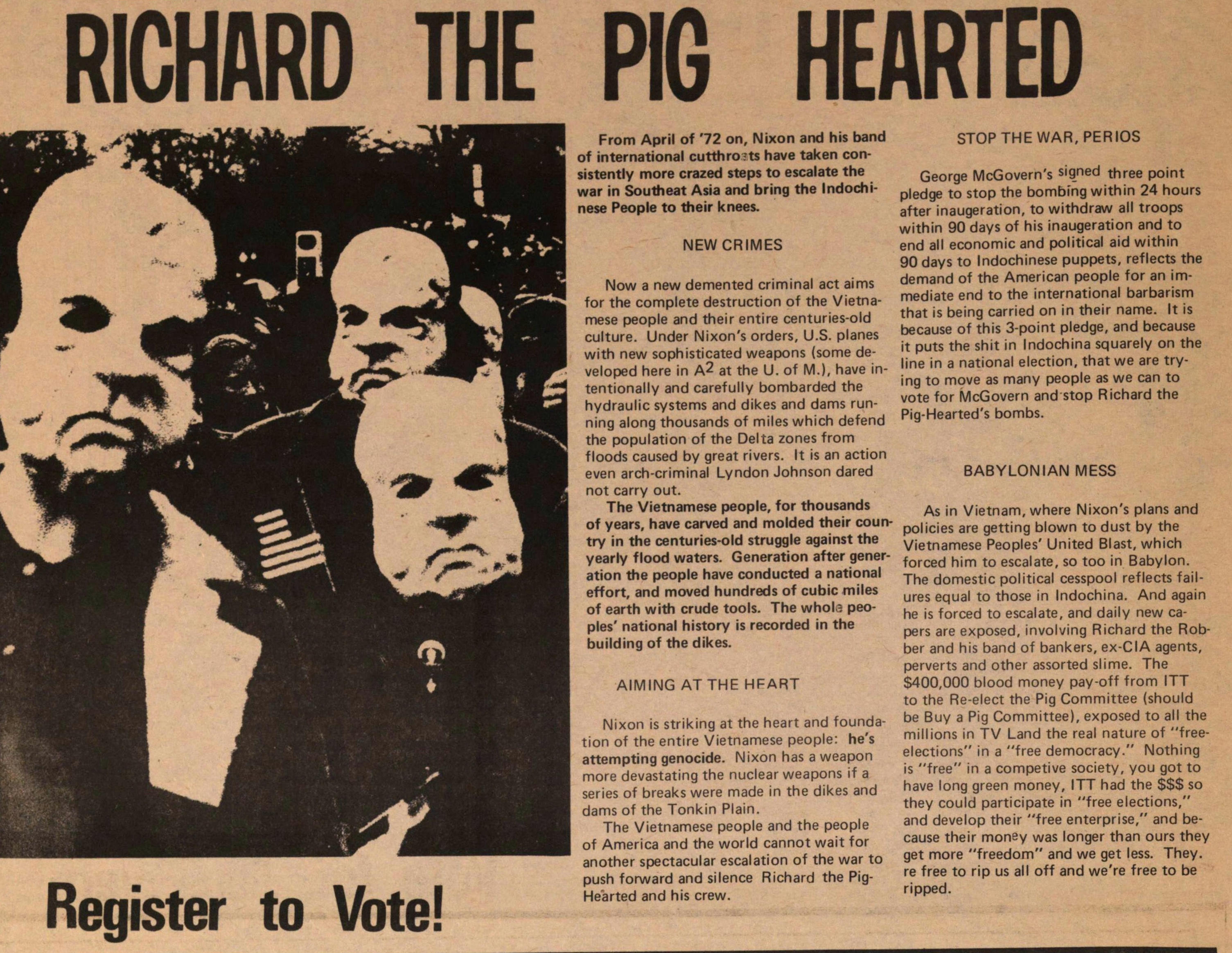 From April of '72 on, Nixon and his band of international cutthroats have taken consistently more crazed steps to escalate the war in Southeast Asia and bring the Indochinese People to their knees.

Now a new demented criminal act aims for the complete destruction of the Vietnamese people and their entire centuries-old culture. Under Nixon's orders, U.S. planes with new sophisticated weapons (some developed here in A2 at the U. of M.), have intentionally and carefully bombarded the hydraulic systems and dikes and dams running along thousands of miles which defend the population of the Delta zones from floods caused by great rivers. It is an action even arch-criminal Lyndon Johnson dared not carry out.

The Vietnamese people, for thousands of years, have carved and molded their country in the centuries-old struggle against the yearly flood waters. Generation after generation the people have conducted a national effort, and moved hundreds of cubic miles of earth with crude tools. The whole peoples' national history is recorded in the building of the dikes.

Nixon is striking at the heart and foundation of the entire Vietnamese people: he's attempting genocide. Nixon has a weapon more devastating than nuclear weapons if a series of breaks were made in the dikes and dams of the Tonkin Plain.

The Vietnamese people and the people of America and the world cannot wait for another spectacular escalation of the war to push forward and silence Richard the Pig-Hearted and his crew.

George McGovern's signed three point pledge to stop the bombing within 24 hours after inauguration, to withdraw all troops within 90 days of his inauguration and to end all economic and political aid within 90 days to Indochinese puppets, reflects the demand of the American people for an immediate end to the international barbarism that is being carried on in their name. It is because of this 3-point pledge, and because it puts the shit in Indochina squarely on the line in a national election, that we are trying to move as many people as we can to vote for McGovern and stop Richard the Pig-Hearted's bombs.

As in Vietnam, where Nixon's plans and policies are getting blown to dust by the Vietnamese Peoples' United Blast, which forced him to escalate, so too in Babylon. The domestic political cesspool reflects failures equal to those in Indochina. And again he is forced to escalate, and daily new capers are exposed, involving Richard the Robber and his band of bankers, ex-CIA agents, perverts and other assorted slime. The $400,000 blood money pay-off from ITT to the Re-elect the Pig Committee (should be Buy a Pig Committee), exposed to all the millions in TV Land the real nature of "free-elections" in a "free democracy." Nothing is "free" in a competitive society, you got to have long green money, ITT had the $$$ so they could participate in "free elections," and develop their "free enterprise," and because their money was longer than ours they get more "freedom" and we get less. They're free to rip us all off and we're free to be ripped.