Vs. The Three Point Pledge 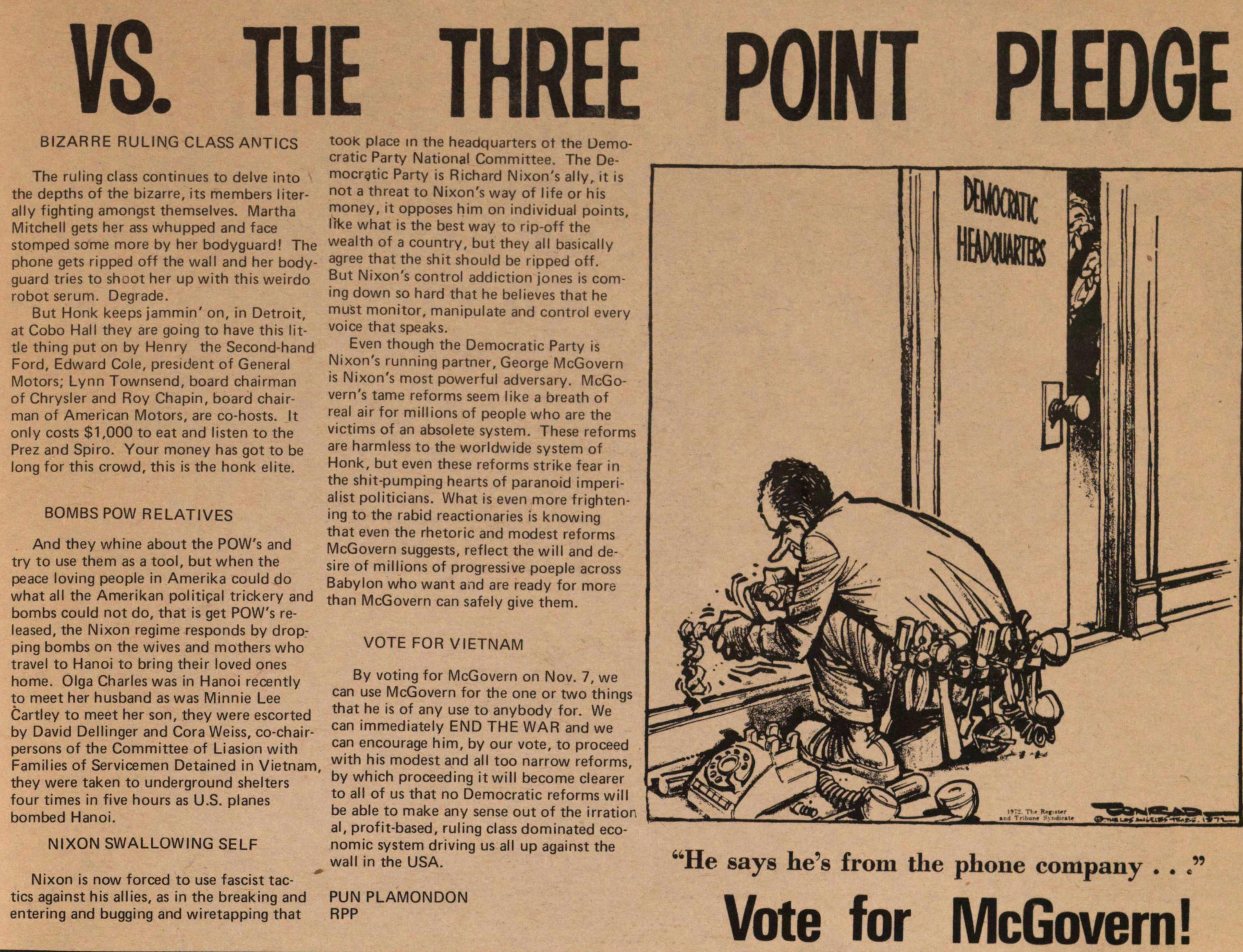 VS. THE THREE POINT PLEDGE

The ruling class continues to delve into the depths of the bizarre, its members literally fighting amongst themselves. Martha Mitchell gets her ass whupped and face stomped some more by her bodyguard! The phone gets ripped off the wall and her bodyguard tries to shoot her up with this weirdo robot serum. Degrade.

But Honk keeps jammin' on, in Detroit, at Cobo Hall they are going to have this little thing put on by Henry the Second-hand Ford, Edward Cole, president of General Motors; Lynn Townsend, board chairman of Chrysler and Roy Chapin, board chairman of American Motors, are co-hosts. It only costs $1,000 to eat and listen to the Prez and Spiro. Your money has got to be long for this crowd, this is the honk elite.

And they whine about the POW's and try to use them as a tool, but when the peace loving people in Amerika could do what all the Amerikan political trickery and bombs could not do, that is get POW's released, the Nixon regime responds by dropping bombs on the wives and mothers who travel to Hanoi to bring their loved ones home. Olga Charles was in Hanoi recently to meet her husband as was Minnie Lee Cartley to meet her son, they were escorted by David Dellinger and Cora Weiss, co-chairpersons of the Committee of Liaison with Families of Servicemen Detained in Vietnam, they were taken to underground shelters four times in five hours as U.S. planes bombed Hanoi.

Nixon is now forced to use fascist tactics against his allies, as in the breaking and entering and bugging and wiretapping that took place in the headquarters of the Democratic Party National Committee. The Democratic Party is Richard Nixon's ally, it is not a threat to Nixon's way of life or his money, it opposes him on individual points, like what is the best way to rip-off the wealth of a country, but they all basically agree that the shit should be ripped off. But Nixon's control addiction jones is coming down so hard that he believes that he must monitor, manipulate and control every voice that speaks.

Even though the Democratic Party is Nixon's running partner, George McGovern is Nixon's most powerful adversary. McGovern's tame reforms seem like a breath of real air for millions of people who are the victims of an obsolete system. These reforms are harmless to the worldwide system of Honk, but even these reforms strike fear in the shit-pumping hearts of paranoid imperialist politicians. What is even more frightening to the rabid reactionaries is knowing that even the rhetoric and modest reforms McGovern suggests, reflect the will and desire of millions of progressive people across Babylon who want and are ready for more than McGovern can safely give them.

By voting for McGovern on Nov. 7, we can use McGovern for the one or two things that he is of any use to anybody for. We can immediately END THE WAR and we can encourage him, by our vote, to proceed with his modest and all too narrow reforms, by which proceeding it will become clearer to all of us that no Democratic reforms will be able to make any sense out of the irrational, profit-based, ruling class dominated economic system driving us all up against the wall in the USA.