I Ain't Singing Charlie Or, What To Do When The F.b.i. Calls 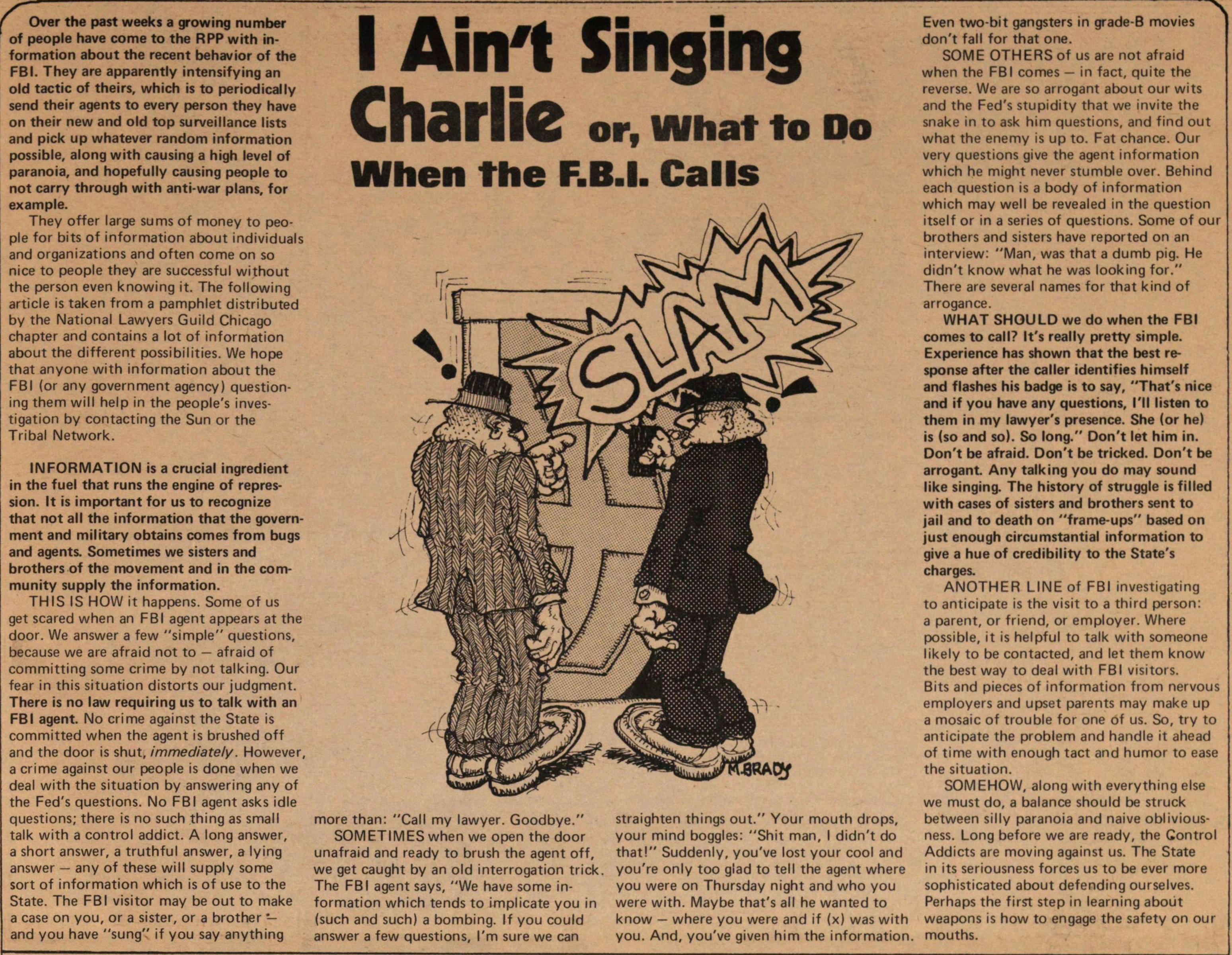 I Ain't Singing Charlie or, What to Do When the F.B.I. Calls

Over the past weeks a growing number of people have come to the RPP with information about the recent behavior of the FBI. They are apparently intensifying an old tactic of theirs, which is to periodically send their agents to every person they have on their new and old top surveillance lists and pick up whatever random information possible, along with causing a high level of paranoia, and hopefully causing people to not carry through with anti-war plans, for example.

They offer large sums of money to people for bits of information about individuals and organizations and often come on so nice to people they are successful without the person even knowing it. The following article is taken from a pamphlet distributed by the National Lawyers Guild Chicago chapter and contains a lot of information about the different possibilities. We hope that anyone with information about the FBI (or any government agency) questioning them will help in the people's investigation by contacting the Sun or the Tribal Network.

INFORMATION is a crucial ingredient in the fuel that runs the engine of repression. It is important for us to recognize that not all the information that the government and military obtains comes from bugs and agents. Sometimes we sisters and brothers of the movement and in the community supply the information.

THIS IS HOW it happens. Some of us get scared when an FBI agent appears at the door. We answer a few "simple" questions, because we are afraid not to -- afraid of committing some crime by not talking. Our fear in this situation distorts our judgment. There is no law requiring us to talk with an FBI agent. No crime against the State is committed when the agent is brushed off and the door is shut, immediately. However, a crime against our people is done when we deal with the situation by answering any of the Fed's questions. No FBI agent asks idle questions; there is no such thing as small talk with a control addict. A long answer, a short answer, a truthful answer, a lying answer -- any of these will supply some sort of information which is of use to the State. The FBI visitor may be out to make a case on you, or a sister, or a brother -- and you have "sung" if you say anything more than: "Call my lawyer. Goodbye."

SOMETIMES when we open the door unafraid and ready to brush the agent off, we get caught by an old interrogation trick. The FBI agent says, "We have some information which tends to implicate you in (such and such) a bombing. If you could answer a few questions, I'm sure we can straighten things out." Your mouth drops, your mind boggles: "Shit man, I didn't do that!" Suddenly, you've lost your cool and you're only too glad to tell the agent where you were on Thursday night and who you were with. Maybe that's all he wanted to know -- where you were and if (x) was with you. And, you've given him the information. Even two-bit gangsters in grade-B movies don't fall for that one.

SOME OTHERS of us are not afraid when the FBI comes -- in fact, quite the reverse. We are so arrogant about our wits and the Fed's stupidity that we invite the snake in to ask him questions, and find out what the enemy is up to. Fat chance. Our very questions give the agent information which he might never stumble over. Behind each question is a body of information which may well be revealed in the question itself or in a series of questions. Some of our brothers and sisters have reported on an interview: "Man, was that a dumb pig. He didn't know what he was looking for." There are several names for that kind of arrogance.

WHAT SHOULD we do when the FBI comes to call? It's really pretty simple. Experience has shown that the best response after the caller identifies himself and flashes his badge is to say, "That's nice and if you have any questions, I'll listen to them in my lawyer's presence. She (or he) is (so and so). So long." Don't let him in. Don't be afraid. Don't be tricked. Don't be arrogant. Any talking you do may sound like singing. The history of struggle is filled with cases of sisters and brothers sent to jail and to death on "frame-ups" based on just enough circumstantial information to give a hue of credibility to the State's charges.

ANOTHER LINE of FBI investigating to anticipate is the visit to a third person: a parent, or friend, or employer. Where possible, it is helpful to talk with someone likely to be contacted, and let them know the best way to deal with FBI visitors. Bits and pieces of information from nervous employers and upset parents may make up a mosaic of trouble for one of us. So, try to anticipate the problem and handle it ahead of time with enough tact and humor to ease the situation.

SOMEHOW, along with everything else we must do, a balance should be struck between silly paranoia and naive obliviousness. Long before we are ready, the Control Addicts are moving against us. The State in its seriousness forces us to be ever more sophisticated about defending ourselves. Perhaps the first step in learning about weapons is how to engage the safety on our mouths.