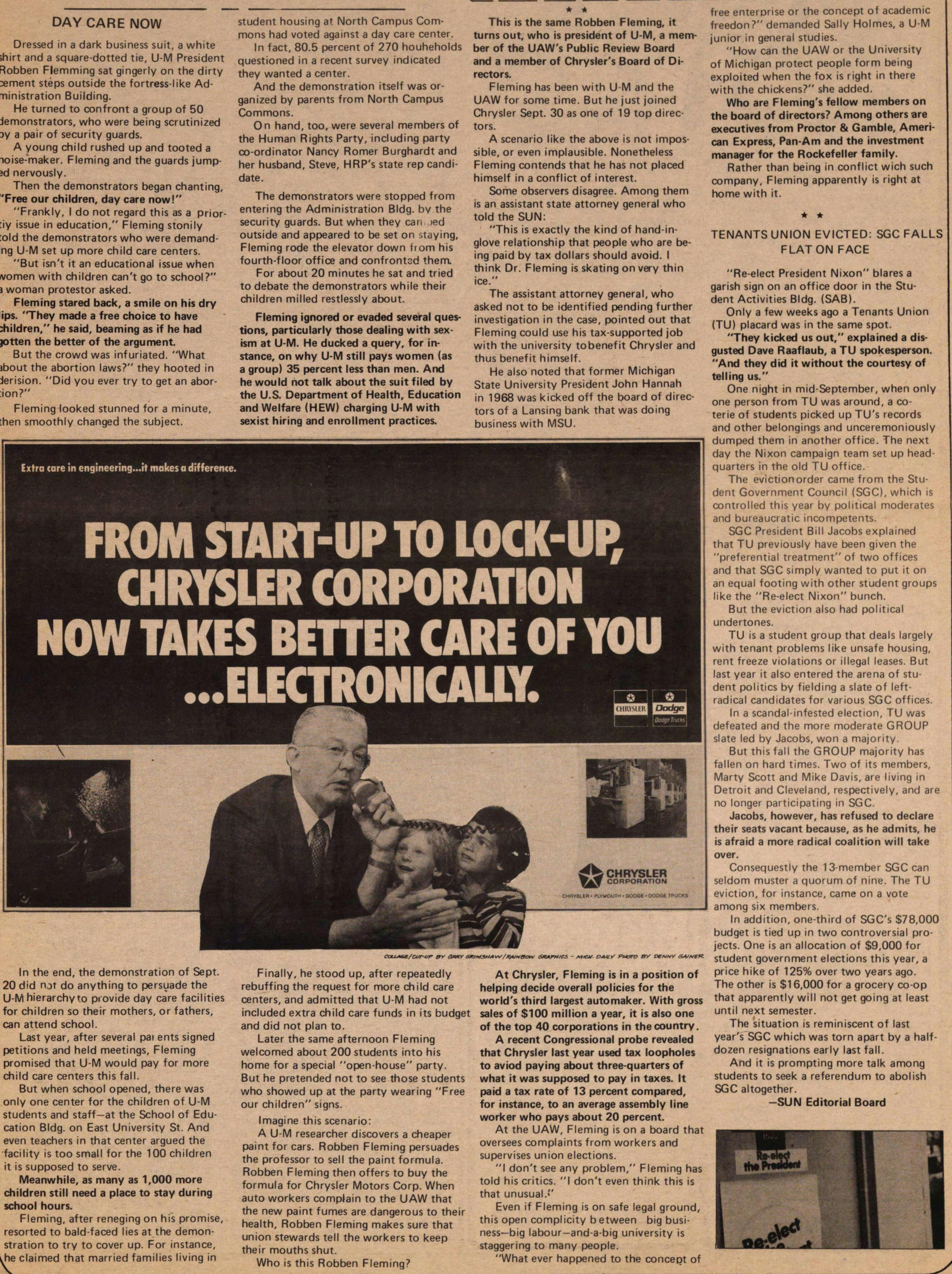 In the end, the demonstration of Sept. 20 did not do anything to persuade the U-M hierarchy to provide day care facilities for children so their mothers, or fathers, can attend school. Last year, after several pai ents signed petitions and held meetings, Fleming promised that U-M would pay for more child care centers this fall. But when school opened, there was only one center for the children of U-M students and staff- at the School of Educatión Bldg. on East University St. And even teachers in that center argued the facility is too small for the 100 children it is supposed to serve. Meanwhile, as many as 1,000 more children still need a place to stay during school hours. Fleming, after reneging on his promise, resorted to baldfaced lies at the demonstration to try to cover up. For instance, khe claimed that married families living in Finally, he stood up, after repeatedly rebuffing the request for more child care centers, and admitted that U-M had not ncluded extra child care funds n ts budget and did not plan to. Later the same afternoon Fleming welcomed about 200 students into his home for a special "open-house" party. But he pretended not to see those students who showed up at the party wearing "Free our children" signs. Imagine this scenario: A U-M researcher discovers a cheaper paint for cars. Robben Fleming persuades the professor to sell the paint formula. Robben Fleming then offers to buy the formula for Chrysler Motors Corp. When auto workers complain to the UAW that the new paint fumes are dangerous to their health. Robben Fleming makes sure that union stewards teil the workers to keep their mouths shut. Who is this Robben Flemina? At Chrysler, Fleming is in a position of helping decide overall policies for the world's third largest automaker. With gross sales of $100 million a year, it is also one of the top 40 corporations in the country. A recent Congressional probe revealed that Chrysler last year used tax loopholes to aviod paying about three-quarters of what it was supposed to pay in taxes. It paid a tax rate of 13 percent compared, for instance, to an average assembly line worker who pays about 20 percent. At the UAW, Fleming is on a board that oversees complaints from workers and supervises unión elections. "I don't see any problem," Fleming has told his critics. "I don't even think this is that unusual." Even if Fleming is on safe legal ground, this open complicity between big business-big labour- and-a-big university is staggering to many people. "What ever happened to the concept of free enterprise or the concept of academie treedon?" demanded Sally Holmes, a U-M junior n general studies. "How can the UAW or the University of Michigan protect people form being exploited when the fox s right in there with the chickens?" she added. Who are Fleming's fellow members on the board of directors? Among others are executives from Proctor & Gamble, American Express, Pan-Am and the nvestment manager for the Rockefeller family. Rather than being in conflict wich such company, Fleming apparently is right at home with it. TENANTS UNION EVICTED: SGC FALLS FLAT ON FACE "Re-elect President Nixon" blares a garish sign on an office door in the Student Activities Bldg. (SAB). Only a few weeks ago a Tenants Union (TU) placard was in the same spot. "They kicked us out," explained a dis gusted Dave Raaflaub, a TU spokesperson. "And they did t without the courtesy of telling us." One night in mid-September, when only one person from TU was arotind, a coterie of students picked up TU's records and other belongings and unceremoniously dumped them in another office. The next day the Nixon campaign team set up headquarters in the old TU office. The evictionorder came from the Student Government Council (SGC), which is controlled this year by political moderates and bureaucratie incompetents. SGC President Bill Jacobs explained that TU previously have been given the "preferential treatment" of two offices and that SGC simply wanted to put it on an equal footing with other student groups like the "Re-elect Nixon" bunch. But the eviction also had political undertones. TU is a student group that deals largely with tenant problems like unsafe housing, rent freeze violations or i I legal leases. But last year it also entered the arena of student politics by fielding a slate of leftradical candidates for various SGC offices. In a scandalinfested election, TU was defeated and the more moderate GROUP slate led by Jacobs, won a majority. But this fall the GROUP majority has fallen on hard times. Two of its members, Marty Scott and Mike Davis, are living in Detroit and Cleveland, respectively, and are no longer participating in SGC. Jacobs, however, has refused to declare their seats vacant because, as he admits, he is afraid a more radical coalition will take over. Consequestly the 13-member SGC can seldom muster a quorum of nine. The TU eviction, for nstance, came on a vote among six members. In addition, one-third of SGC's $78,000 budget is tied up in two controversial projects. One is an allocation of $9,000 for student government elections this year, a price hike of 125% over two years ago. The other is $1 6,000 for a grocery co-op that apparently will not get going at least until next semester. The situation is reminiscent of last year's SGC which was torn apart by a halfdozen resignations early last fall. And it is prompting more talk among students to seek a referendum to abolish SGC altogether.