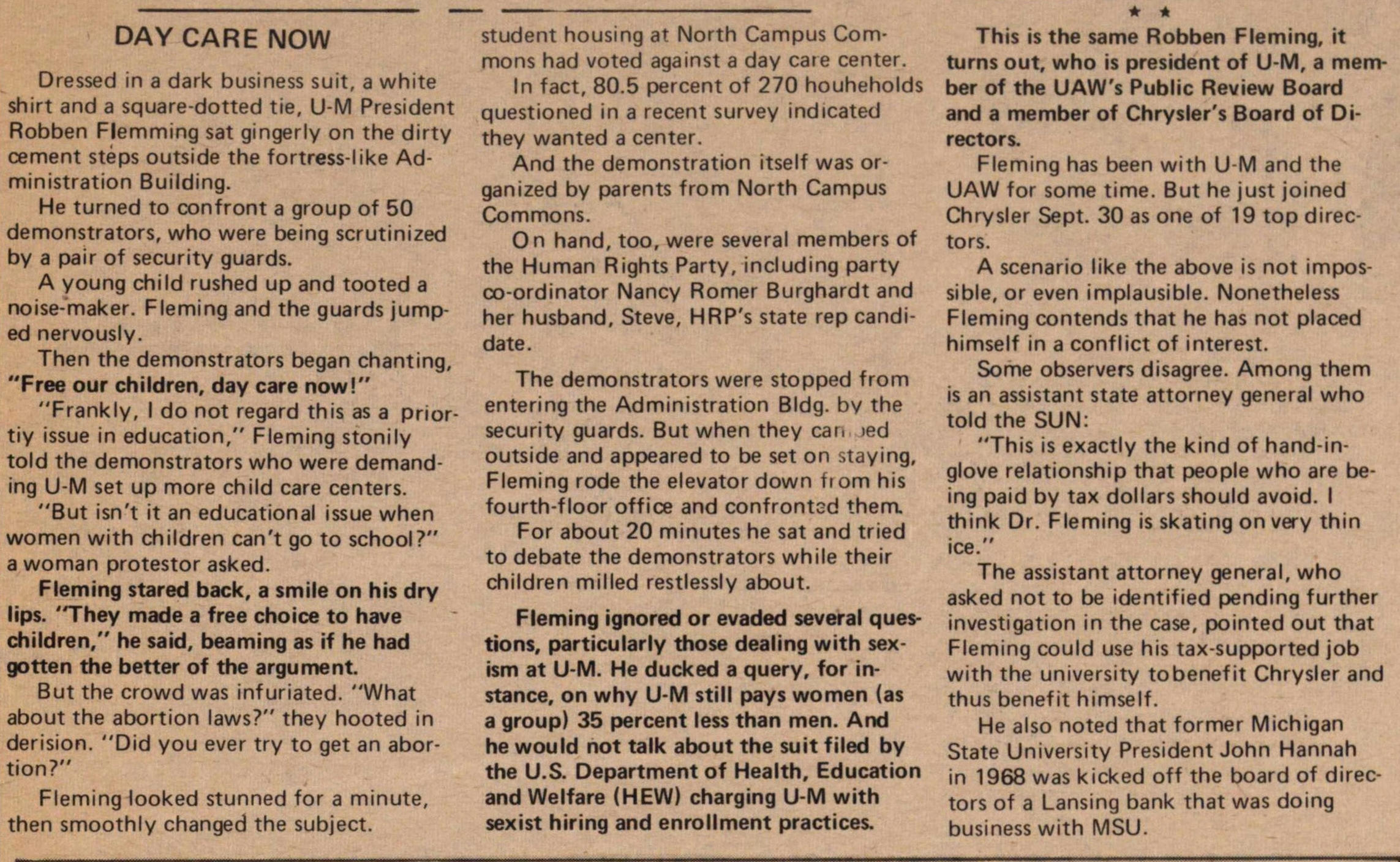 Dressed n a dark business suit, a white shirt and a square-dotted tie, U-M President Robben Flemming sat gingerly on the dirty cement steps outside the fortress-like Administration Building. He turned to confront a group of 50 demonstrators, who were being scrutinized by a pair of security guards. A young child rushed up and tooted a noise-maker. Fleming and the guards jumped nervously. Then the demonstrators began chanting, "Free our children, day care now!" "Frankly, I do not regard this as a priortiy issue in education," Fleming stonily told the demonstrators who were demanding U-M set up more child care centers. "But isn't it an educational issue when women with children can't go to school?" a woman protestor asked. Fleming stared back, a smile on nis dry lips. 'They made a free choice to have children," he said, beaming as if he had gotten the better of the argument. But the crowd was infuriated. "What about the abortion laws?" they hooted in derision. "Did you ever try to get an abortion?" Fleming looked stunned for a minute, then smoothly changed the subject. student housing at North Campus Commons had voted against a day care center. In f act, 80.5 percent of 270 houheholds questioned n a recent survey ndicated they wanted a center. And the demonstration itself was organized by parents from North Campus Commons. On hand, too, were several members of the Human Rights Party, including party co-ordinator Nancy Romer Burghardt and her husband, Steve, HRP's state rep candidate. The demonstrators were stopped from entering the Administration Bldg. bv the security guards. But when they cari ed outside and appeared to be set on staying, Fleming rode the elevator down fiom his fourth-f loor office and confrontsd them. For about 20 minutes he sat and tried to debate the demonstrators white their children milled restlessly about. Fleming ignored or evaded several questions, particularly those dealing with sexism at U-M. He ducked a query, for instance, on why U-M still pays women (as a group) 35 percent less than men. And he would not talk about the suit f iled by the U.S. Department of Health, Education and Welfare (HEW) charging U-M with sexist hiring and enrollment practices. This is the same Robben Fleming, it turns out, who is president of U-M, a member of the UAW's Public Review Board and a member of Chrysler's Board of Directors. Fleming has been with U-M and the UAW for some time. But he just joined Chrysler Sept. 30 as one of 19 top directors. A scenario like the above is not impossible, or even implausible. Nonetheless Fleming contends that he has not placed himself in a conflict of interest. Some observers disagree. Among them is an assistant state attorney general who told the SUN: "This is exactly the kind of hand-inglove relationship that people who are being paid by tax dollars should avoid. I think Dr. Fleming is skating on very thin ice." The assistant attorney general, who asked not to be identified pending further investigaron in the case, pointed out that Fleming could use his tax-supported job with the university tobenefit Chrysler and thus benefit himself. He also noted that former Michigan State University President John Hannah in 1968 was kicked off the board of directors of a Lansing bank that was doing business with MSU.