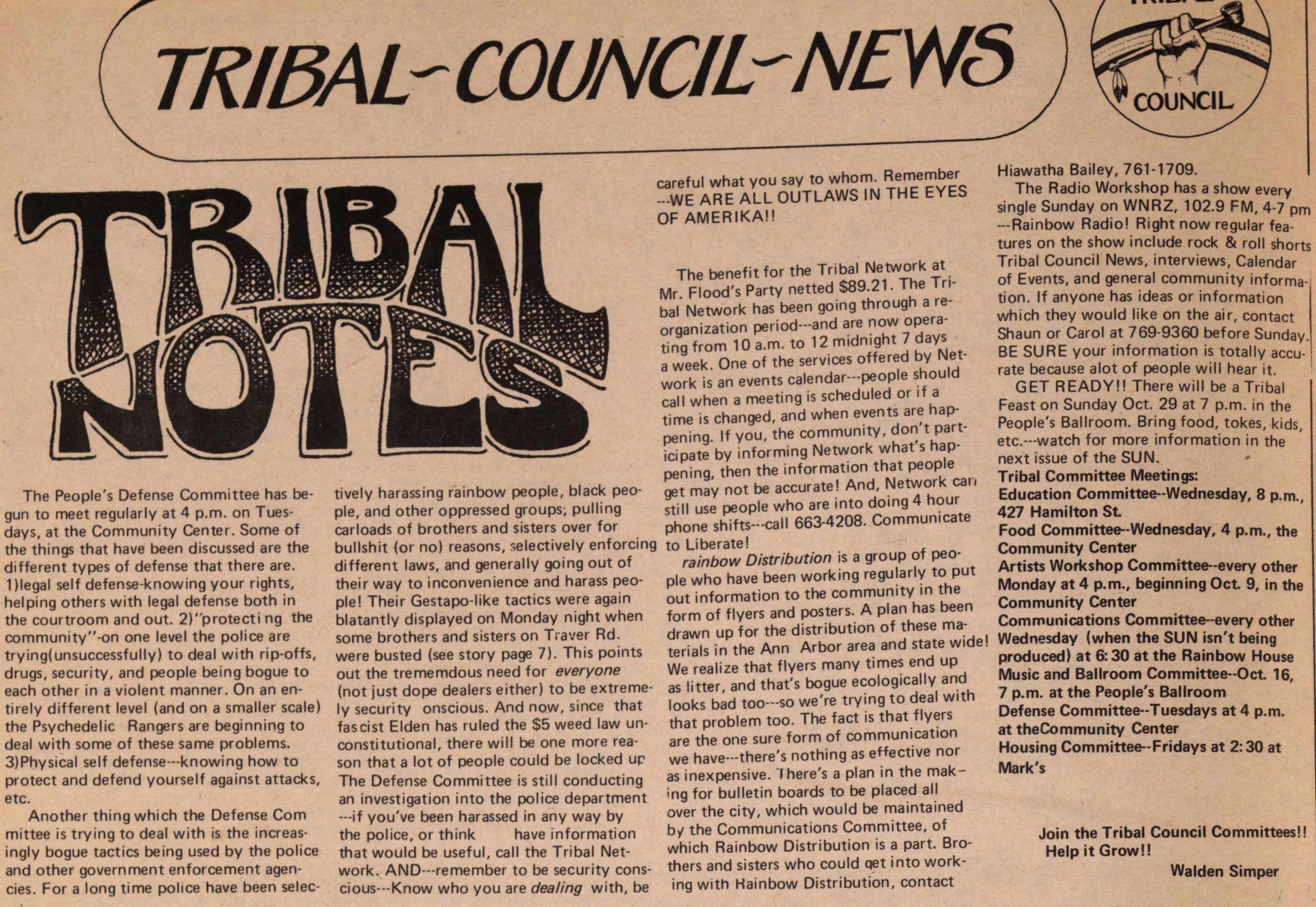 The People's Defense Committee has begun to meet regularly at 4 p.m. on Tuesdays, at the Community Center. Some of the things that have been discussed are the different types of defense that there are. 1 1legal self defense-knowing your rights, helping others with legal defense both n the courtroom and out. 2)"protecti ng the community"-on one level the pólice are trying(unsuccessfully) to deal with rip-offs, drugs, security, and people being bogue to each other in a violent manner. On an entirely different level (and on a smaller scale) the Psychedelic Rangers are beginning to deal with some of these same problems. 3)Physical self defense--knowing how to protect and defend yourself against attacks, etc. Another thing which the Defense Com mittee is trying to deal with is the increasingly bogue tactics being used by the pólice and other government enforcement agencies. For a long time pólice have been tively harassing rainbow people, black people, and other oppressed groups, puiling carloads of brothers and sisters over for bullshit (or no) reasons, selectively enforcing different laws, and generally going out of their way to nconvenience and harass people! Their Gestapo-like tactics were again blatantly displayed on Monday night when some brothers and sisters on Traver Rd. were busted (see story page 7). Th is points out the trememdous need for everyone (not just dope dealers either) to be extremely security onscious. And now, since that fascist Elden has ruled the $5 weed law unconstitutional, there will be one more reason that a lot of people could be locked up The Defense Committee is still conducting an investigaron into the pólice department --f you've been harassed in any way by the pólice, or think have information that would be useful, cali the Tribal Network. AND---remember to be security conscious--Know who you are dealing with, be areful what you say to whom. Remember -WE ARE ALL OUTLAWS IN THE EYES DF AMERIKA!! The benefit for the Tribal Network at Mr Flood's Party netted $89.21. The Tribal Network has been going through a reorganization period-and are now operatngfrom10a.m.to12midnight7days a week. One of the services offered by Network s an events calendar-people should cali when a meeting is scheduled or it a time is changed, and when events are happening. If you, the community, don t particípate by informing Network what s happening, then the information that people pet may not be accurate! And, Network car, Still use people who are into domg 4 hour phone shifts-call 663-4208. Commun.cate to Libérate! rainbow Distribution is a group of people who have been working regularly to put out information to the community in the form of flyers and posters. A plan has been drawn up for the distribution of these materials in the Ann Arbor area and state wide! We realize that flyers many times end up as litter, and that's bogue ecologically and looks bad too -so we're trying to deal with that problem too. The fact is that flyers are the one sure form of communication we have-there's nothing as eective nor as inexpensive. "I here's a plan in the making for bulletin boards to be placed all over the city, which would be maintained by the Communications Committee, of which Rainbow Distribution is a part. Brothers and sisters who could qet into working with Kainbow Distribution, contact Hiawatha Bailey, 761-1709. The Radio Workshop has a show every single Sunday on WNRZ, 102.9 FM, 4-7 pm - Rainbow Radio! Right now regular features on the show include rock & roll shorts Tribal Council News, interviews. Calendar of Events, and general community information. If anyone has ideas or information which they would like on the air, contact Shaun or Carol at 769-9360 before Sunday. BE SURE your information is totally accurate because alot of people will hear it. GET READYÜ There will be a Tribal Feast on Sunday Oct. 29 at 7 p.m. in the People's Ballroom. Bring food, tokes, kids, etc.- watch for more information in the next issue of the SUN. Tribal Committee Meetings: Education Committee-Wednesday, 8 p.m., 427 Hamilton St. Food Committee-Wednesday, 4 p.m., the Community Center Artists Workshop Committee-every other Monday at 4 p.m., beginning Oct. 9, in the Community Center Communications Committee-every other Wednesday ( when the SUN isn't being produced) at 6: 30 at the Rainbow House Music and Ballroom Committee -Oct. 16, 7 p.m. at the People's Ballroom Defense Committee-Tuesdays at 4 p.m. at theCommunity Center Housing Committee-Fridays at 2: 30 at Mark's Join the Tribal Council Committeesü Help it Growü