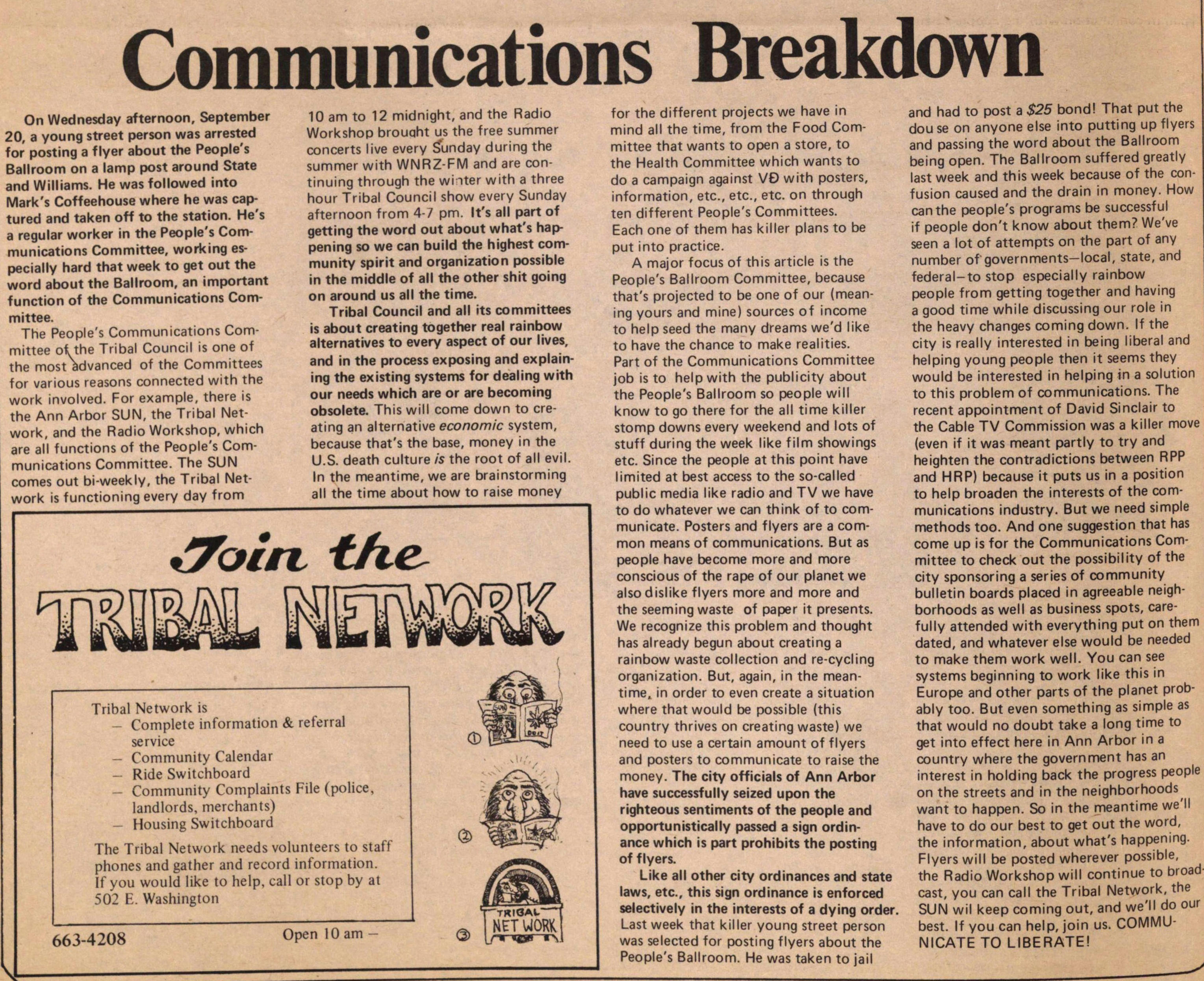 On Wednesday afternoon. September 20, a young street person was arrested for posting a f lyer about the People's Ballroom on a lamp post around State and Williams. He was followed into Mark's Coffeehouse where he was captured and taken off to the station. He's a regular worker in the People's Communications Committee, working especially hard that week to get out the word about the Ballroom, an important function of the Communications Committee. The People's Communications Committee oi the Tribal Council is one of the most advanced of the Committees for various reasons connected with the work involved. For example, there is the Ann Arbor SUN, the Tribal Network, and the Radio Workshop, which are all functions of the People's Communications Committee. The SUN comes out bi-weekly, the Tribal Network is functioning every day from 10 am to 12 midnight, and the Radio Workshop brouqht us the free summer concerts live every Sunday during the summer with WNRZ-FM and are continuing through the wi iter with a three hour Tribal Council show every Sunday afternoon from 4-7 pm. It's all part of getting the word out about what's happening so we can build the highest community spirit and organization possible in the middle of all the other shit going on around us all the time. Tribal Council and all its committees is about creating together real rainbow alternatives to every aspect of our lives, and in the process exposing and explaining the existing systems for dealing with our needs which are or are becoming obsolete. This will come down to creating an alternative economie system, because that's the base, money in the U.S. death culture is the root of all evil. In the meantime, we are brainstorming all the time about how to raise money for the different projects we have in mind all the time, from the Food Committee that wants to open a store, to the Health Committee which wants to do a campaign against VB with posters, information, etc., etc., etc. on through ten different People's Committees. Each one of them has killer plans to be put into practice. A major focus of this article is the People's Ballroom Committee, because that's projected to be one of our (meaning yours and mine) sources of income to help seed the many dreams we'd like to have the chance to make realities. Part of the Communications Committee job is to help with the publicity about the People's Ballroom so people will know to go there for the all time killer stomp downs every weekend and lots of stuff during the week like film showings etc. Since the people at this point have limited at best access to the so-called public media like radio and TV we have to do whatever we can think of to communicate. Posters and flyers are a common means of Communications. But as people have become more and more conscious of the rape of our planet we alsodisiike flyers more and more and the seeming waste of paper it presents. We recognize this problem and thought has already begun about creating a rainbow waste collection and re-cycling organization. But, again, in the meantime, in order to even créate a situation where that would be possible (this country thrives on creating waste) we need to use a certain amount of flyers and posters to communicate to raise the money. The city officials of Ann Arbor have successf ully seized upon the righteous sentiments of the people and opportunistically passed a sign ordinance which is part prohibits the posting of flyers. Like all other city ord nances and state laws, etc, this sign ordinance is enforced selectively in the nterests of a dying order. Last week that killer young street person was selected for posting flyers about the People's Ballroom. He was taken to jail and had to post a $25 bond! That put the dou se on anyone else nto putting up flyers and passing the word about the Ballroom being open. The Ballroom suffered greatly last week and this week because of the confusión caused and the drain in money. How can the people's programs be successful if people don't know about them? We've seen a lot of attempts on the part of any number of governments-local, state, and federal-to stop especially rainbow people from getting together and having a good time while discussing our role in the heavy changes coming down. If the city is really nterested in being liberal and helping young people then t seems they would be interested in helping in a solution to this problem of Communications. The recent appointment of David Sinclair to the Cable TV Commission was a killer move (even f t was meant partly to try and heighten the contradictions between RPP and HRP) because it puts us in a position to help broaden the interests of the communications industry. But we need simple methods too. And one suggestion that has come up is for the Communications Committee to check out the possibil ity of the city sponsoring a series of community bulletin boards placed in agreeable neighborhoods as well as business spots, carefully attended with everything put on them dated, and whatever else would be needed to make them work well. You can see systems beginning to work like this in Europe and other parts of the planet probably too. But even something as simple as that would no doubt take a long time to get into effect here in Ann Arbor in a country where the government has an interest in holding back the progress people on the streets and in the neighborhoods want to happen. So in the meantime we'll have to do our best to get out the word, the information, about what's happening. Flyers will be posted wherever possible, the Radio Workshop will continue to broad cast, you can cali the Tribal Network, the SUN wil keep coming out, and we'll do our best. If you can help, join us. COMMUNICATETO LIBÉRATE! '