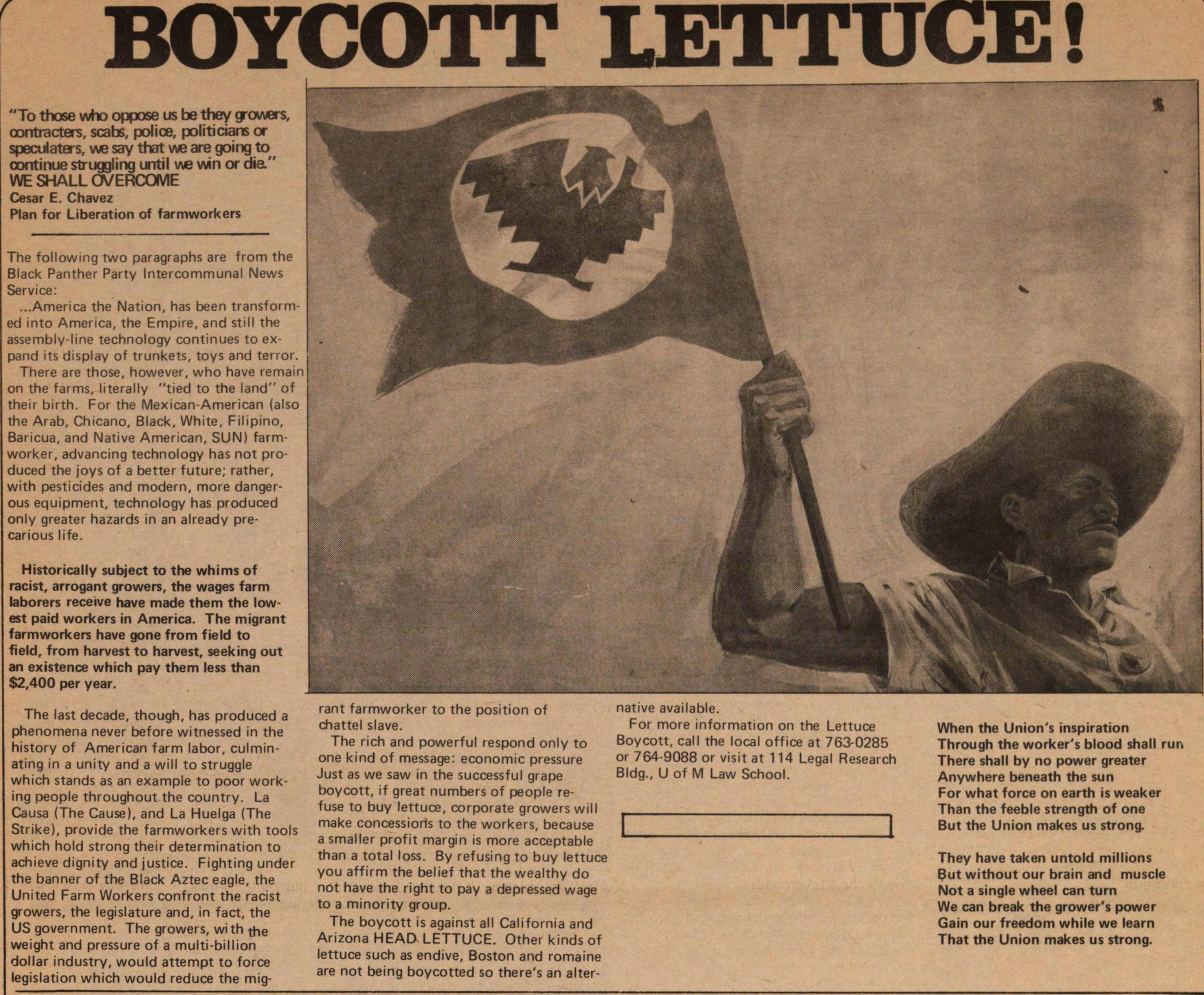 'To those who oppose us be they growers, oontracters, scabs, pólice, politicians or speculaters, we say that we are going to continue struggling until we win or dia" WE SHALL OVERCOME Cesar E. Chavez Plan for Liberation of farmworkers The following two paragraphs are from the Black Panther Party Intercommunal News Service: ...America the Nation, has been transform ed into America, the Empire, and still the assembly-line technology continúes to expand its display of trunkets, toys and terror. There are those, however, who have remai on the farms, literally "tied to the land" of their birth. For the Mexican-American (alsc the Arab, Chicano, Black, White, Filipino, Baricua, and Native American, SUN) farmworker, advancing technology has not produced the joys of a better future; rather, with pesticides and modern, more dangerous equipment, technology has produced only greater hazards in an already precarious life. Historically subject to the whims of racist, arrogant growers, the wages farm laborers receive have made them the lowest paid workers in America. The migrant farmworkers have gone from field to field, from harvest to harvest, seeking out an existence which pay them less than $2,400 per year. The last decade, though, has produced a phenomena never before witnessed in the history of American farm labor, culminating in a unity and a will to struggle which stands as an example to poor working people throughout the country. La Causa (The Cause), and La Huelga (The Strike), provide the farmworkers with tools which hold strong their determination to achieve dignity and justice. Fighting under the banner of the Black Aztec eagle, the United Farm Workers confront the racist growers, the legislature and, in fact, the US govemment. The growers, with the weight and pressure of a multi-billion dollar industry, would attempt to force legislation which would reduce the rant farmworker to the position of chattel slave. The rich and powerful respond only to one kind of message: economie pressure Just as we saw in the successful grape boycott, if great numbers of people refuse to buy lettuce, corporate growers will make concessioris to the workers, because a smaller profit margin is more acceptable than a total loss. By refusing to buy lettuce you affirm the belief that the wealthy do not have the right to pay a depressed wage to a minority group. The boycott is against all California and Arizona HEAD LETTUCE. Other kinds of lettuce such as endive. Boston and romaine are not being boycotted so there's an native available. For more information on the Lettuce Boycott, cali the local office at 763-0285 or 764-9088 or visit at 114 Legal Research Bldg., U of M Law School. When the Union's nspiration Through the worker's blood shall run There shall by no power greater Anywhere beneath the sun For what force on earth is weaker Than the feeble strength of one But the Union makes us strong. They have taken untold millions But without our brain and muscle Not a single wheel can turn We can break the grower's power Gain our freedom while we learn That the Union makes us strong.