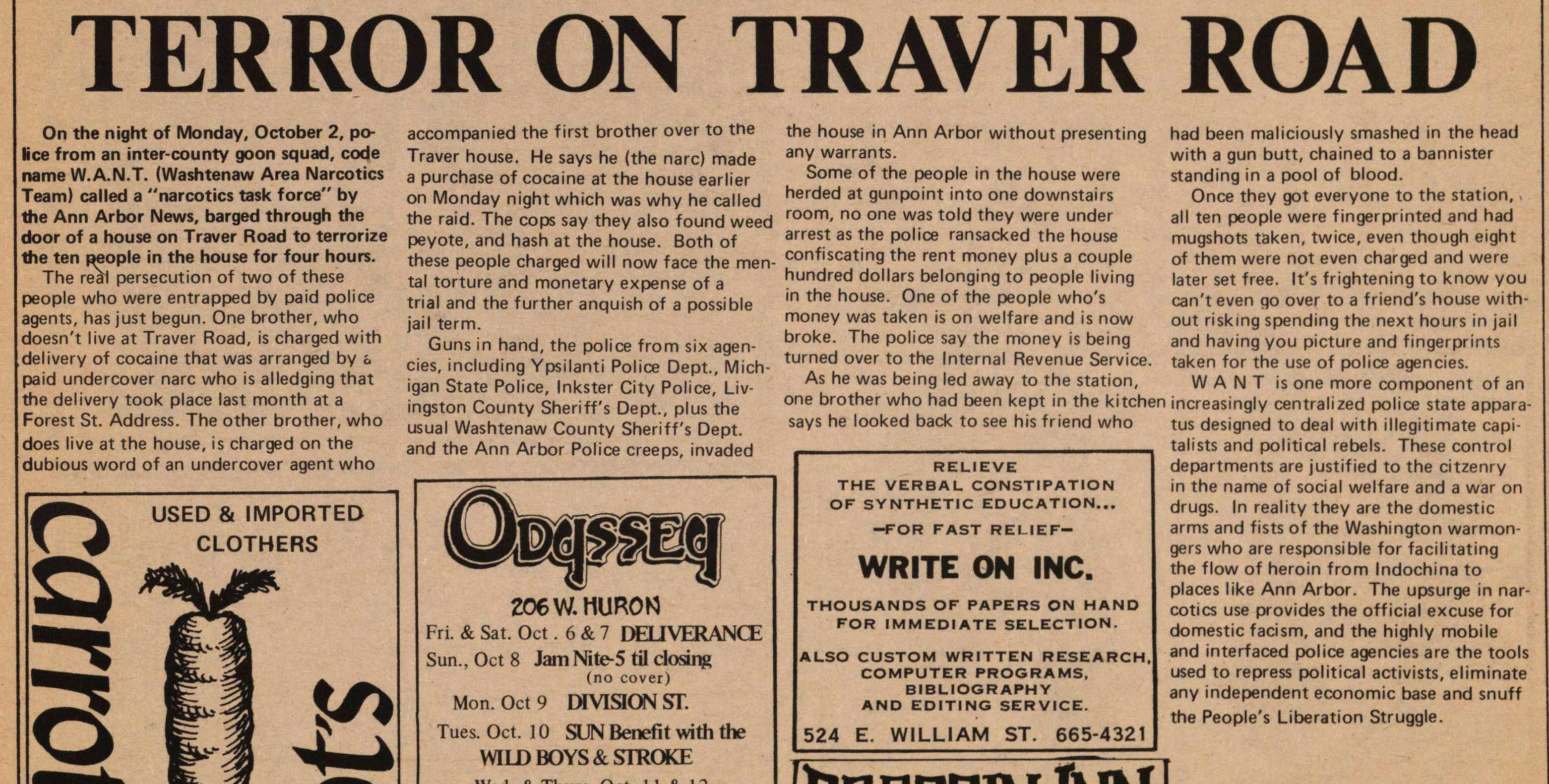 On the night of Monday, October 2, police from an inter-county goon squad, code name W.A.N.T. (Washtenaw Area Narcotics Team) called a "narcotics task force" by the Ann Arbor News, barged through the door of a house on Traver Road to terrorize the ten people in the house for four hours.

The real persecution of two of these people who were entrapped by paid police agents, has just begun. One brother, who doesn't live at Traver Road, is charged with delivery of cocaine that was arranged by a paid undercover narc who is alleging that the delivery took place last month at a Forest St. Address. The other brother, who does live at the house, is charged on the dubious word of an undercover agent who accompanied the first brother over to the Traver house. He says he (the narc) made a purchase of cocaine at the house earlier on Monday night which was why he called the raid. The cops say they also found weed, peyote, and hash at the house. Both of these people charged will now face the mental torture and monetary expense of a trial and the further anguish of a possible jail term.

Some of the people in the house were herded at gunpoint into one downstairs room, no one was told they were under arrest as the police ransacked the house confiscating the rent money plus a couple hundred dollars belonging to people living in the house. One of the people who's money was taken is on welfare and is now broke. The police say the money is being turned over to the Internal Revenue Service.

As he was being led away to the station, one brother who had been kept in the kitchen says he looked back to see his friend who had been maliciously smashed in the head with a gun butt, chained to a bannister standing in a pool of blood.

Once they got everyone to the station, all ten people were fingerprinted and had mugshots taken, twice, even though eight of them were not even charged and were later set free. It's frightening to know you can't even go over to a friend's house without risking spending the next hours in jail and having you picture and fingerprints taken for the use of police agencies.

WANT is one more component of an increasingly centralized police state apparatus designed to deal with illegitimate capitalists and political rebels. These control departments are justified to the citizenry in the name of social welfare and a war on drugs. In reality they are the domestic arms and fists of the Washington warmongers who are responsible for facilitating the flow of heroin from Indochina to places like Ann Arbor. The upsurge in narcotics use provides the official excuse for domestic fascism, and the highly mobile and interfaced police agencies are the tools used to repress political activists, eliminate any independent economic base and snuff the People's Liberation Struggle.