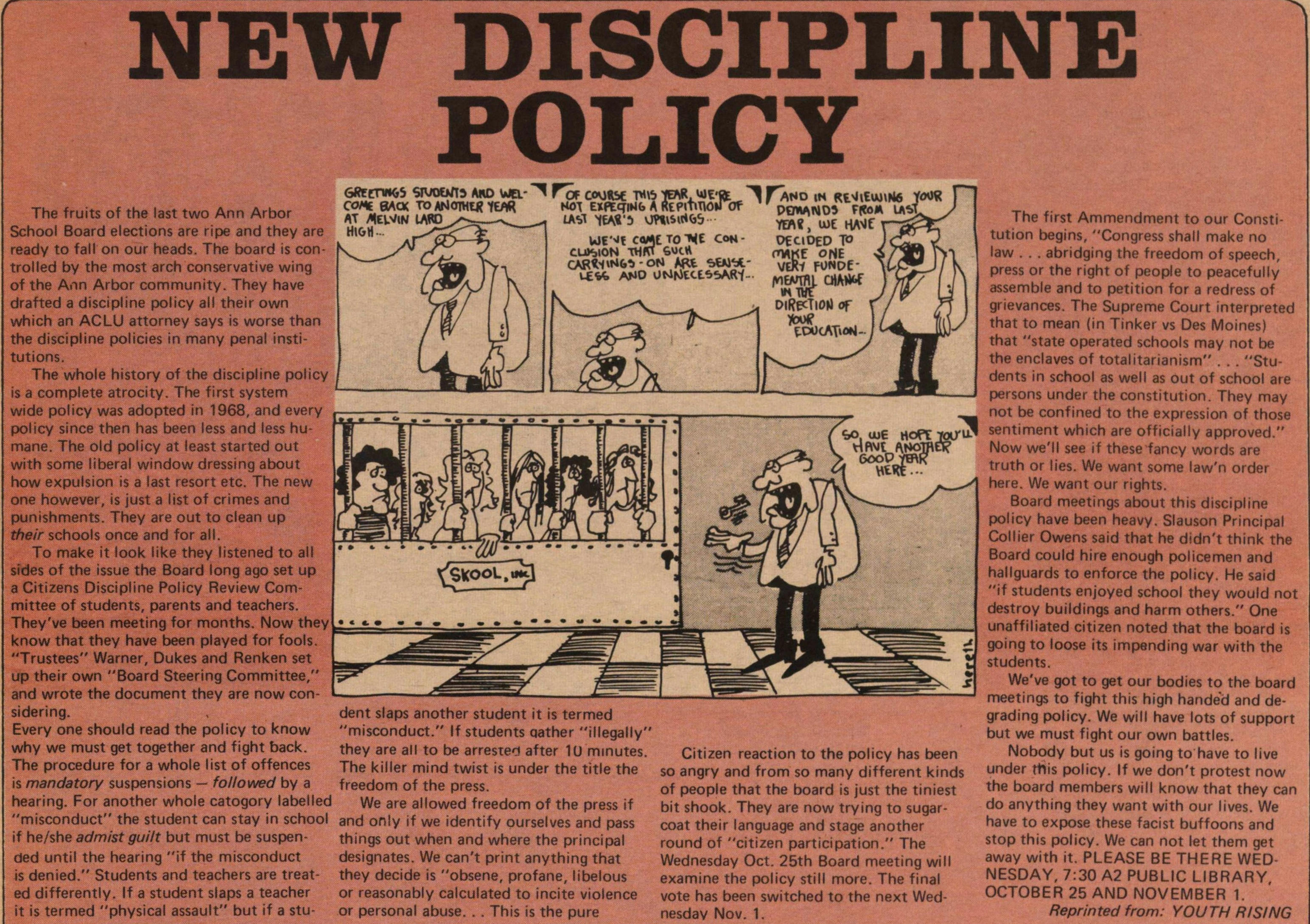 The fruits of the last two Ann Arbor School Board elections are ripe and they are ready to fall on our heads. The board is controlled by the most arch conservative wing of the Ann Arbor community. They have drafted a discipline policy all their own which an ACLU attorney says is worse than the discipline policies in many penal institutions. The whole history of the discipline policy is a complete atrocity. The first system wide policy was adopted in 1968, and every policy since then has been less and less humane. The old policy at least started out with some liberal window dressing about how expulsión is a last resort etc. The new one however, is just a list of crimes and punishments. They are out to clean up their schools once and for all. To make it look like they listened to all sides of the issue the Board long ago set up aCitizens Discipline Policy Review Committee of students, parents and teachers. They've been meeting for months. Now they know that they have been played for fools. "Trustees" Warner, Dukes and Renken set up their own "Board Steering Committee," and wrote the document they are now considering. Every one should read the policy to know why we must get together and fight back. The procedure for a whole list of offences is mandatory suspensions - followed by a hearing. For another whole catogory labelled "misconduct" the student can stay in school if heshe admist guilt but must be suspended until the hearing "if the misconduct is denied." Students and teachers are treated differently. If a student slaps a teacher it is termed "physical assault" but f a dent slaps another student it is termed "misconduct." If students aather "illegally" they are all to be arresten af ter 1U minutes. The killer mind twist is under the title the freedom of the press. We are allowed freedom of the press if and only if we identify ourselves and pass things out when and where the principal designates. We can't print anything that they decide is "obsene, profane, libelous or reasonably calculated to incite viotence or personal abuse. . . This is the pure Citizen reaction to the policy has been so angry and from so many different kinds of people that the board is just the tiniest bit shook. They are now trying to sugarcoat their language and stage another round of "citizen part ici pation." The Wednesday Oct. 25th Board meeting will examine the policy still more. The final vote has been switched to the next Wednesdav Nov. 1. The first Ammendment to our Constitution begins, "Congress shall make no law . . . abridging the freedom of speech, press or the right of people to peacefully assemble and to petition for a redress of grievances. The Supreme Court nterpreted that to mean (n Tinker vs Des Moines) that "state operated schools may not be the enclaves of total itarianism" . . . "Students n school as well as out of school are persons under the constitution. They may not be conf ned to the expression of those sentiment which are officially approved." Now we'll see f these fancy words are truth or lies. We want some law'n order here. We want our rights. Board meetings about this discipline policy have been heavy. Slauson Principal Collier Owens said that he didn't think the Board could hire enough policemen and hallguards to enforce the policy. He said "if students enjoyed school they would not destroy buildings and harm others." One unaffiliated citizen noted that the board is going to loose its impending war with the students. We've got to get our bodies to the board meetings to fight this high handed and degrading policy. We will have lots of support but we must fight our own battles. Nobody but us is going to have to live under tflis policy. If we don't protest now the board members will know that they can do anything they want with our lives. We have to exposé these facist buffoons and stop this policy. We can not let them get away with it. PLEASE BE THERE WEDNESDAY, 7:30 A2 PUBLIC LIBRARY OCTOBER 25 AND NOVEMBER 1. Reprinted f rom: Y0UTH RISING