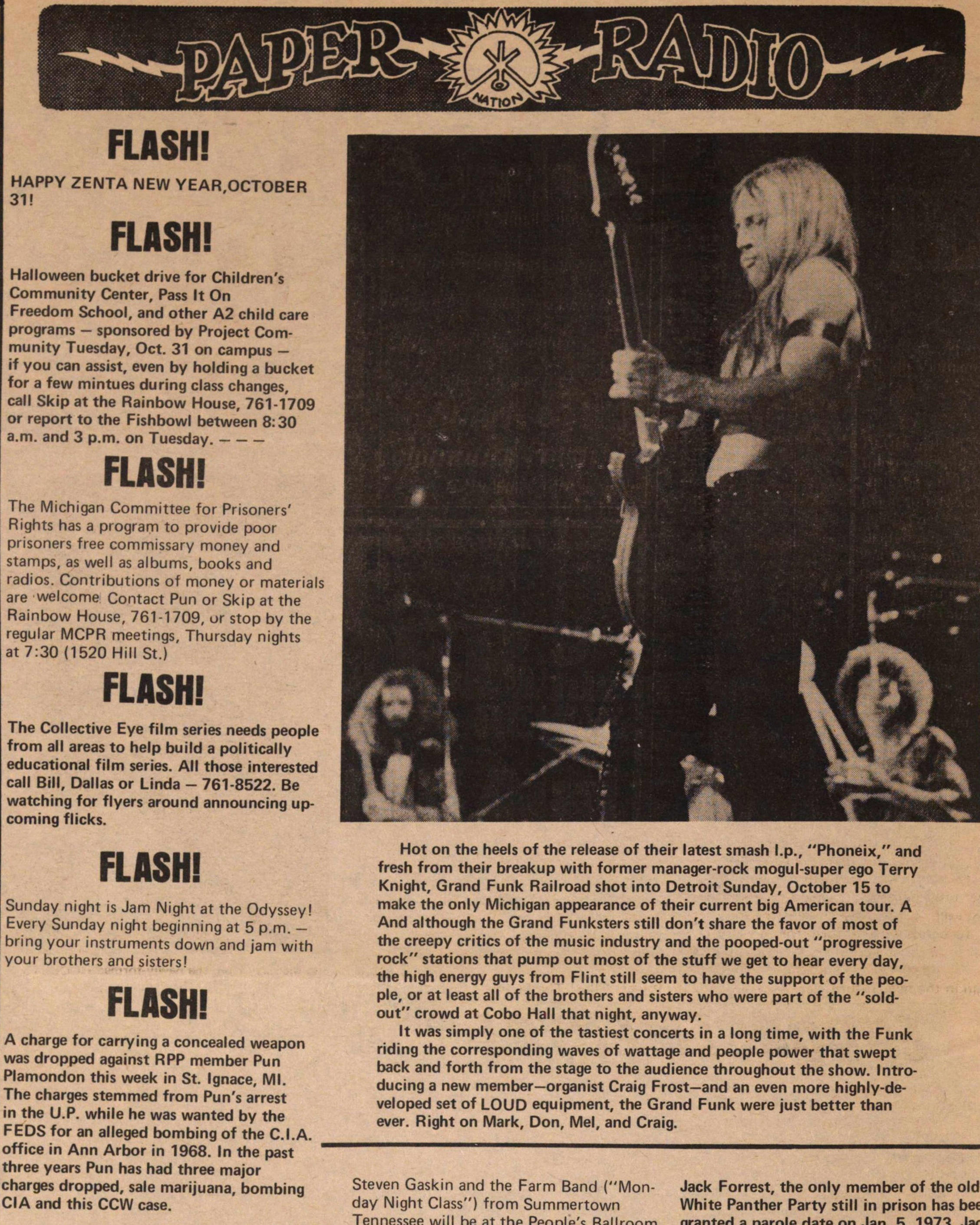 HAPPY ZENTA NEW YEAR OCTOBER 31! FLASH! Halloween bucket drive for Children's Community Center, Pass It On Freedom School, and other A2 child care programs - sponsored by Project Community Tuesday, Oct. 31 on campus - if you can assist, even by holding a bucket for a few mintues during class changes, cali Skip at the Rainbow House, 761-1709 or report to the Fishbowl between 8:30 a.m. and 3 p.m. on Tuesday FLASH! The Michigan Committee for Prisoners' Rights has a program to provide poor prisoners free commissary money and stamps, as well as albums, books and radios. Contributions of money or materials are welcome Contact Pun or Skip at the Rainbow House, 761-1709, or stop by the regular MCPR meetings, Thursday nights at 7:30 (1520 Hill St.) FLASH! The Collective Eye film series needs people from all áreas to help build a politically educational film series. All those interested cali Bill, Dallas or Linda - 761-8522. Be watching for flyers around announcing upcoming flicks. FLASH! Sunday night is Jam Night at the Odyssey! Every Sunday night beginning at 5 p.m. - bring your instruments down and jam with your brothers and sisters! FLASH! A charge for carrying a concealed weapon was dropped against RPP member Pun Plamondon this week in St. Ignace, MI. The charges stemmed from Pun's arrest n the U.P. while he was wanted by the FEDS for an alleged bombing of the Cl. A. office in Ann Arbor in 1968. In the past three years Pun has had three major charges dropped, sale marijuana, bombing CIA and this CCW case. Hot on the heels of the release of their latest smash l.p., "Phonejx," and fresh from their breakup with former manager-rock mogul-super ego Terry Knight, Grand Funk Railroad shot nto Detroit Sunday, October 15 to make the only Michigan appearance of their current big American tour. A And although the Grand Funksters still don't share the favor of most of the creepy critics of the music industry and the pooped-out "progressive rock" stations that pump out most of the stuff we get to hear every day, the high energy guys from Flint still seem to have the support of the people, or at least all of the brothers and sisters who were part of the "soldout" crowd at Cobo Hall that night, anyway. It was simply one of the tastiest concerts in a long time, with the Funk riding the corresponding waves of wattage and people power that swept back and forth from the stage to the audience throughout the show. Introducing a new member- organist Craig Frost- and an even more highly-developed set of LOUD equipment, the Grand Funk were just better than ever. Right on Mark, Don, Mei, and Craig.