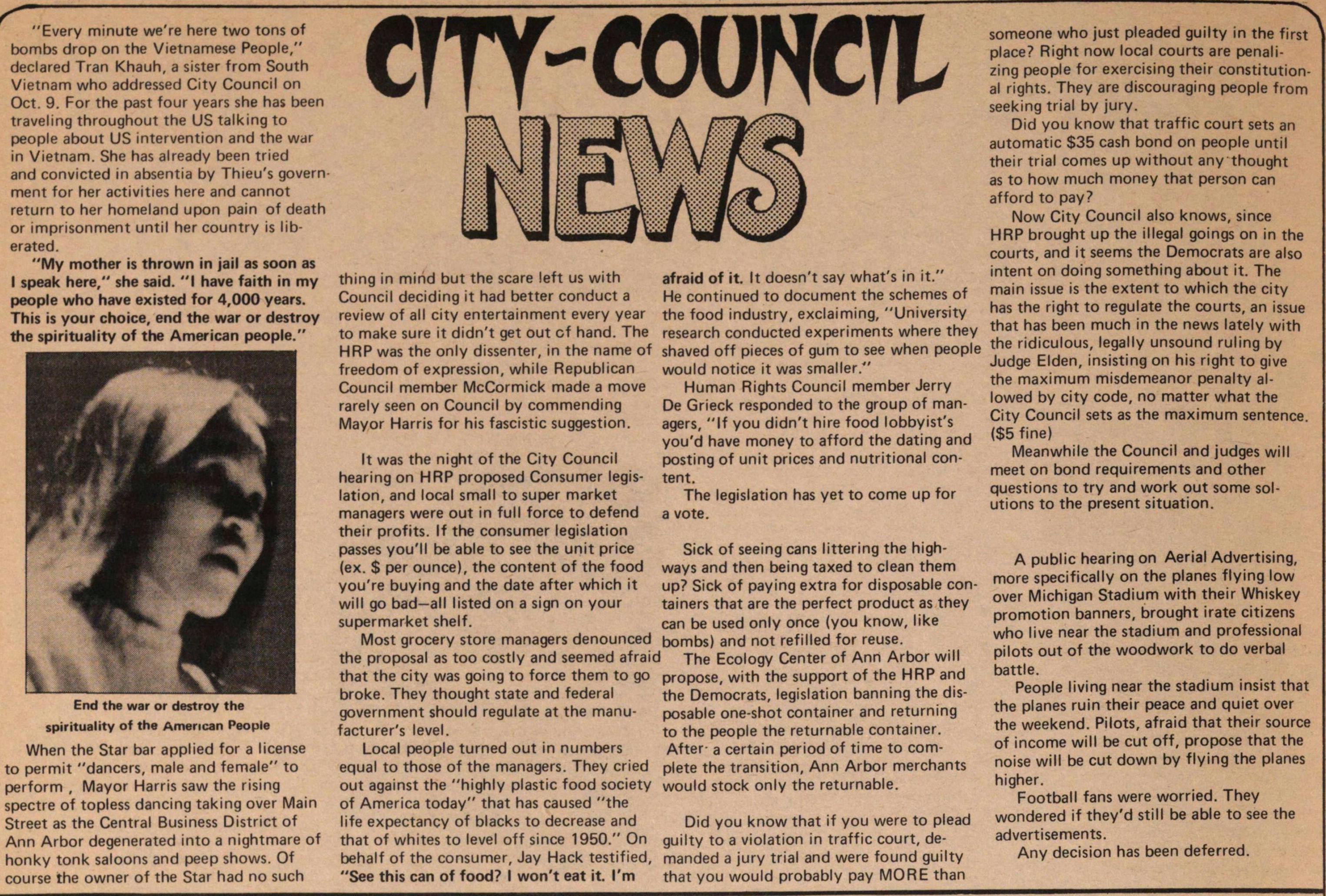 r "Every minute we're here two tons of bombs drop on the Vietnamese People," declared Tran Khauh, a sister from South Vietnam who addressed City Council on Oct. 9. For the past four years she has been traveling throughout the US talking to people about US intervention and the war in Vietnam. She has already been tried and convicted in absentia by Thieu's government for her activities here and cannot return to her homeland upon pain of death or imprisonment until her country is liberated. "My mother is thrown in jail as soon as I speak here," she said. "I have faith in my people who have existed for 4,000 years. This is your choice, end the war or destroy the spirituality of the American people." spirituality of the American People When the Star bar applied for a license to permit "dancers, male and female" to perform , Mayor Harris saw the rising spectre of topless dancing taking over Main Street as the Central Business District of Ann Arbor degenerated into a nightmare of honky tonk saloons and peep shows. Of course the owner of the Star had no such thing in mind but the scare left us with Council deciding t had better conduct a review of all city entertainment every year to make sure it didn't get out cf hand. The HRP was the only dissenter, in the name of freedom of expression, while Republican Council member McCormick made a move rarely seen on Council by commending Mayor Harris for hts fascistic suggestion. It was the night of the City Council hearing on HRP proposed Consumer legislation, and local small to super market managers were out in full force to defend their profits. If the consumer legislation passes you'll be able to see the unit price (ex. $ per ounce), the content of the food you're buying and the date after which it will go bad- all listed on a sign on your supermarket shelf. Most grocery store managers denounced the proposal as too costly and seemed afraid that the city was going to force them to go broke. They thought state and federal government should regúlate at the manufacturer's level. Local people turned out in numbers equal to those of the managers. They cried out against the "highly plastic food society of America today" that has caused "the life expectancy of blacks to decrease and that of whites to level off since 1950." On behalf of the consumer, Jay Hack testified, "See this can of food? I won't eat it. l'm afraid of it. It doesn't say what's n t." He continued to document the schemes of the food industry, exclaiming, "University research conducted experiments where they shaved off pieces of gum to see when people would notice it was smaller." Human Rights Council member Jerry De Grieck responded to the group of managers, "If you didn't hire food lobbyist's you'd have money to afford the dating and posting of unit prices and nutritional content. The legislation has yet to come up for a vote. Sick of seeing cans littering the highways and then being taxed to clean them up? Sick of paying extra for disposable containers that are the perfect product as they can be used only once (you know, like bombs) and not refilled for reuse. The Ecology Center of Ann Arbor will propose, with the support of the HRP and the Democrats, legislation banning the disposable one-shot container and returning to the people the returnable container. a certain period of time to complete the transition, Ann Arbor merchants would stock only the returnable. Did you know that if you were to plead guilty to a violation in traffic court, demanded a jury trial and were found guilty that you would probably pay MORE than someone who just pleaded guilty n the first place? Right now local courts are penalizing people for exercising their constitutional rights. They are discouraging people from seeking trial by jury. Did you know that traffic court sets an automatic $35 cash bond on people until their trial comes up without any thought as to how much money that person can af ford to pay? Now City Council also knows, since HRP brought up the il legal goings on in the courts, and it seems the Democrats are also intent on doing something about t. The main issue is the extent to which the city has the right to regúlate the courts, an issue that has been much in the news lately with the ridiculous, legally unsound ruling by Judge Elden, nsisting on his right to give the maximum misdemeanor penalty allowed by city code, no matter what the City Council sets as the maximum sentence. ($5 fine) Meanwhile the Council and judges will meet on bond requirements and other questions to try and work out some solutions to the present situation. A public hearing on Aerial Advertising, more specifically on the planes flying low over Michigan Stadium with their Whiskey promotion banners, brought rate citizens who live near the stadium and professional pilots out of the woodwork to do verbal battle. People living near the stadium insist that the planes ruin their peace and quiet over the weekend. Pilots, afraid that their source of income will be cut off, propose that the noise will be cut down by flying the planes higher. Football fans were worried. They wondered if they'd still be able to see the advertisements. Any decisión has been deferred.