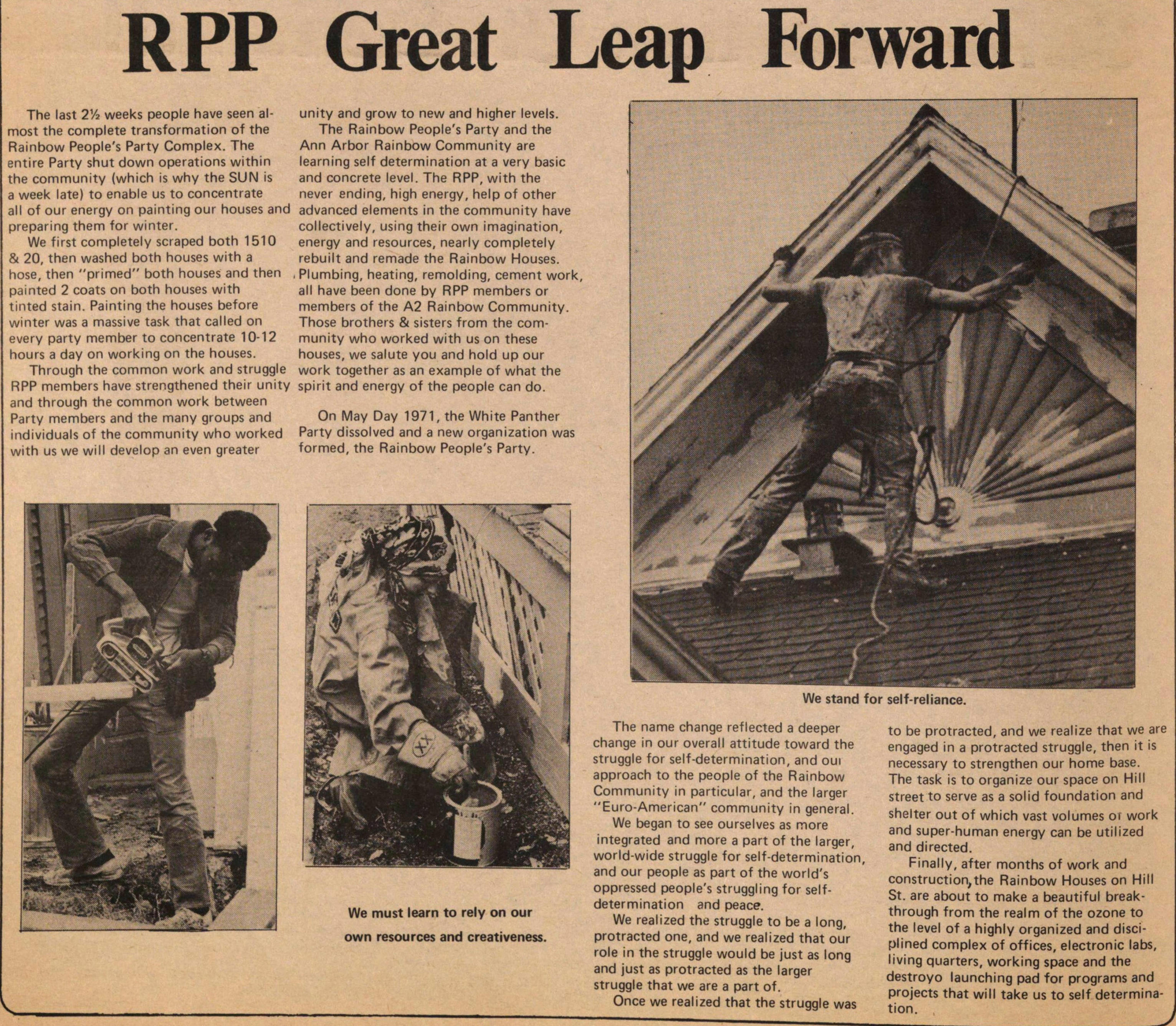 The last 2'2 weeks people have seen almost the complete transformation of the Rainbow People's Party Complex. The entire Party shut down operations within the community (which s why the SUN s a week late) to enable us to concéntrate all of our energy on painting our houses and preparing them for winter. We first completely scraped both 1510 & 20, then washed both houses with a hose, then "primed" both houses and then painted 2 coats on both houses with tinted stain. Painting the houses before winter was a massive task that called on every party member to concéntrate 10-12 hours a day on working on the houses. Through the common work and struggle RPP members have strengthened their unity and through the common work between Party members and the many groups and individuals of the community who worked with us we will develop an even greater unity and grow to new and higher levéis. The Rainbow People's Party and the Ann Arbor Rainbow Community are learning self determinaron at a very basic and concrete level. The RPP, with the never ending, high energy, help of other advanced elements in the community have collectively, using their own imagination, energy and resources, nearly completely rebuilt and remade the Rainbow Houses. Plumbing, heating, remolding, cement work, all have been done by RPP members or members of the A2 Rainbow Community. Those brothers & sisters from the community who worked with us on these houses, we salute you and hold up our work together as an example of what the spirit and energy of the people can do. On May Day 1971, the White Panther Party dissolved and a new organization was formed, the Rainbow People's Party. The name change reflected a deeper change n our overall attitude toward the struggle for self-determination, and oui approach to the people of the Rainbow Community in particular, and the larger "Euro-American" community in general. We began to see ourselves as more ntegrated and more a part of the larger, world-wide struggle for self-determination, and our people as part of the world's oppressed people's struggling for selfdetermination and peace. We realized the struggle to be a long, protracted one, and we realized that our role in the struggle would be just as long and just as protracted as the larger struggle that we are a part of. Once we realized that the struggle was to be protracted, and we realize that we are engaged n a protracted struggle, then t is necessary to strengthen our home base. The task is to organize our space on Hill street to serve as a solid foundation and shelter out of which vast volumes or work and super-human energy can be utilized and directed. Finally, after months of work and construction, the Rainbow Houses on Hill St. are about to make a beautiful breakthrough f rom the realm of the ozone to the level of a highly organized and disciplined complex of offices, electronic labs, living quarters, working space and the destroyo launching pad for programs and projects that will take us to self determination. _J