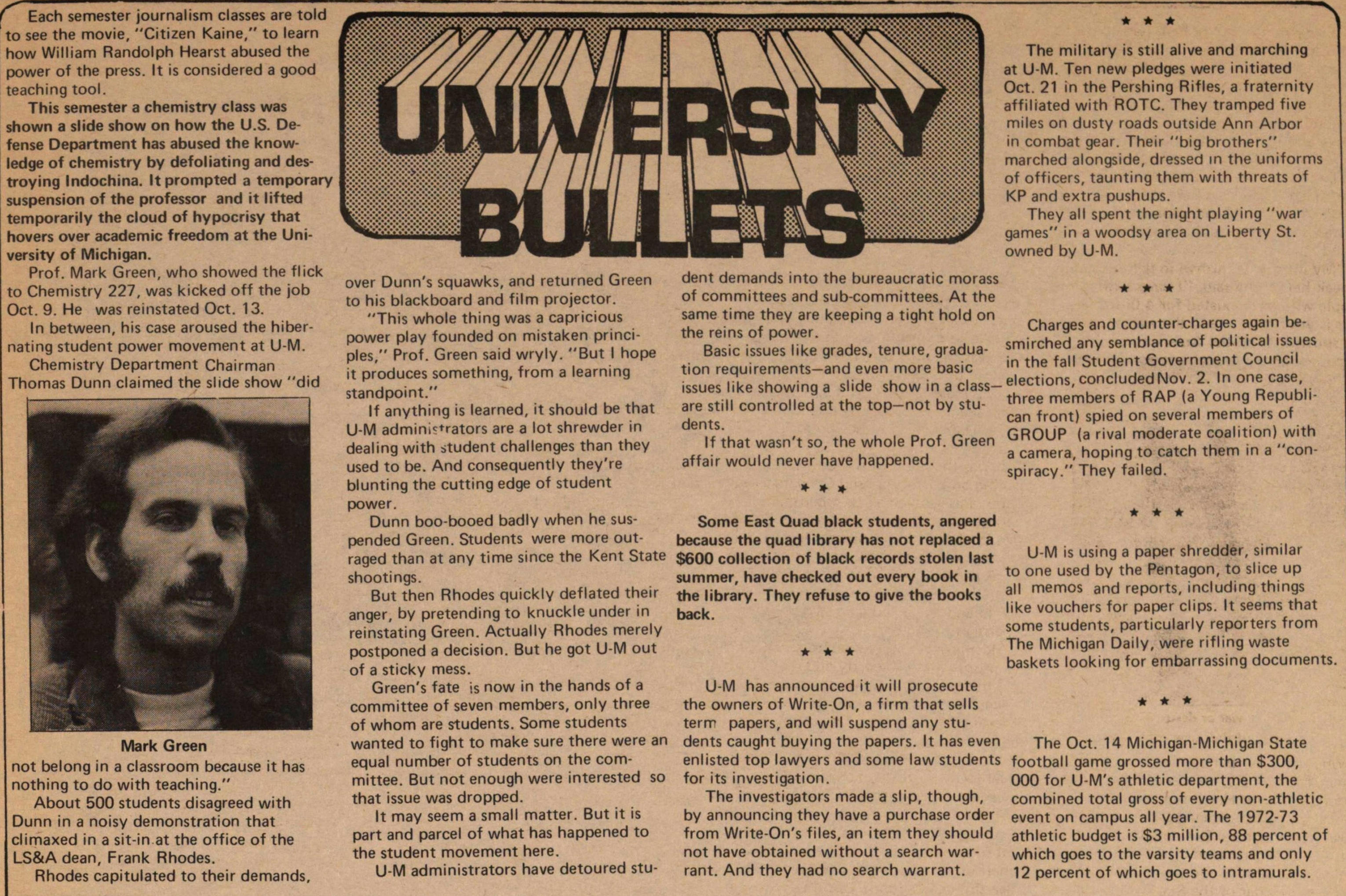 Each semester journalism classes are told to see the movie, "Citizen Kaine," to learn how William Randolph Hearst abused the power of the press. It is considered a good teaching tooi. This semester a chemistry class was shown a slide show on how the U.S. Defense Department has abused the knowledge of chemistry by defoliating and destroying Indochina. Itprompted a temporary suspension of the professor and it lifted temporarily the cloud of hypocrisy that hovers over academie freedom at the University of Michigan. Prof. Mark Green, who showed the f lick to Chemistry 227, was kicked off the job Oct. 9. He was reinstated Oct. 13. In between, his case aroused the hibernating student power movement at U-M. Chemistry Department Chairman Thomas Dunn claimed the shde show "did not belong in a classroom because t has nothing to do with teaching." About 500 students disagreed with Dunn in a noisy demonstration that climaxed in a sit-in at the office of the LS&A dean, Frank Rhodes. Rhodes capitulated to their demands. over Dunn's squawks, and returned Green to his blackboard and film projector. "This whole thing was a capricious power play founded on mistaken principies," Prof. Green said wryly. "But I hope it produces something, from a learning standpoint." If anything is learned, it should be that U-M adminitrators are a lot shrewder in dealing with student challenges than they used to be. And consequently they're blunting the cutting edge of student power. Dunn boo-booed badly when he suspended Green. Students were more raged than at any time since the Kent State shootings. i But then Rhodes quickly deflated their anger, by pretending to knuckle under in reinstating Green. Actually Rhodes merely postponed a decisión. But he got U-M out of a sticky mess. Green's fate is now in the hands of a committee of seven members, only three of whom are students. Some students wanted to fight to make sure there were an equal number of students on the committee. But not enough were interested so that issue was dropped. It may seem a small matter. But t is part and parcel of what has happened to the student movement here. U-M administrators have detoured dent demands nto the bureaucratie morass of committees and sub-committees. At the same time they are keeping a tight hold on the reins of power. Basic issues like grades, tenure, graduation requirements- and even more basic issues like showing a slide show in a class- are still controlled at the top-not by students. If that wasn't so, the whole Prof. Green affair would never have happened. Some East Quad black students, angered because the quad library has not replaced a S600 collection of black records stolen last summer, have checked out every book n the library. They refuse to give the books back. U-M has announced it will prosecute the owners of Write-On, a firm that sells terrr papers, and witl suspend any students caught buying the papers. It has even enlisted top lawyers and some law students for its investigation. The investigators made a slip, though, by announcing they have a purchase order from Write-On's files, an item they should not have obtained without a search warrant. And they had no search warrant. The military is still alive and marching at U-M. Ten new pledges were initiated Oct. 21 in the Pershing Rifles, a fraternity affiliated with ROTC. They tramped five miles on dusty roads outside Ann Arbor in combat gear. Their "big brothers" marched alongside, dressed in the uniforms of officers, taunting them with threats of KP and extra pushups. They all spent the night playing "war games" in a woodsy area on Liberty St. owned by U-M. # Charges and counter-charges again besmirched any semblance of political issues in the fall Student Government Council elections, concludedNov. 2. In one case, three members of RAP (a Young Republican front) spied on several members of GROUP (a rival moderate coalition) with a camera, hoping to catch them in a "conspiracy." They failed. U-M is using a paper shredder, similar to one used by the Pentagon, to slice up all memos and reports, including things like vouchers for paper clips. It seems that some students, particularly reporters from The Michigan Daily, were rifling waste baskets looking for embarrassing documents. The Oct. 14 Michigan-Michigan State football game grossed more than $300, 000 for U-M's athletic department, the combined total gross of every non-athletic event on campus all year. The 1972-73 athletic budget is $3 mili ion, 88 percent of which goes to the varsity teams and only 12 percent of which goes to intramurals.