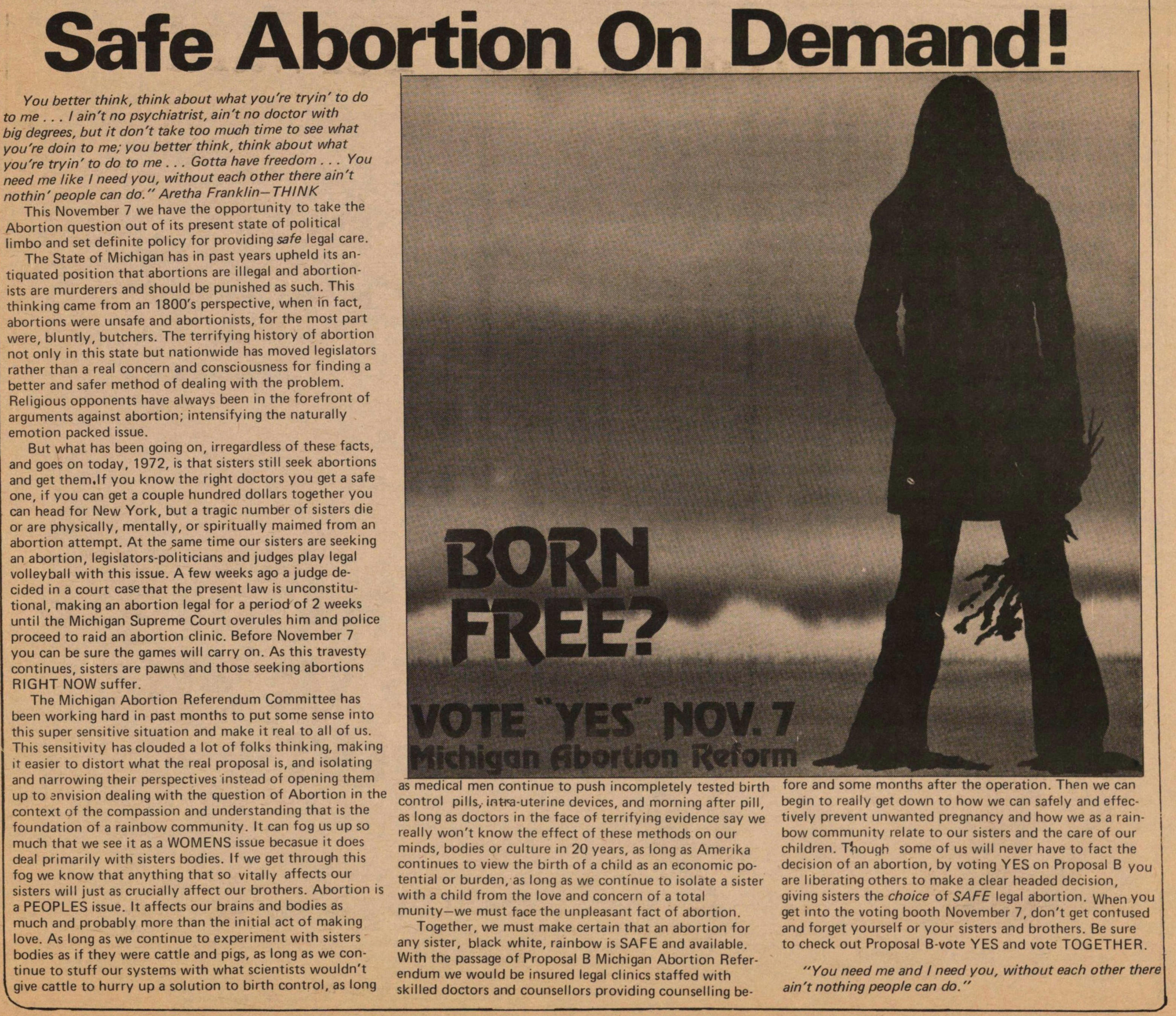 You better think, think about what you're tryin' to do to me . . . I ain't no psychiatrist, ain't no doctor with big degrees, but it don't take too much time to see what you're doin to me; you better think, think about what you're tryin' to do to me . . . Gotta have freedom . . . You need me like I need you, without each other there ain't nothin' people can do. " Aretha THINK This November 7 we have the opportunity to take the Abortion question out of ts present state of political limbo and set definite policy for providing safe legal care. The State of Michigan has in past years upheld its antiquated position that abortions are Ilegal and abortionsts are murderers and should be punished as such. This thinking carne from an 1800's perspective, when in fact, abortions were unsafe and abortionists, for the most part were, bluntly, butchers. The terrifying history of abortion not only in this state but nationwide has moved legislators rather than a real concern and consciousness for finding a better and safer method of dealing with the problem. Religious opponents have always been in the forefront of arguments against abortion; intensifying the naturally emotion packed issue. But what has been going on, rregardless of these facts, and goes on today, 1972, is that sisters still seek abortions and get them.lf you know the right doctors you get a safe one, if you can get a couple hundred dollars together you can head for New York, but a tragic number of sisters die or are physically, mentally, or spiritually maimed from an abortion attempt. At the same time our sisters are seeking an abortion, legislators-politicians and judges play legal volleyball with this issue. A few weeks ago a judge decided in a court case that the present law is unconstitutional, making an abortion legal for a period of 2 weeks until the Michigan Supreme Court overules him and pólice proceed to raid an abortion clinic. Before November 7 you can be sure the games will carry on. As this travesty continúes, sisters are pawns and those seeking abortions RIGHT NOW suffer. The Michigan Abortion Referendum Committee has been working hard in past months to put some sense into this super sensitive situation and make it real to all of us. This sensitivity has clouded a lot of folks thinking, making it easier to distort what the real proposal is, and isolating and narrowing their perspectives instead of opening them up to anvision dealing with the question of Abortion in the context of the compassion and understanding that is the foundation of a rainbow community. It can fog us up so much that we see t as a WOMENS issue becasue it does deal primarily with sisters bodies. If we get through this fog we know that anything that so vita) I y affects our sisters will just as crucially affect our brothers. Abortion is a PEOPLES issue. It affects our brains and bodies as much and probably more than the initial act of making love. As long as we continue to experiment with sisters bodies as if they were cattle and pigs, as long as we continue to stuff our systems with what scientists wouldn't give cattle to hurry up a solution to birth control, as long as medical men continue to push ncompletely tested birth control pills, intfa-uterine devices, and morning after pill, as long as doctors in the face of terrifying evidence say we really won't know the effect of these methods on our minds, bodies or culture in 20 years, as long as Amerika continúes to view the birth of a child as an economie potential or burden, as long as we continue to isolate a sister with a child from the love and concern of a total munity- we must face the unpleasant fact of abortion. Together, we must make certain that an abortion for any sister, black white, rainbow is SAFE and available. With the passage of Proposal B Michigan Abortion Referendum we would be insured legal clinics staffed with skilled doctors and counsellors providing counselling fore and some months after the operation. Then we can begin to really get down to how we can safely and effectively prevent unwanted pregnancy and how we as a rainbow community relate to our sisters and the care of our children. Tliouqh some of us will never have to fact the decisión of an abortion, by voting YES on Proposal B you are liberating others to make a clear headed decisión, giving sisters the choice of SAFE legal abortion. When You get into the voting booth November 7, don't get contused and forget yourself or your sisters and brothers. Be sure to check out Proposal B-vote YES and vote TOG ETHER. "You need me and I need you, without each other there ain't nothing people can do. "