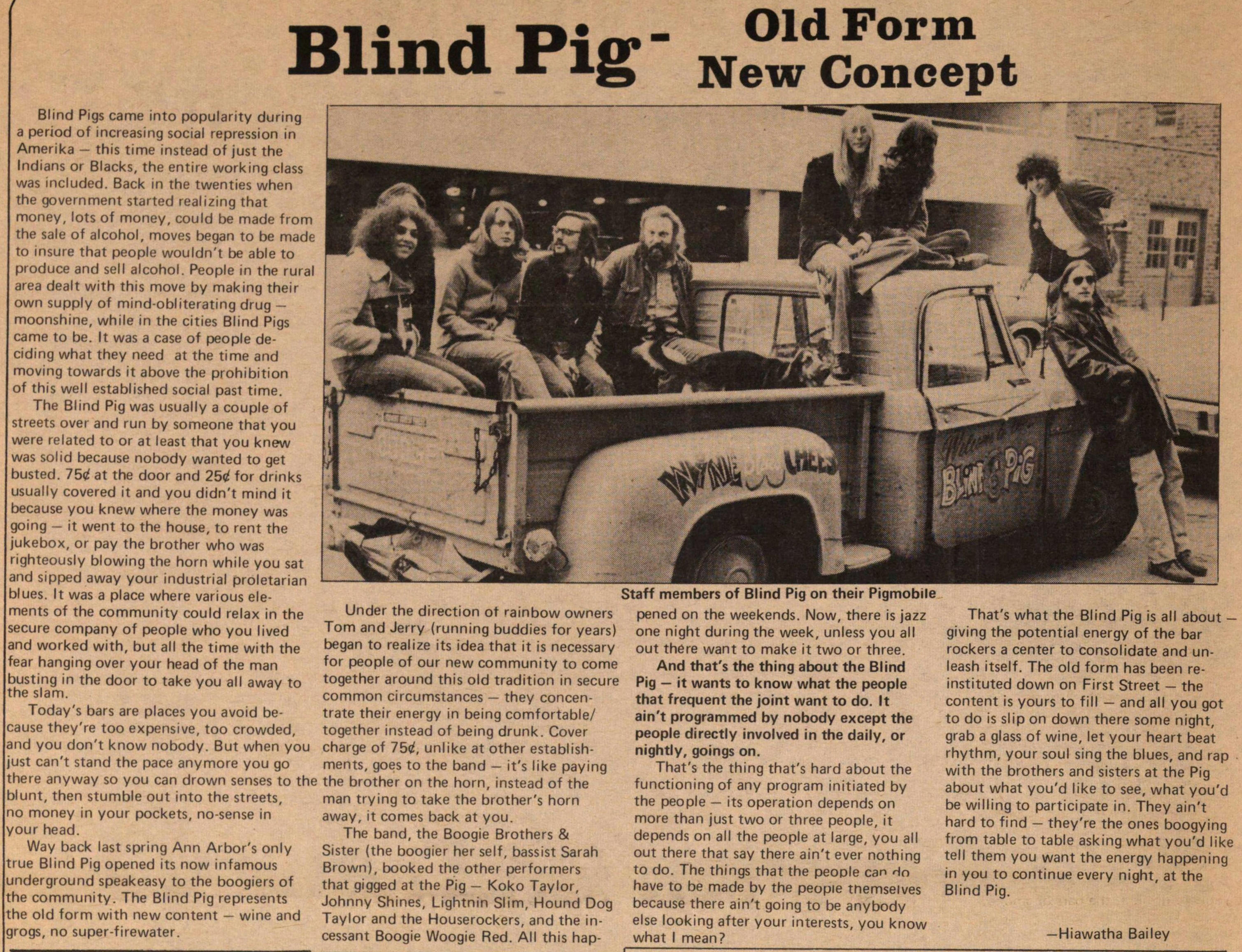 Blind Pigs carne into popularity during a period of increasing social repression in Amerika - this time instead of just the Indians or Blacks, the entire working class was included. Back in the twenties when the government started realizing that money, lots of money, could be made from the sale of alcohol, moves began to be made to insure that people wouldn't be able to produce and sell alcohol. People in the rural área dealt with this move by making their own supply of mind-obliterating drug - moonshine, while in the cities Blind Pigs came to be. It was a case of people deciding what they need at the time and moving towards it above the prohibition of this well established social past time. The Blind Pig was usually a couple of streets over and run by someone that you were related to or at least that you knew was solid because nobody wanted to get busted. 75tf at the door and 25 for drinks usually covered it and you didn't mind it because you knew where the money was going - it went to the house, to rent the jukebox, or pay the brother who was righteously blowing the horn while you sat and sipped away your industrial proletarian blues. It was a place where various elements of the community could relax in the secure company of people who you lived and worked with, but all the time with the fear hanging over your head of the man busting in the door to take you all awav to the slam. Today's bars are places you avoid because they're too expensive, too crowded, and you don't know nobody. But when you just can't stand the pace anymore you go there anyway so you can drown senses to the blunt, then stumble out into the streets, no money in your pockets, no-sense in your head. Way back last spring Ann Arbor's only true Blind Pig opened its now infamous underground speakeasy to the boogiers of the community. The Blind Pig represents the old form with new content - wine and grogs, no super-firewater. Under the direction ot rainbow owners Torn and Jerry (running buddies for years) began to realize its dea that it is necessary for people of our new community to come together around this old tradition n secure common clrcumstances - they concéntrate their energy n being comfortable together nstead of being drunk. Cover charge of 75, unlike at other establishments, goes to the band - it's like paying the brother on the horn, instead of the man trying to take the brother's horn away, it comes back at you. The band, the Boogie Brothers & Sister (the boogier her self, bassist Sarah Brown), booked the other performers that gigged at the Pig - Koko Taylor, Johnny Shines, Lightnin Slim, Hound Dog Taylor and the Houserockers, and the incessant Boogie Woogie Red. All this pened on the weekends. Now, there is jazz one night during the week, unless you all out there want to make it two or three. And that's the thing about the Blind Pig - it wants to know what the people that frequent the joint want to do. It ain't programmed by nobody except the people directly involved in the daily, or nightly, goings on. That's the thing that's hard about the functioning of any program initiated by the people - its operation depends on more than just two or three people, it depends on all the people at large, you all out there that say there ain't ever nothing to do. The things that the people can Ho have to be made by the peopie tnemseives because there ain't going to be anybody else looking after your interests, you know what I mean? That's what the Blind Pig is all about - giving the potential energy of the bar rockers a center to consolídate and unleash itself. The oíd form has been renstituted down on First Street - the content is yours to fill - and all you got to do is slip on down there some night, grab a glass of wine, let your heart beat rhythm, your soul sing the blues, and rap with the brothers and sisters at the Pig about what you'd like to see, what you'd be willing to particípate in. They ain't hard to find - they're the ones boogying from table to table asking what you'd like teil them you want the energy happening in you to continue every night, at the Blind Pig.