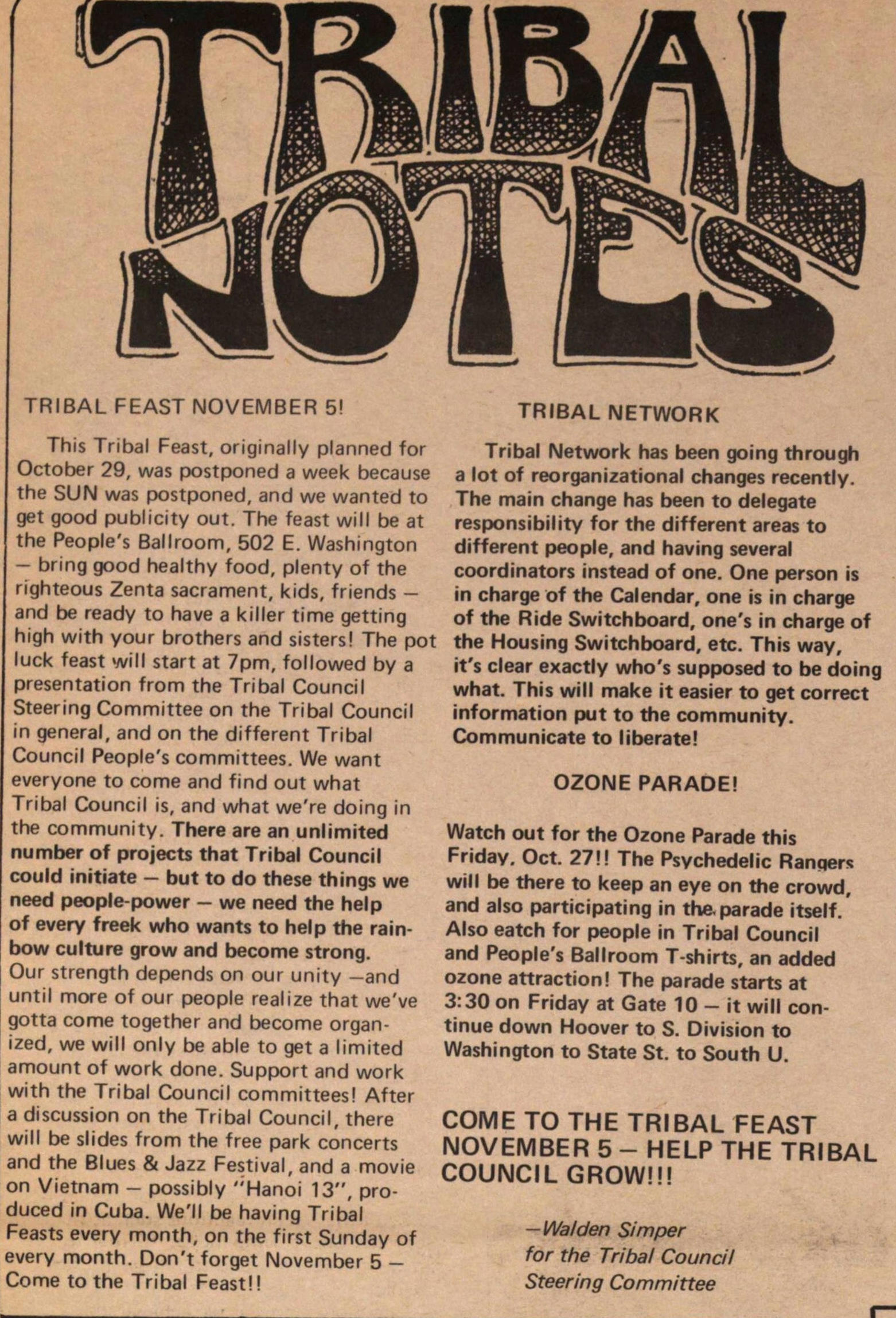 This Tribal Feast, originally planned for October 29, was postponed a week because the SUN was postponed, and we wanted to get good publicity out. The feast will be at the People's Ballroom, 502 E. Washington - bring good healthy food, plenty of the righteous Zenta sacrament, kids, friends - and be ready to have a killer time getting high with your brothers and sisters! The pot luck feast will start at 7pm, followed by a presentation f rom the Tribal Council Steering Committee on the Tribal Council in general, and on the different Tribal Council People's committees. We want everyone to come and find out what Tribal Council is, and what we're doing in the community. There are an unlimited number of projects that Tribal Council could initiate - but to do these things we need people power - we need the help of every f reek who wants to help the rainbow culture grow and become strong. Our strength depends on our unity -and until more of our people realize that we've gotta come together and become organized, we will only be able to get a limited amount of work done. Support and work with the Tribal Council committees! After a discussion on the Tribal Council, there will be slides from the free park concerts and the Blues & Jazz Festival, and a movie on Vietnam - possibly "Hanoi 13", produced in Cuba. We'll be having Tribal Feasts every month, on the first Sunday of every month. Don't forget November 5 - Come to the Tribal Feast!! TRIBAL NETWORK Tribal Network has been going through a lot of reorganizational changes recently. The main change has been to delégate respons i bil i ty for the different áreas to different people, and having several coördinators instead of one. One person is in charge of the Calendar, one is in charge of the Ride Switchboard, one's in charge of the Housing Switchboard, etc. This way, it's clear exactly who's supposed to be doing what. This will make it easier to get correct information put to the community. Communicate to libérate! OZONE PARADE! Watch out for the Ozone Parade this Friday. Oct. 27!! The Psychedelic Ranqers will be there to keep an eye on the crowd, and also participating in the parade itself. Also eatch for people in Tribal Council and People's Ballroom T-shirts, an added ozone attraction! The parade starts at 3:30 on Friday at Gate 10 - it will continue down Hoover to S. División to Washington to State St. to South U. COME TO THE TRIBAL FEAST NOVEMBER 5 - HELP THE TRIBAL COUNCIL GROWÜ! for the Tribal Council Steering Committee