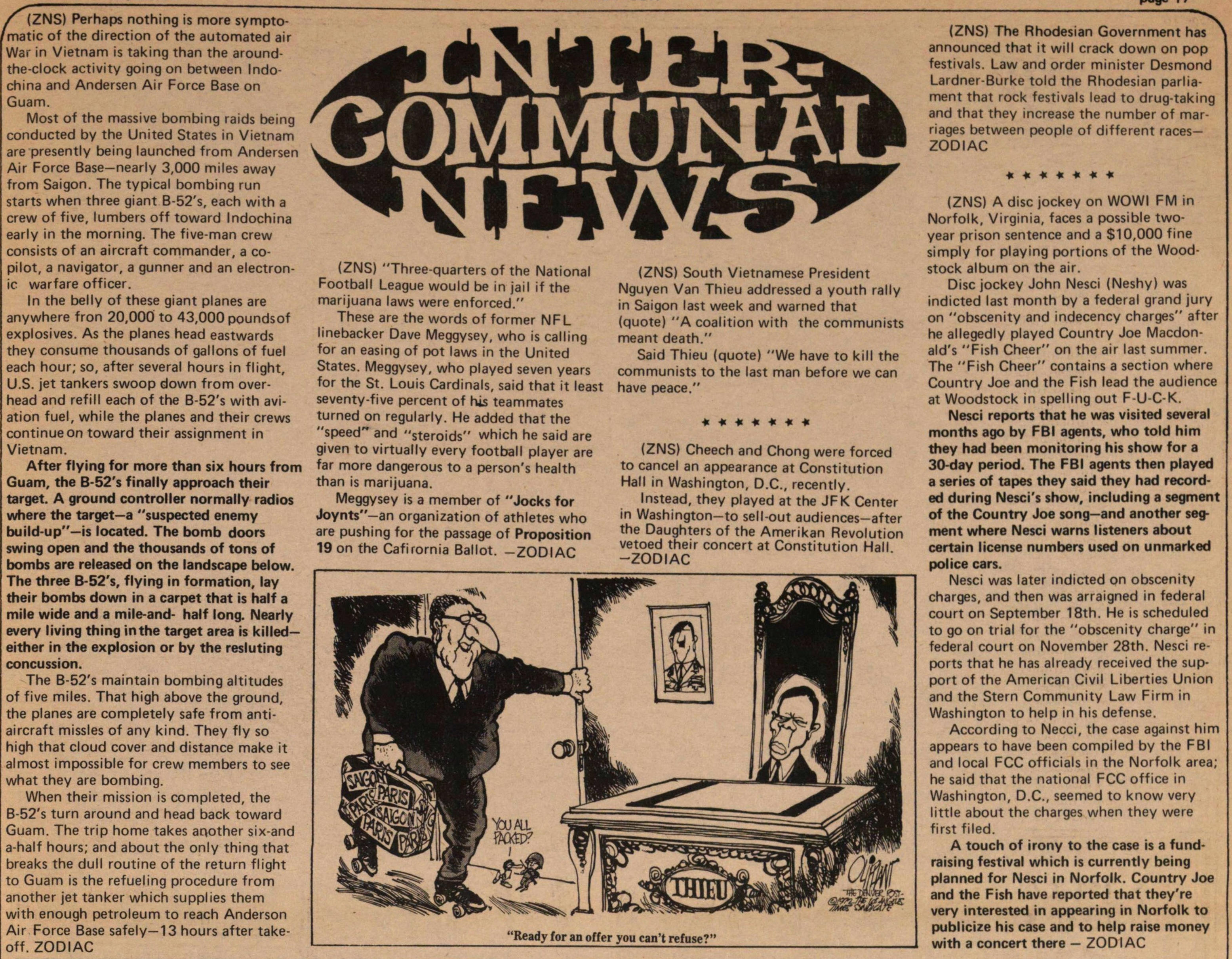 (ZNS) Perhaps nothing is more symptomatic of the direction of the automated air War in Vietnam is taking than the aroundthe-clock activity going on between Indochina and Andersen Air Force Base on Guam. Most of the massive bombing raids being conducted by the United States in Vietnam are presently being launched from Andersen Air Force Base- nearly 3,000 miles away from Saigon. The typical bombing run starts when three giant B-52's, each with a crew of five, lumbers off toward Indochina early in the morning. The five-man crew consists of an aircraft commander, a copilot, a navigator, a gunner and an electronic warfare officer. In the belly of these giant planes are anywhere fron 20,000 to 43,000 poundsof explosives. As the planes head eastwards they consume thousands of gallons of fuel each hour; so, after several hours in flight, U.S. jet tankers swoop down from overhead and ref II each of the B-52's with aviation fuel, while the planes and their crews continue on toward their assignment in Vietnam. After flying for more than six hours from Guam, the B-52's f inally approach their target. A ground controller normally radios where the target- a "suspected enemy build-up"-is located. The bomb doors swing open and the thousands of tons of bombs are released on the landscape below. The three B-52's, flying in formation, lay their bombs down in a carpet that is half a mile wide and a half long. Nearly every living thing in the target area is killed- either in the explosión or by the resluting concussion. The B-52's maintain bombing altitudes of five miles. That high above the ground, the planes are completely safe from antiaircraft missies of any kind. They fly so high that cloud cover and distance make it almost impossible for crew members to see what they are bombing. When their mission is completed, the B-52's turn around and head back toward Guam. The trip home takes aoother six-and a-half hours; and about the only thing that breaks the dull routine of the return flight to Guam is the refueling procedure from another jet tanker which supplies them with enough petroleum to reach Anderson Air Force Base safely-13 hours after takeoff. ZODIAC (ZNS) "Three-quarters of the National Football League would be n jat I if the marijuana laws were enforced." These are the words of former NFL linebacker Dave Meggysey, who is calling for an easing of pot laws n the United States. Meggysey, who played seven years for the St. Louis Cardinals, said that it least seventy-five percent of nis teammates turned on regularly. He added that the "speed" and "steroids" which he said are given to virtually every football player are i far more dangerous to a person's health than is marijuana. Meggysey is a member of "Jocks for Joynts"-an organization of athletes who are pushing for the passage of Proposition 19 on the Cafirornia Ballot. - ZODIAC (ZNS) South Vietnamese President Nguyen Van Thieu addressed a youth rally in Saigon last week and warned that (quote) "A coalition with the communists meant death." Said Thieu (quote) "We have to kill the communists to the last man before we can have peace." (ZNS) Cheech and Chong were forced to cancel an appearance at Constitution Hall in Washington, D.C., recently. Instead, they played at the JFK Center in Washington-to sell-out audiences-after the Daughters of the Amerikan Revolution vetoed their concert at Constitution Hall -ZODIAC (ZNS) The Rhodesian Government has ' announced that it will crack down on pop festivals. Law and order minister Desmond Lardner-Burke told the Rhodesian parliament that rock festivals lead to drug-taking and that they increase the number of marriages between people of different races- ZODIAC (ZNS) A disc jockey on WOWI FM in Norfolk, Virginia, faces a possible twoyear prison sentence and a $10,000 fine simply for playing portions of the Woodstock album on the air. Disc jockey John Nesci (Neshy) was indicted last month by a federal grand jury on "obscenity and ndecency charges" after he allegedly played Country Joe Macdonald's "Fish Cheer" on the air last summer. The "Fish Cheer" contains a section where Country Joe and the Fish lead the audience at Woodstock in spelling out F-U-C-K. Nesci reports that he was visited several months ago by FBI agents, who told him they had been monitoring his show for a 30-day period. The FBI agents then played a series of tapes they said they had record ed during Nesci's show, including a segment of the Country Joe song- and another segment where Nesci warns listeners about certain license numbers used on unmarked pólice cars. Nesci was later indicted on obscenity charges, and then was arraigned in federal court on September 18th. He is scheduled to go on trial for the "obscenity charge" in federal court on November 28th. Nesci reports that he has already received the support of the American Civil Liberties Union and the Stern Community Law Firm in Washington to help in his defense. According to Necci, the case against him appears to have been compiled by the FBI and local FCC officials in the Norfolk area; he said that the national FCC office in Washington, D.C., seemed to know very little about the charges when they were first filed. A touch of irony to the case is a fundraising festival which is currently being planned for Nesci in Norfolk. Country Joe and the Fish have reported that they're very interested in appearing in Norfolk to publicize his case and to help raise money with a concert there