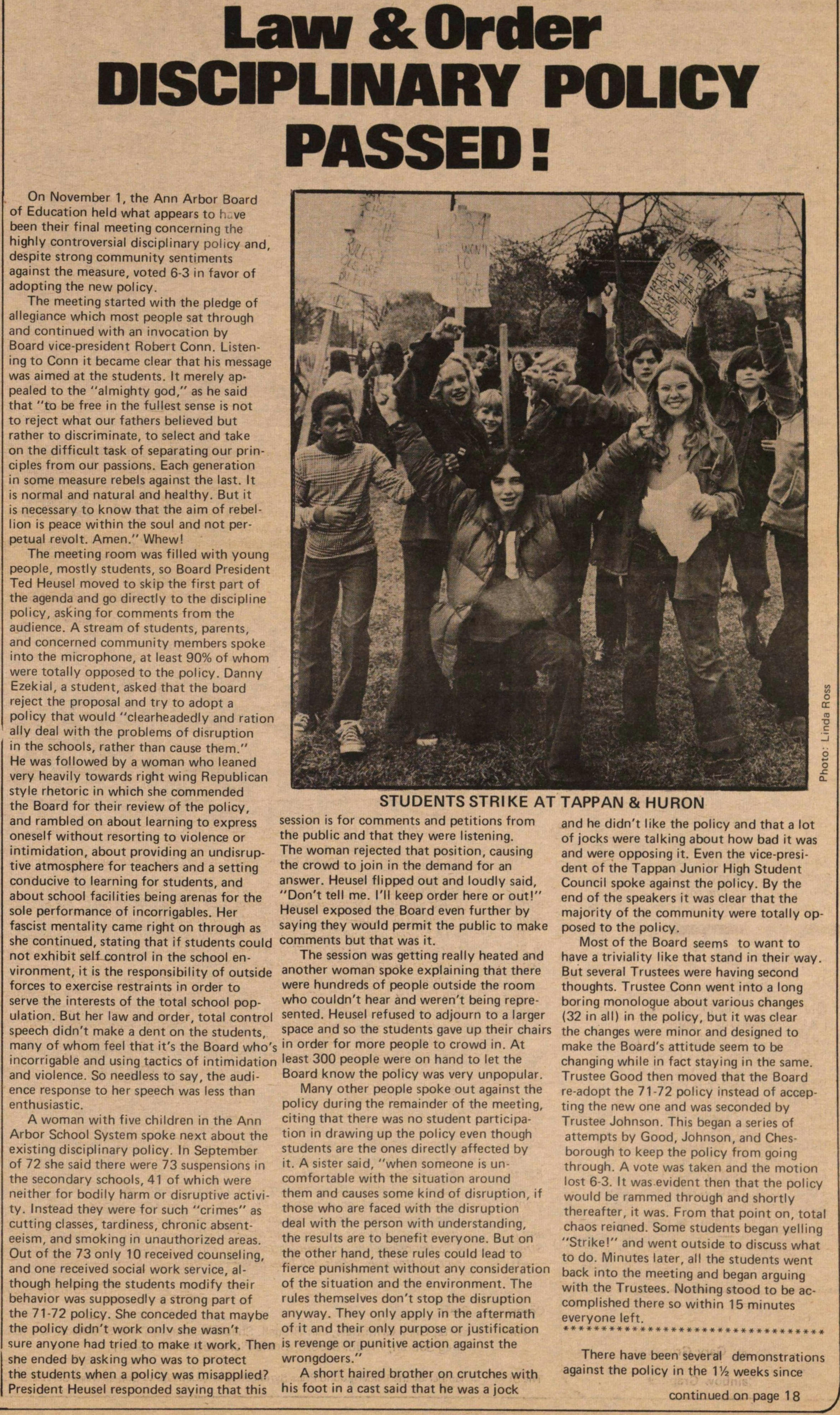 On November 1, the Ann Arbor Board of Education held what appears to have been their final meeting concerning the highly controversial disciplinary policy and, despite strong community sentiments against the measure, voted 6-3 in favor of adopting the new policy.

The meeting started with the pledge of allegiance which most people sat through and continued with an invocation by Board vice-president Robert Conn. Listening to Conn it became clear that his message was aimed at the students. It merely appealed to the "almighty god," as he said that "to be free in the fullest sense is not to reject what our fathers believed but rather to discriminate, to select and take on the difficult task of separating our principles from our passions. Each generation in some measure rebels against the last. It is normal and natural and healthy. But it is necessary to know that the aim of rebellion is peace within the soul and not perpetual revolt. Amen." Whew!

The meeting room was fiIled with young people, mostly students, so Board President Ted Heusel moved to skip the first part of the agenda and go directly to the discipline policy, asking for comments from the audience. A stream of students, parents, and concerned community members spoke into the microphone, at least 90% of whom were totally opposed to the policy. Danny Ezekial, a student, asked that the board reject the proposal and try to adopt a policy that would "clearheadedly and rationally deal with the problems of disruption in the schools, rather than cause them." He was followed by a woman who leaned very heavily towards right wing Republican style rhetoric in which she commended the Board for their review of the policy, and rambled on about learning to express oneself without resorting to violence or intimidation, about providing an un-disruptive atmosphere for teachers and a setting conducive to learning for students, and about school facilities being arenas for the sole performance of incorrigibles. Her fascist mentality came right on through as she continued, stating that if students could not exhibit self control in the school environment, it is the responsibility of outside forces to exercise restraints in order to serve the interests of the total school population. But her law and order, total control speech didn't make a dent on the students, many of whom feel that it's the Board who's incorrigible and using tactics of intimidation and violence. So needless to say, the audience response to her speech was less than enthusiastic.

A woman with five children in the Ann Arbor School System spoke next about the existing disciplinary policy. In September of 72 she said there were 73 suspensions in the secondary schools, 41 of which were neither for bodily harm or disruptive activity. Instead they were for such "crimes" as cutting classes, tardiness, chronic absenteeism, and smoking in unauthorized areas. Out of the 73 only 10 received counseling, and one received social work service, although helping the students modify their behavior was supposedly a strong part of the 71-72 policy. She conceded that maybe the policy didn't work only she wasn't sure anyone had tried to make it work. Then she ended by asking who was to protect the students when a policy was misapplied? President Heusel responded saying that this session is for comments and petitions from the public and that they were listening. The woman rejected that position, causing the crowd to join in the demand for an answer. Heusel flipped out and loudly said, "Don't tell me. l'll keep order here or out!" Heusel exposed the Board even further by saying they would permit the public to make comments but that was it.

The session was getting really heated and another woman spoke explaining that there were hundreds of people outside the room who couldn't hear and weren't being represented. Heusel refused to adjourn to a larger space and so the students gave up their chairs in order for more people to crowd in. At least 300 people were on hand to let the Board know the policy was very unpopular.

Many other people spoke out against the policy during the remainder of the meeting, citing that there was no student participation in drawing up the policy even though students are the ones directly affected by it. A sister said, "when someone is uncomfortable with the situation around them and causes some kind of disruption, if those who are faced with the disruption deal with the person with understanding, the results are to benefit everyone. But on the other hand, these rules could lead to fierce punishment without any consideration of the situation and the environment. The rules themselves don't stop the disruption anyway. They only apply in the aftermath of it and their only purpose or justification is revenge or punitive action against the wrongdoers."

A short haired brother on crutches with his foot in a cast said that he was a jock and he didn't like the policy and that a lot of jocks were talking about how bad it was and were opposing it. Even the vice-president of the Tappan Junior High Student Council spoke against the policy. By the end of the speakers it was clear that the majority of the community were totally opposed to the policy.

Most of the Board seems to want to have a triviality like that stand in their way. But several Trustees were having second thoughts. Trustee Conn went into a long boring monologue about various changes (32 in all) in the policy, but it was clear the changes were minor and designed to make the Board's attitude seem to be changing while in fact staying in the same. Trustee Good then moved that the Board re-adopt the 71-72 policy instead of accepting the new one and was seconded by Trustee Johnson. This began a series of attempts by Good, Johnson, and Chesborough to keep the policy from going through. A vote was taken and the motion lost 6-3. It was evident then that the policy would be rammed through and shortly thereafter, it was. From that point on, total chaos reigned. Some students began yelling "Strike!" and went outside to discuss what to do. Minutes later, all the students went back into the meeting and began arguing with the Trustees. Nothing stood to be accomplished there so within 15 minutes everyone left.

There have been several demonstrations against the policy in the 1 1/2 weeks since the Board meeting. On Friday 300 people formed picket lines at Tappan Junior High. Following that a smaller group went to the Administration Building to speak to Supt. Bruce McPherson. He wasn't in so a small scale sit-in occurred. Ann Arbor police were called and a meeting was set up with the Supt., but only after the students were told to split or go to jail.

The meeting came off on Nov. 7 and McPherson told the students that he was opposed to the policy and knew it wouldn't work out. But he added that there was nothing he could do.

On Thursday, Nov. 9, students began a strike at Huron High School. Only about 75 people turned out and the strike was called off. The poor turnout could have been because it was the last day before marking and students feared reprisals. But many students don't really know what's in store for them.

What will happen in the future is uncertain. The policy will be in effect by the time you read this. Students at Pioneer II and Community High won't be affected because of liberal school officials but that doesn't hold true for other schools. Legal action will be brought against the policy, but strikes and demonstrations seem to have very little effect so far.

Look for more news on the discipline policy in future issues of the SUN.