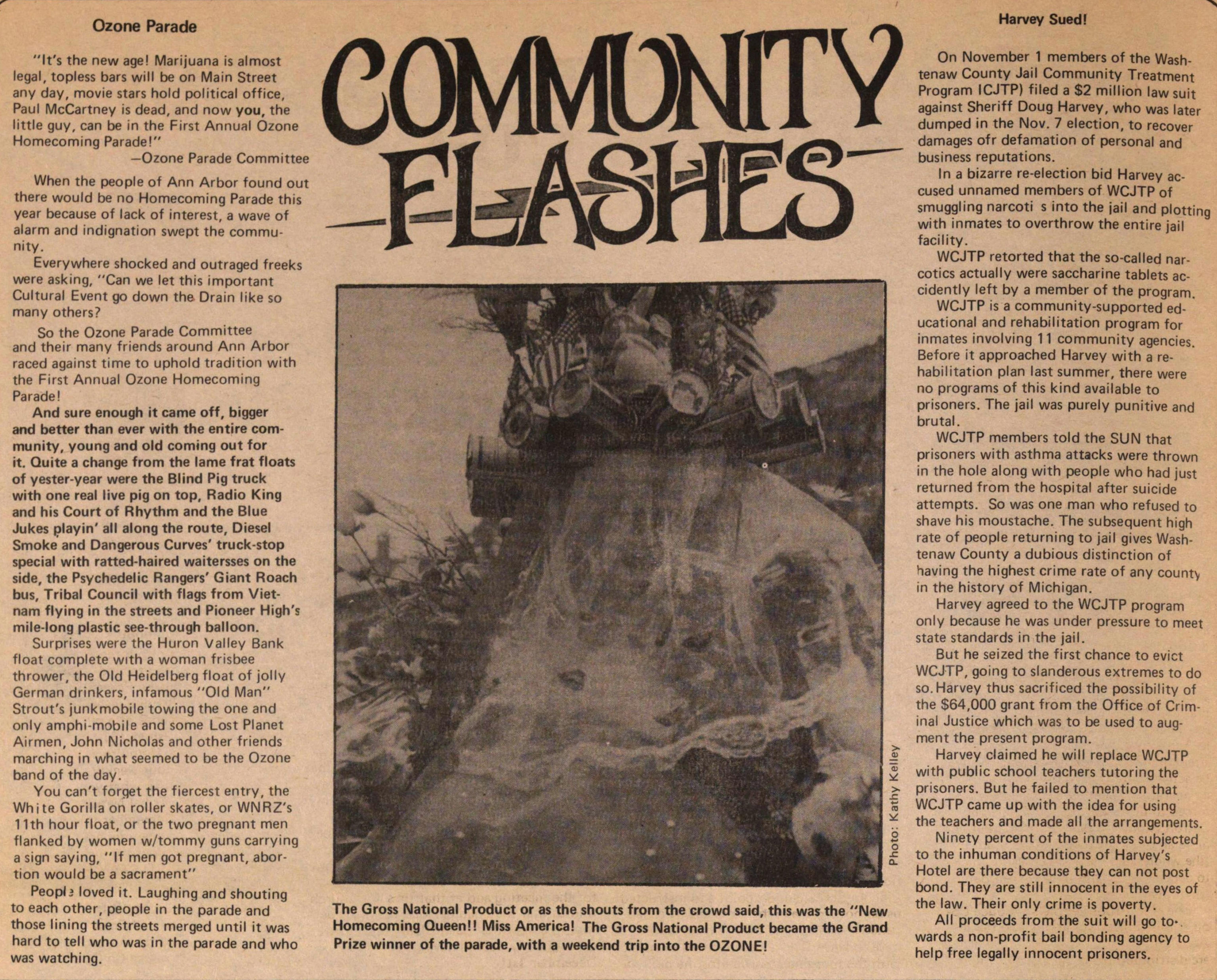 "It's the new age! Marijuana is almost legal, topless bars will be on Main Street any day, movie stars hold political office, Paul McCartney is dead, and now you, the little guy, can be in the First Annual Ozone Homecoming Parade!" -Ozone Parade Committee

When the people of Ann Arbor found out there would be no Homecoming Parade this year because of lack of interest, a wave of alarm and indignation swept the community.

Everywhere shocked and outraged freeks were asking, "Can we let this important Cultural Event go down the Drain like so many others?

So the Ozone Parade Committee and their many friends around Ann Arbor raced against time to uphold tradition with the First Annual Ozone Homecoming Parade!

And sure enough it came off, bigger and better than ever with the entire community, young and old coming out for it. Quite a change from the lame frat floats of yester-year were the Blind Pig truck with one real live pig on top. Radio King and his Court of Rhythm and the Blue Jukes playin' all along the route. Diesel Smoke and Dangerous Curves' truck-stop special with ratted-haired waitresses on the side, the Psychedelic Rangers' Giant Roach bus. Tribal Council with flags from Vietnam flying in the streets and Pioneer High's mile-long plastic see-through balloon.

Surprises were the Huron Valley Bank float complete with a woman frisbee thrower, the Old Heidelberg float of jolly German drinkers, infamous "Old Man" Strout's junkmobile towing the one and only amphi-mobile and some Lost Planet Airmen, John Nicholas and other friends marching in what seemed to be the Ozone band of the day.

You can't forget the fiercest entry, the White Gorilla on roller skates, or WNRZ's 11th hour float, or the two pregnant men flanked by women w/tommy guns carrying a sign saying, "If men got pregnant, abortion would be a sacrament"

On November 1 members of the Washtenaw County Jail Community Treatment Program (WCJTP) filed a $2 million law suit against Sheriff Doug Harvey, who was later dumped n the Nov. 7 election, to recover damages for defamation of personal and business reputations.

In a bizarre re-election bid Harvey accused unnamed members of WCJTP of smuggling narcotics into the jail and plotting with inmates to overthrow the entire jail facility.

WCJTP retorted that the so-called narcotics actually were saccharine tablets accidentally left by a member of the program.

WCJTP is a community -supported educational and rehabilitation program for inmates involving 11 community agencies. Before it approached Harvey with a rehabilitation plan last summer, there were no programs of this kind available to prisoners. The jail was purely punitive and brutal.

WCJTP members told the SUN that prisoners with asthma attacks were thrown in the hole along with people who had just returned from the hospital after suicide attempts. So was one man who refused to shave his moustache. The subsequent high rate of people returning to jail gives Washtenaw County a dubious distinction of having the highest crime rate of any county in the history of Michigan.

Harvey agreed to the WCJTP program only because he was under pressure to meet state standards in the jail.

But he seized the first chance to evict WCJTP, going to slanderous extremes to do so. Harvey thus sacrificed the possibility of the $64,000 grant from the Office of Criminal Justice which was to be used to augment the present program.

Harvey claimed he will replace WCJTP with public school teachers tutoring the prisoners. But he failed to mention that WCJTP came up with the idea for using the teachers and made all the arrangements.

Ninety percent of the inmates subjected to the inhuman conditions of Harvey's Hotel are there because they can not post bond. They are still innocent in the eyes of the law. Their only crime is poverty.

All proceeds from the suit will go towards a non-profit bail bonding agency to help free legally innocent prisoners.