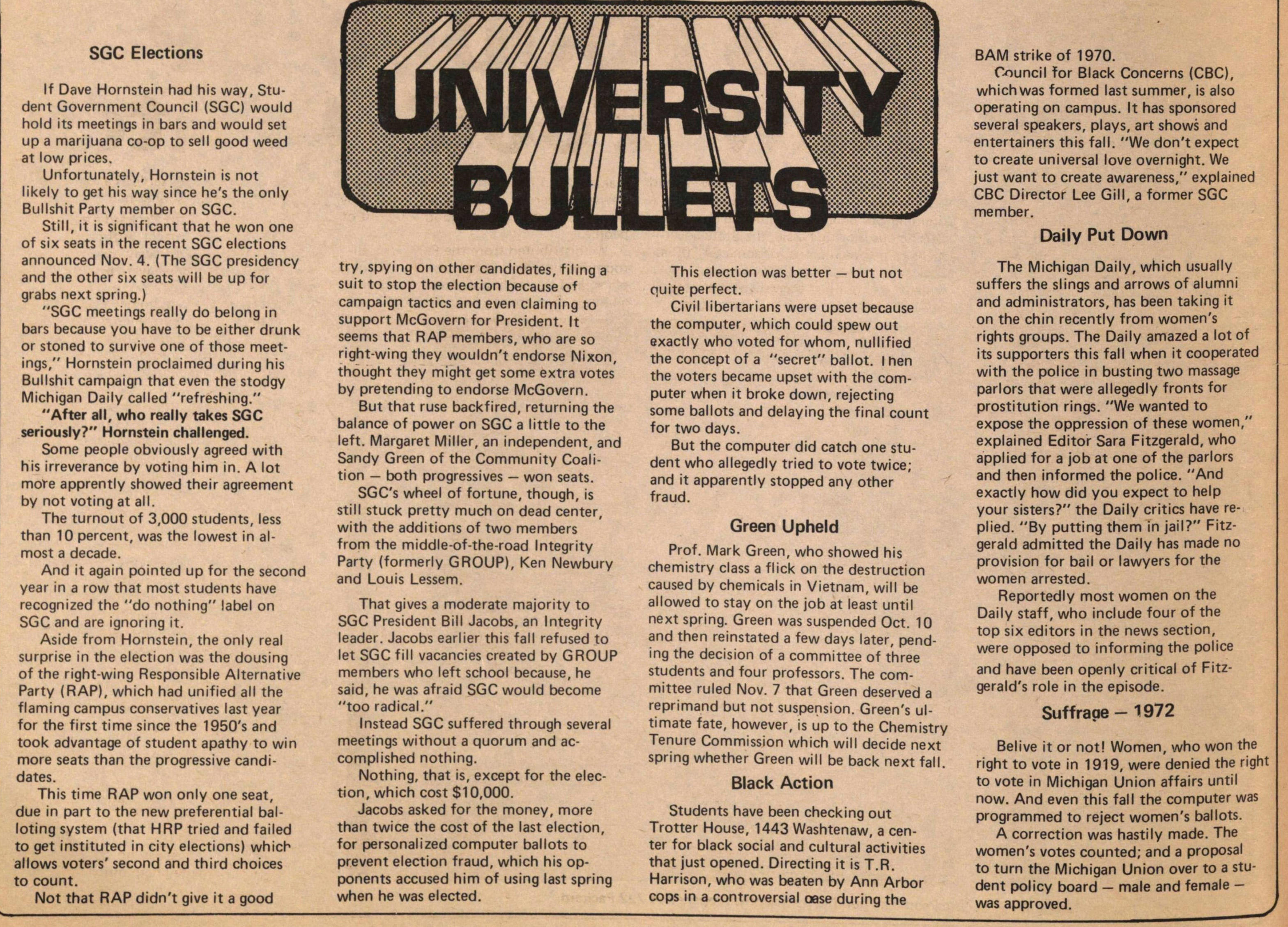 If Dave Hornstein had his way. Student Government Council (SGC) would hold ts meetings in bars and would set up a marijuana co-op to sell good weed at low prices.

Unfortunately, Hornstein is not likely to get his way since he's the only Bullshit Party member on SGC.

Still, it is significant that he won one of six seats in the recent SGC elections announced Nov. 4. (The SGC presidency and the other six seats will be up for grabs next spring.)

"SGC meetings really do belong in bars because you have to be either drunk or stoned to survive one of those meetings," Hornstein proclaimed during his Bullshit campaign that even the stodgy Michigan Daily called "refreshing."

"After all, who really takes SGC seriously?" Hornstein challenged.

Some people obviously agreed with his irreverence by voting him in. A lot more apparently showed their agreement by not voting at all.

The turnout of 3,000 students, less than 10 percent, was the lowest in almost a decade.

And it again pointed up for the second year in a row that most students have recognized the "do nothing" label on SGC and are ignoring it.

Aside from Hornstein, the only real surprise in the election was the dousing of the right-wing Responsible Alternative Party (RAP), which had unified all the flaming campus conservatives last year for the first time since the 1950's and took advantage of student apathy to win more seats than the progressive candidates.

This time RAP won only one seat, due in part to the new preferential balloting system (that HRP tried and failed to get instituted in city elections) which allows voters' second and third choices to count.

Not that RAP didn't give it a good try, spying on other candidates, filing a suit to stop the election because of campaign tactics and even claiming to support McGovern for President. It seems that RAP members, who are so right-wing they wouldn't endorse Nixon, thought they might get some extra votes by pretending to endorse McGovern.

But that ruse backfired, returning the balance of power on SGC a little to the left. Margaret Miller, an independent, and Sandy Green of the Community Coalition - both progressives - won seats.

SGC's wheel of fortune, though, is still stuck pretty much on dead center, with the additions of two members from the middle-of-the-road Integrity Party (formerly GROUP), Ken Newbury and Louis Lessem.

That gives a moderate majority to SGC President Bill Jacobs, an Integrity leader. Jacobs earlier this fall refused to let SGC fill vacancies created by GROUP members who left school because, he said, he was afraid SGC would become "too radical."

Instead SGC suffered through several meetings without a quorum and accomplished nothing.

Jacobs asked for the money, more than twice the cost of the last election, for personalized computer ballots to prevent election fraud, which his opponents accused him of using last spring when he was elected.

This election was better - but not quite perfect.

Civil libertarians were upset because the computer, which could spew out exactly who voted for whom, nullified the concept of a "secret" ballot. Then the voters became upset with the computer when it broke down, rejecting some ballots and delaying the final count for two days.

But the computer did catch one student who allegedly tried to vote twice; and it apparently stopped any other fraud.

Prof. Mark Green, who showed his chemistry class a flick on the destruction caused by Chemicals in Vietnam, will be allowed to stay on the job at least until next spring. Green was suspended Oct. 10 and then reinstated a few days later, pending the decision of a committee of three students and four professors. The committee ruled Nov. 7 that Green deserved a reprimand but not suspension. Green's ultimate fate, however, is up to the Chemistry Tenure Commission which will decide next spring whether Green will be back next fall.

Students have been checking out Trotter House, 1443 Washtenaw, a center for black social and cultural activities that just opened. Directing it is T.R. Harrison, who was beaten by Ann Arbor cops in a controversial case during the BAM strike of 1970.

The Michigan Daily, which usually suffers the slings and arrows of alumni and administrators, has been taking it on the chin recently from women's rights groups. The Daily amazed a lot of its supporters this fall when it cooperated with the police in busting two massage parlors that were allegedly fronts for prostitution rings. "We wanted to expose the oppression of these women," explained Editor Sara Fitzgerald, who applied for a job at one of the parlors and then informed the police. "And exactly how did you expect to help your sisters?" the Daily critics have replied. "By putting them in jail?" Fitzgerald admitted the Daily has made no provision for bail or lawyers for the women arrested.

Reportedly most women on the Daily staff, who include four of the top six editors in the news section, were opposed to informing the police and have been openly critical of Fitzgerald's role in the episode.

A correction was hastily made. The women's votes counted; and a proposal to turn the Michigan Union over to a student policy board - male and female - was approved.