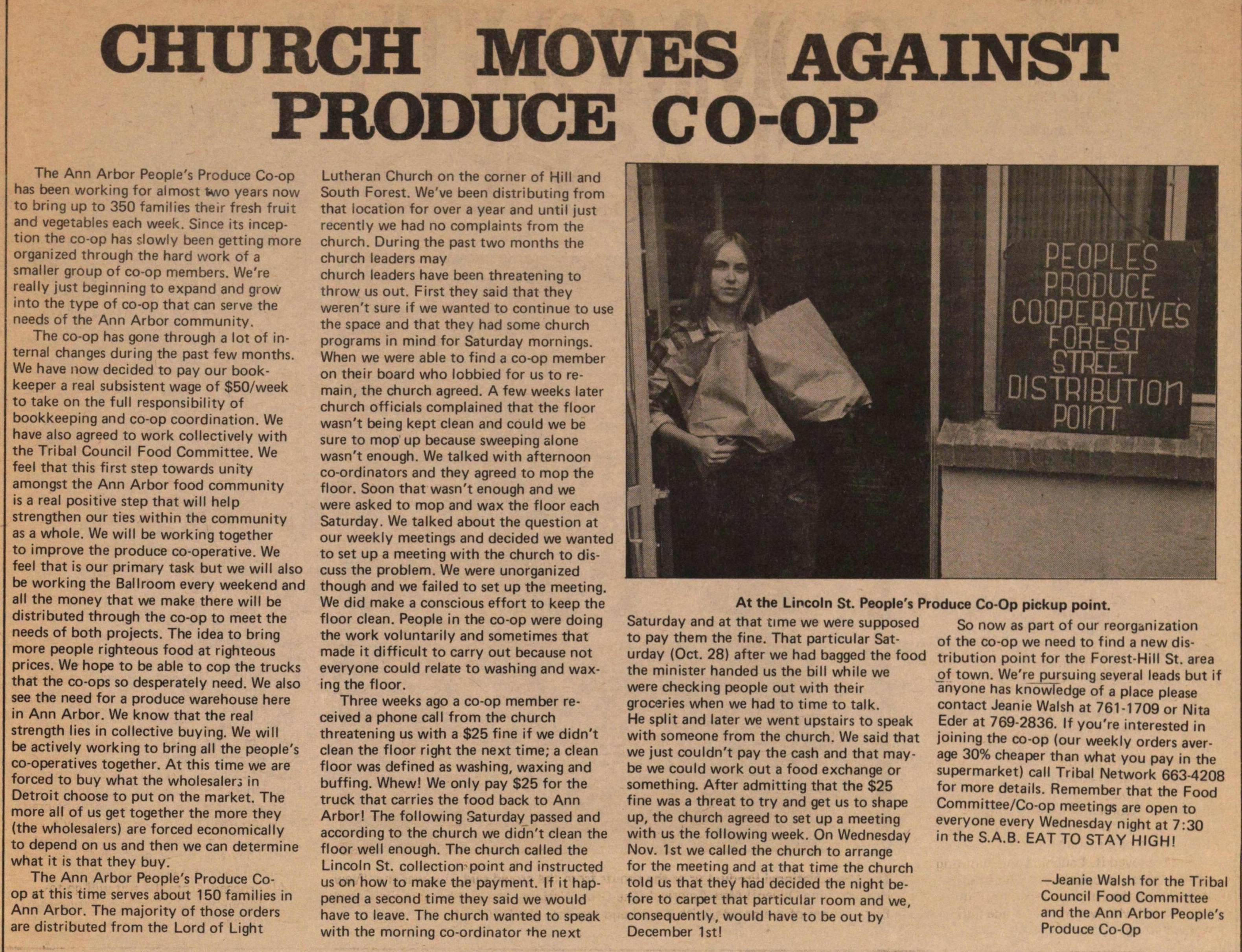 The Ann Arbor People's Produce Co-op has been working for almost two years now to bring up to 350 families their fresh fruit and vegetables each week. Since its inception the co-op has slowly been getting more organized through the hard work of a smaller group of co-op members. We're really just beginning to expand and grow into the type of co-op that can serve the needs of the Ann Arbor community.

The co-op has gone through a lot of internal changes during the past few months. We have now decided to pay our bookkeeper a real subsistence wage of $50/week to take on the full responsibility of bookkeeping and co-op coordination. We have also agreed to work collectively with the Tribal Council Food Committee. We feel that this first step towards unity among the Ann Arbor food community is a real positive step that will help strengthen our ties within the community as a whole. We will be working together to improve the produce co-operative. We feel that is our primary task but we will also be working the Ballroom every weekend and all the money that we make there will be distributed through the co-op to meet the needs of both projects. The idea to bring more people righteous food at righteous prices. We hope to be able to cop the trucks that the co-ops so desperately need. We also see the need for a produce warehouse here in Ann Arbor. We know that the real strength lies in collective buying. We will be actively working to bring all the people's co-operatives together. At this time we are forced to buy what the wholesalers in Detroit choose to put on the market. The more all of us get together the more they (the wholesalers) are forced economically to depend on us and then we can determine what it is that they buy.

The Ann Arbor People's Produce Coop at this time serves about 150 families in Ann Arbor. The majority of those orders are distributed from the Lord of Light Lutheran Church on the corner of Hill and South Forest. We've been distributing from that location for over a year and until just recently we had no complaints from the church. During the past two months the church leaders may church have been threatening to throw us out. First they said that they weren't sure if we wanted to continue to use the space and that they had some church programs in mind for Saturday mornings. When we were able to find a co-op member on their board who lobbied for us to remain, the church agreed. A few weeks later church officials complained that the floor wasn't being kept clean and could we be sure to mop up because sweeping alone wasn't enough. We talked with afternoon coordinators and they agreed to mop the floor. Soon that wasn't enough and we were asked to mop and wax the floor each Saturday. We talked about the question at our weekly meetings and decided we wanted to set up a meeting with the church to discuss the problem. We were unorganized though and we failed to set up the meeting. We did make a conscious effort to keep the floor clean. People in the co-op were doing the work voluntarily and sometimes that made it difficult to carry out because not everyone could relate to washing and waxing the floor.

Three weeks ago a co-op member received a phone call from the church threatening us with a $25 fine if we didn't clean the floor right the next time; a clean floor was defined as washing, waxing and buffing. Whew! We only pay $25 for the truck that carries the food back to Ann Arbor! The following Saturday passed and according to the church we didn't clean the floor well enough. The church called the Lincoln St. collection point and instructed us on how to make the payment. If it happened a second time they said we would have to leave. The church wanted to speak with the morning coordinator the next Saturday and at that time we were supposed to pay them the fine. That particular Saturday (Oct. 28) after we had bagged the food the minister handed us the bill while we were checking people out with their groceries when we had to time to talk. He split and later we went upstairs to speak with someone from the church. We said that we just couldn't pay the cash and that maybe we could work out a food exchange or something. After admitting that the $25 fine was a threat to try and get us to shape up, the church agreed to set up a meeting with us the following week. On Wednesday Nov. 1st we called the church to arrange for the meeting and at that time the church told us that they had decided the night before to carpet that particular room and we, consequently, would have to be out by December 1st!

So now as part of our reorganization of the co-op we need to find a new distribution point for the Forest-Hill St. area of town. We're pursuing several leads but if anyone has knowledge of a place please contact Jeanie Walsh at 761-1709 or Nita Eder at 769-2836. If you're interested in joining the co-op (our weekly orders average 30% cheaper than what you pay in the supermarket) call Tribal Network 663-4208 for more details. Remember that the Food Committee/Co-op meetings are open to everyone every Wednesday night at 7:30 in the S.A.B. EAT TO STAY HIGH!