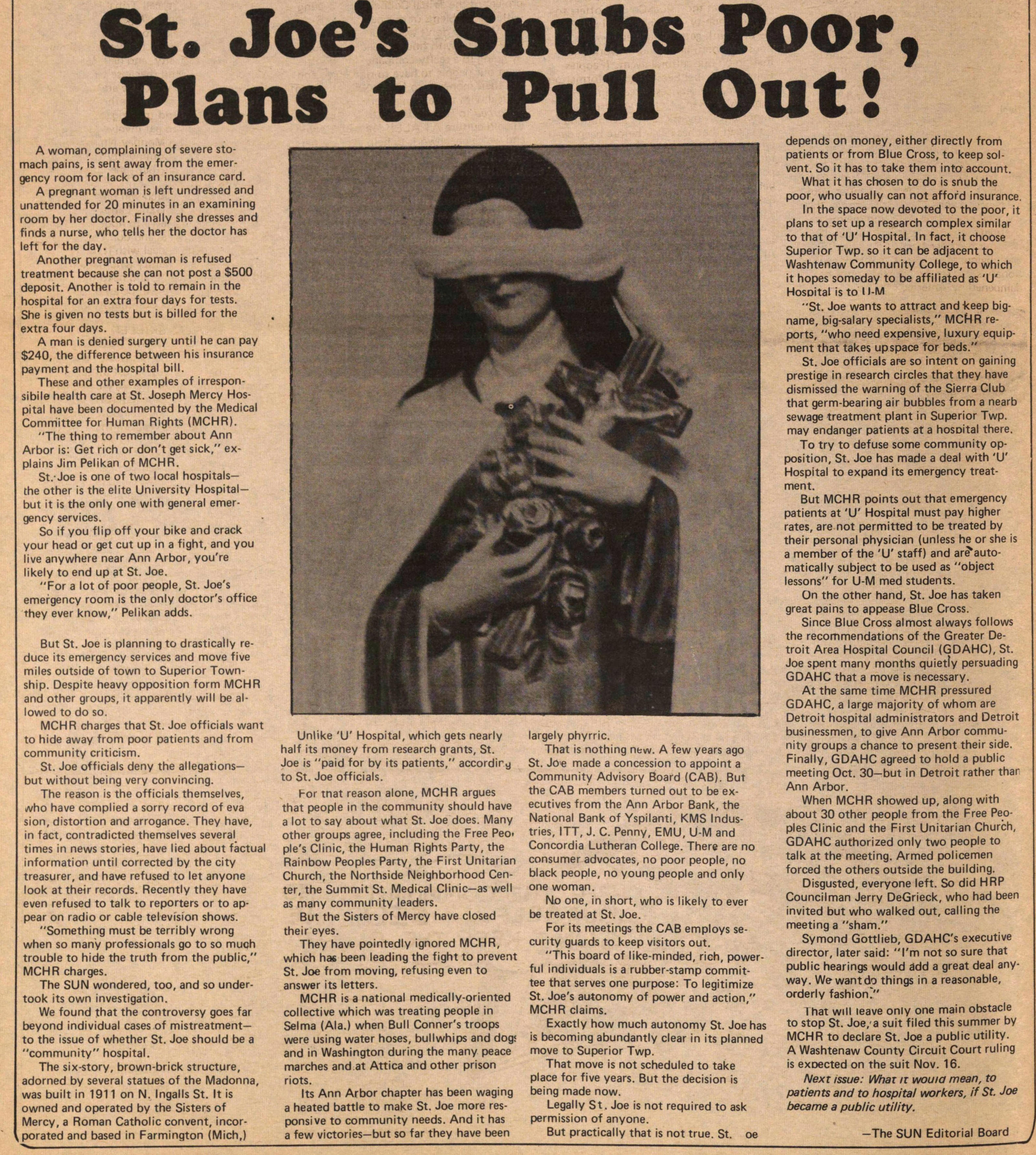 A woman, complaining of severe stomach pains, is sent away from the emergency room for lack of an insurance card.

A pregnant woman is left undressed and unattended for 20 minutes in an examining room by her doctor. Finally she dresses and finds a nurse, who tells her the doctor has left for the day.

Another pregnant woman is refused treatment because she can not post a $500 deposit. Another is told to remain in the hospital for an extra four days for tests. She is given no tests but is billed for the extra four days.

A man is denied surgery until he can pay $240, the difference between his insurance payment and the hospital bill.

These and other examples of irresponsible health care at St. Joseph Mercy Hospital have been documented by the Medical Committee for Human Rights (MCHR).

"The thing to remember about Ann Arbor is: Get rich or don't get sick," explains Jim Pelikan of MCHR.

St.Joe is one of two local hospitals-the other is the elite University Hospital-but it is the only one with general emergency services.

So if you flip off your bike and crack your head or get cut up in a fight, and you live anywhere near Ann Arbor, you're likely to end up at St. Joe.

"For a lot of poor people, St. Joe's emergency room is the only doctor's office they ever know," Pelikan adds.

But St. Joe is planning to drastically reduce its emergency services and move five miles outside of town to Superior Township. Despite heavy opposition form MCHR and other groups, it apparently will be allowed to do so.

MCHR charges that St. Joe officials want to hide away from poor patients and from community criticism.

St. Joe officials deny the allegations-but without being very convincing.

The reason is the officials themselves, who have complied a sorry record of evasion, distortion and arrogance. They have, in fact, contradicted themselves several times in news stories, have lied about factual information until corrected by the city treasurer, and have refused to let anyone look at their records. Recently they have even refused to talk to reporters or to appear on radio or cable television shows.

"Something must be terribly wrong when so many professionals go to so much trouble to hide the truth from the public," MCHR charges.

The SUN wondered, too, and so undertook its own investigation.

We found that the controversy goes far beyond individual cases of mistreatment- to the issue of whether St. Joe should be a "community" hospital.

The six-story, brown-brick structure, adorned by several statues of the Madonna, was built in 1911 on N. Ingalls St. It is owned and operated by the Sisters of Mercy, a Roman Catholic convent, incorporated and based in Farmington (Mich).

Unlike 'U' Hospital, which gets nearly half its money from research grants, St. Joe is "paid for by its patients," according to St. Joe officials.

For that reason alone, MCHR argues that people in the community should have a lot to say about what St. Joe does. Many other groups agree, including the Free People's Clinic, the Human Rights Party, the Rainbow Peoples Party, the First Unitarian Church, the Northside Neighborhood Center, the Summit St. Medical Clinic-as well as many community leaders.

But the Sisters of Mercy have closed their eyes.

They have pointedly ignored MCHR, which has been leading the fight to prevent St. Joe from moving, refusing even to answer its letters.

MCHR is a national medically-oriented collective which was treating people in Selma (Ala.) when Bull Conner's troops were using water hoses, bullwhips and dogs and in Washington during the many peace marches and at Attica and other prison riots.

Its Ann Arbor chapter has been waging a heated battle to make St. Joe more responsive to community needs. And it has a few victories- but so far they have been largely phyrric.

That is nothing new. A few years ago St. Joe made a concession to appoint a Community Advisory Board (CAB). But the CAB members turned out to be executives from the Ann Arbor Bank, the National Bank of Ypsilanti, KMS Industries, ITT, J. C. Penny, EMU, U-M and Concordia Lutheran College. There are no consumer advocates, no poor people, no black people, no young people and only one woman.

No one, in short, who is likely to ever be treated at St. Joe.

For its meetings the CAB employs security guards to keep visitors out.

"This board of like-minded, rich, powerful individuals is a rubber-stamp committee that serves one purpose: To legitimize St. Joe's autonomy of power and action," MCHR claims.

Exactly how much autonomy St. Joe has is becoming abundantly clear in its planned move to Superior Twp.

That move is not scheduled to take place for five years. But the decision is being made now.

Legally St. Joe is not required to ask permission of anyone.

But practically that is not true. St. Joe depends on money, either directly from patients or from Blue Cross, to keep solvent. So it has to take them into account.

What it has chosen to do is snub the poor, who usually can not afford insurance.

In the space now devoted to the poor, it plans to set up a research complex similar to that of 'U' Hospital. In fact, it choose Superior Twp. so it can be adjacent to Washtenaw Community College, to which it hopes someday to be affiliated as 'U' Hospital is to U-M

St. Joe officials are so intent on gaining prestige in research circles that they have dismissed the warning of the Sierra Club that germ-bearing air bubbles from a nearby sewage treatment plant in Superior Twp. may endanger patients at a hospital there.

To try to defuse some community opposition, St. Joe has made a deal with 'U' Hospital to expand its emergency treatment.

But MCHR points out that emergency patients at 'U' Hospital must pay higher rates, are not permitted to be treated by their personal physician (unless he or she is a member of the 'U' staff) and are automatically subject to be used as "object lessons" for U-M med students.

On the other hand, St. Joe has taken great pains to appease Blue Cross.

At the same time MCHR pressured GDAHC, a large majority of whom are Detroit hospital administrators and Detroit businessmen, to give Ann Arbor community groups a chance to present their side. Finally, GDAHC agreed to hold a public meeting Oct. 30-but in Detroit rather than Ann Arbor.

When MCHR showed up, along with about 30 other people from the Free Peoples Clinic and the First Unitarian Church, GDAHC authorized only two people to talk at the meeting. Armed policemen forced the others outside the building.

Disgusted, everyone left. So did HRP Councilman Jerry DeGrieck, who had been invited but who walked out, calling the meeting a "sham."

Symond Gottlieb, GDAHC's executive director, later said: "l'm not so sure that public hearings would add a great deal anyway. We want do things in a reasonable, orderly fashion."

That will leave only one main obstacle to stop St. Joe, a suit filed this summer by MCHR to declare St. Joe a public utility. A Washtenaw County Circuit Court ruling is expected on the suit Nov. 16.

Next issue: What it would mean, to patients and to hospital workers, if St. Joe became a public utility.

-The SUN Editorial Board