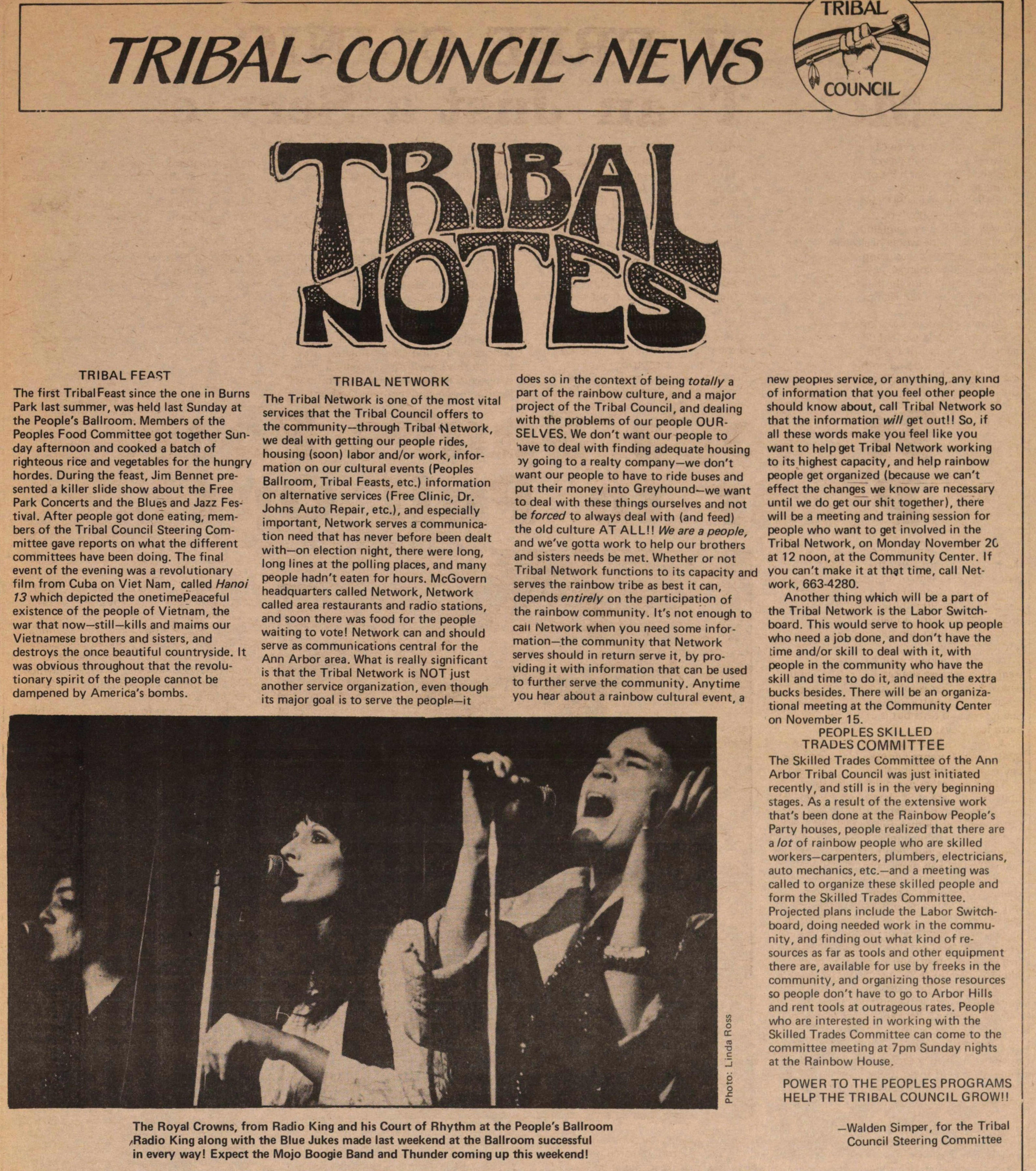 The first Tribal Feast since the one in Burns Park last summer, was held last Sunday at the People's Ballroom. Members of the Peoples Food Committee got together Sunday afternoon and cooked a batch of righteous rice and vegetables for the hungry hordes. During the feast, Jim Bennet presented a killer slide show about the Free Park Concerts and the Blues and Jazz Festival. After people got done eating, members of the Tribal Council Steering Committee gave reports on what the different committees have been doing. The final event of the evening was a revolutionary film from Cuba on Viet Nam, called Hanoi 13 which depicted the one time peaceful existence of the people of Vietnam, the war that now- still- kills and maims our Vietnamese brothers and sisters, and destroys the once beautiful countryside. It was obvious throughout that the revolutionary spirit of the people cannot be dampened by America's bombs.

The Tribal Network is one of the most vital services that the Tribal Council offers to the community-through Tribal Network, we deal with getting our people rides, housing (soon) labor and/or work, information on our cultural events (Peoples Ballroom, Tribal Feasts, etc.) information on alternative services (Free Clinic, Dr. Johns Auto Repair, etc), and especially important, Network serves a communication need that has never before been dealt with- on election night, there were long, long lines at the polling places, and many people hadn't eaten for hours. McGovern headquarters called Network, Network called area restaurants and radio stations, and soon there was food for the people waiting to vote! Network can and should serve as communications central for the Ann Arbor area. What is really significant is that the Tribal Network is NOT just another service organization, even though its major goal is to serve the people- it does so n the context of being totally a part of the rainbow culture, and a major project of the Tribal Council, and dealing with the problems of our people OURSELVES. We don't want our people to have to deal with finding adequate housing by going to a realty company- we don't want our people to have to ride buses and put their money into Greyhound- we want to deal with these things ourselves and not be forced to always deal with (and feed) the old culture AT ALL!! We are a people, and we've gotta work to help our brothers and sisters needs be met. Whether or not Tribal Network functions to its capacity and serves the rainbow tribe as best it can, depends entirely on the participation of the rainbow community. It's not enough to call Network when you need some information- the community that Network serves should in return serve it, by providing it with information that can be used to further serve the community. Anytime you hear about a rainbow cultural event, a new peoples service, or anything, any kind of information that you feel other people should know about, call Tribal Network so that the information will get out!! So, if all these words make you feel like you want to help get Tribal Network working to its highest capacity, and help rainbow people get organized (because we can't effect the changes we know are necessary until we do get our shit together), there will be a meeting and training session for people who want to get involved in the Tribal Network, on Monday November 20 at 12 noon, at the Community Center. If you can't make it at that time, call Network, 663-4280.

Another thing which will be a part of the Tribal Network is the Labor Switchboard. This would serve to hook up people who need a job done, and don't have the time and/or skill to deal with it, with people in the community who have the skill and time to do it, and need the extra bucks besides. There will be an organizational meeting at the Community Center on November 15.

The Skilled Trades Committee of the Ann Arbor Tribal Council was just initiated recently, and still is in the very beginning stages. As a result of the extensive work that's been done at the Rainbow People's Party houses, people realized that there are a lot of rainbow people who are skilled workers- carpenters, plumbers, electricians, auto mechanics, etc.- and a meeting was called to organize these skilled people and form the Skilled Trades Committee. Projected plans include the Labor Switchboard, doing needed work in the community, and finding out what kind of resources as far as tools and other equipment there are, available for use by freeks in the community, and organizing those resources so people don't have to go to Arbor Hills and rent tools at outrageous rates. People who are interested in working with the Skilled Trades Committee can come to the committee meeting at 7 pm Sunday nights at the Rainbow House.

POWER TO THE PEOPLES PROGRAMS

The Royal Crowns, from Radio King and his Court of Rhythm at the People's Ballroom.  Radio King along with the Blue Jukes made last weekend at the Ballroom successful in every way!  Expect the Mojo Boogie Band and Thunder coming up this weekend!