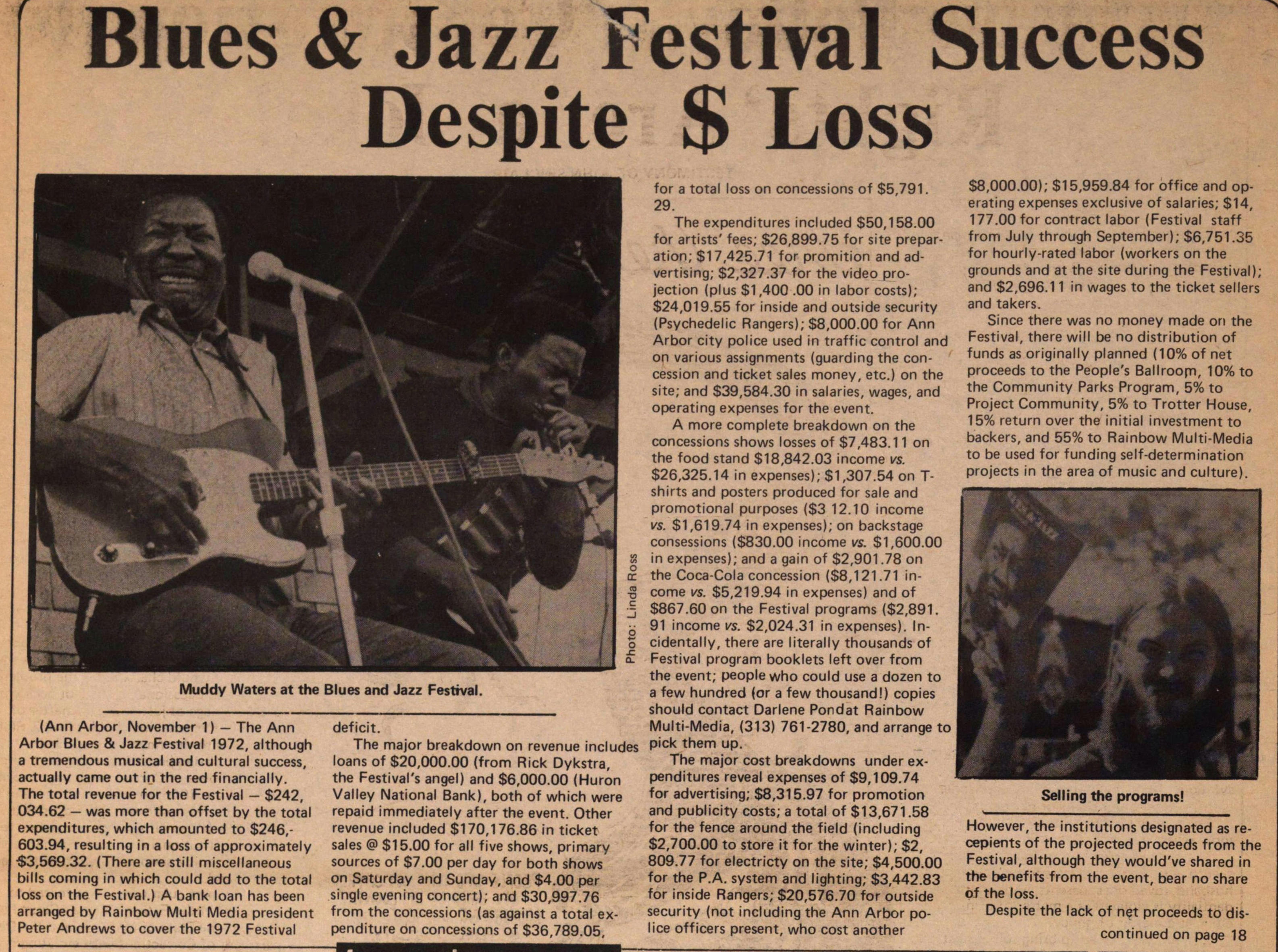 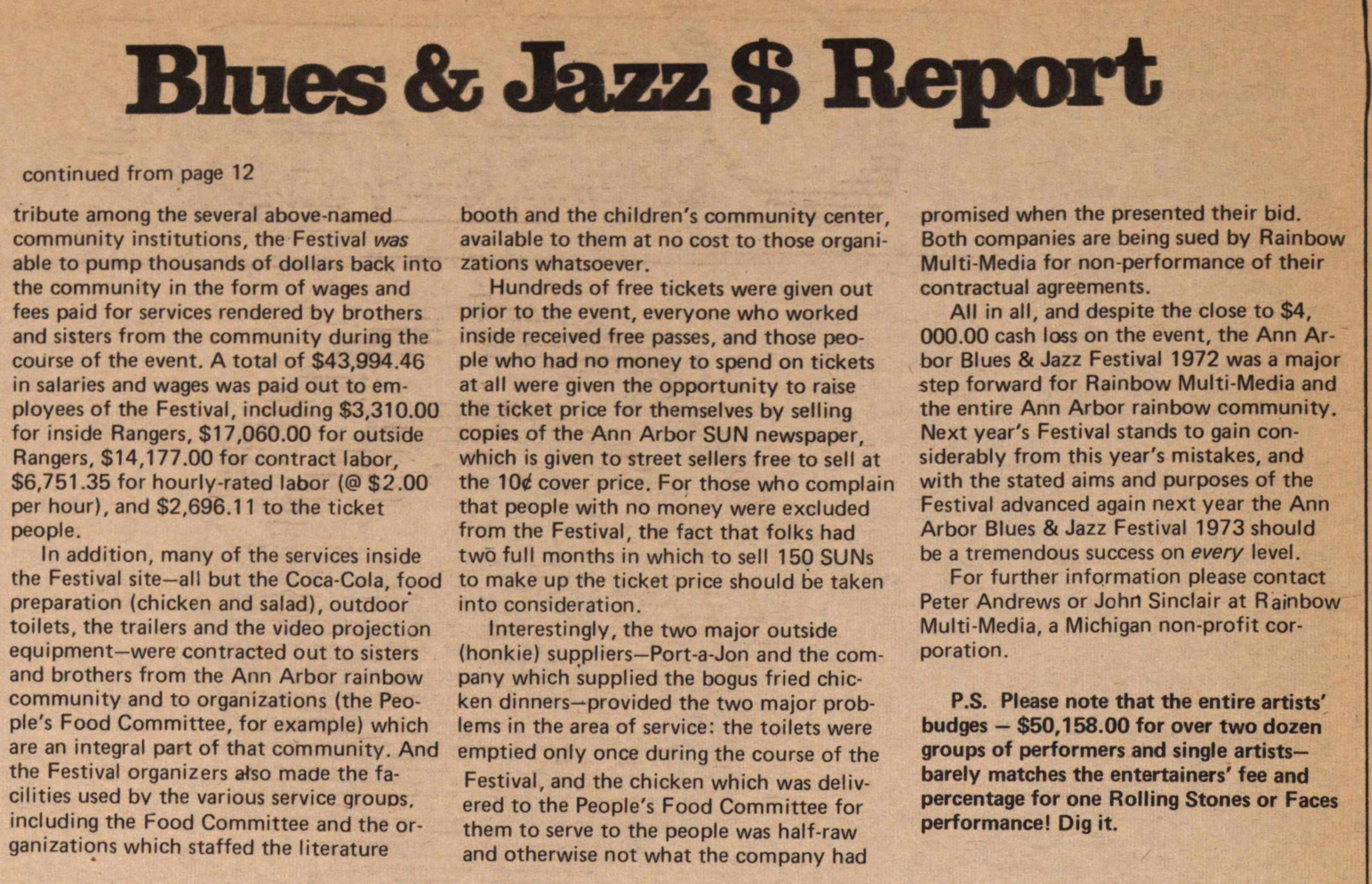 (Ann Arbor, November 1 ) - The Ann Arbor Blues & Jazz Festival 1972, although a tremendous musical and cultural success, actually came out in the red financially. The total revenue for the Festival - $242,034.62 - was more than offset by the total expenditures, which amounted to $246,603.94, resulting in a loss of approximately $3,569.32. (There are still miscellaneous bills coming in which could add to the total loss on the Festival.) A bank loan has been arranged by Rainbow Multi Media president Peter Andrews to cover the 1972 Festival deficit. The major breakdown on revenue includes loans of $20,000.00 (from Rick Dykstra, the Festival's angel) and $6,000.00 (Huron Valley National Bank), both of which were repaid immediately after the event. Other revenue included $170,176.86 in ticket sales @ $15.00 for all five shows, primary sources of $7.00 per day for both shows on Saturday and Sunday, and $4.00 per single evening concert; and $30,997.76 from the concessions (as against a total expenditure on concessions of $36,789.05, for a total loss on concessions of $5,791.29.

Since there was no money made on the Festival, there will be no distribution of funds as originally planned (10% of net proceeds to the People's Ballroom, 10% to the Community Parks Program, 5% to Project Community, 5% to Trotter House, 15% return over the initial investment to backers, and 55% to Rainbow Multi-Media to be used for funding self-determination projects in the area of music and culture). However, the institutions designated as recipients of the projected proceeds from the Festival, although they would've shared n the benefits from the event, bear no share of the loss.

Despite the lack of net proceeds to distribute among the several above-named community institutions, the Festival was able to pump thousands of dollars back into the community in the form of wages and fees paid for services rendered by brothers and sisters from the community during the course of the event. A total of $43,994.46 in salaries and wages was paid out to employees of the Festival, including $3,310.00 for inside Rangers, $17,060.00 for outside Rangers, $14,177.00 for contract labor, $6,751.35 for hourly-rated labor (@ $2.00 per hour), and $2,696.11 to the ticket people.

In addition, many of the services inside the Festival site-all but the Coca-Cola, food preparation (chicken and salad), outdoor toilets, the trailers and the video projection equipment- were contracted out to sisters and brothers from the Ann Arbor rainbow community and to organizations (the People's Food Committee, for example) which are an integral part of that community. And the Festival organizers also made the facilities used by the various service groups, including the Food Committee and the organizations which staffed the literature booth and the children's community center, available to them at no cost to those organizations whatsoever.

Hundreds of free tickets were given out prior to the event, everyone who worked inside received free passes, and those people who had no money to spend on tickets at all were given the opportunity to raise the ticket price for themselves by selling copies of the Ann Arbor SUN newspaper, which is given to street sellers free to sell at the 10 cover price. For those who complain that people with no money were excluded from the Festival, the fact that folks had two full months in which to sell 150 SUN's to make up the ticket price should be taken into consideration.

Interestingly, the two major outside (honkie) suppliers-Port-a-Jon and the company which supplied the bogus fried chicken dinners- provided the two major problems in the area of service: the toilets were emptied only once during the course of the Festival, and the chicken which was delivered to the People's Food Committee for them to serve to the people was half-raw and otherwise not what the company had promised when the presented their bid. Both companies are being sued by Rainbow Multi-Media for non-performance of their contractual agreements.

P.S. Please note that the entire artists' budgets - $50,158.00 for over two dozen groups of performers and single artists- barely matches the entertainers' fee and percentage for one Rolling Stones or Faces performance! Dig it.

Muddy Waters at the Blues and Jazz Festival