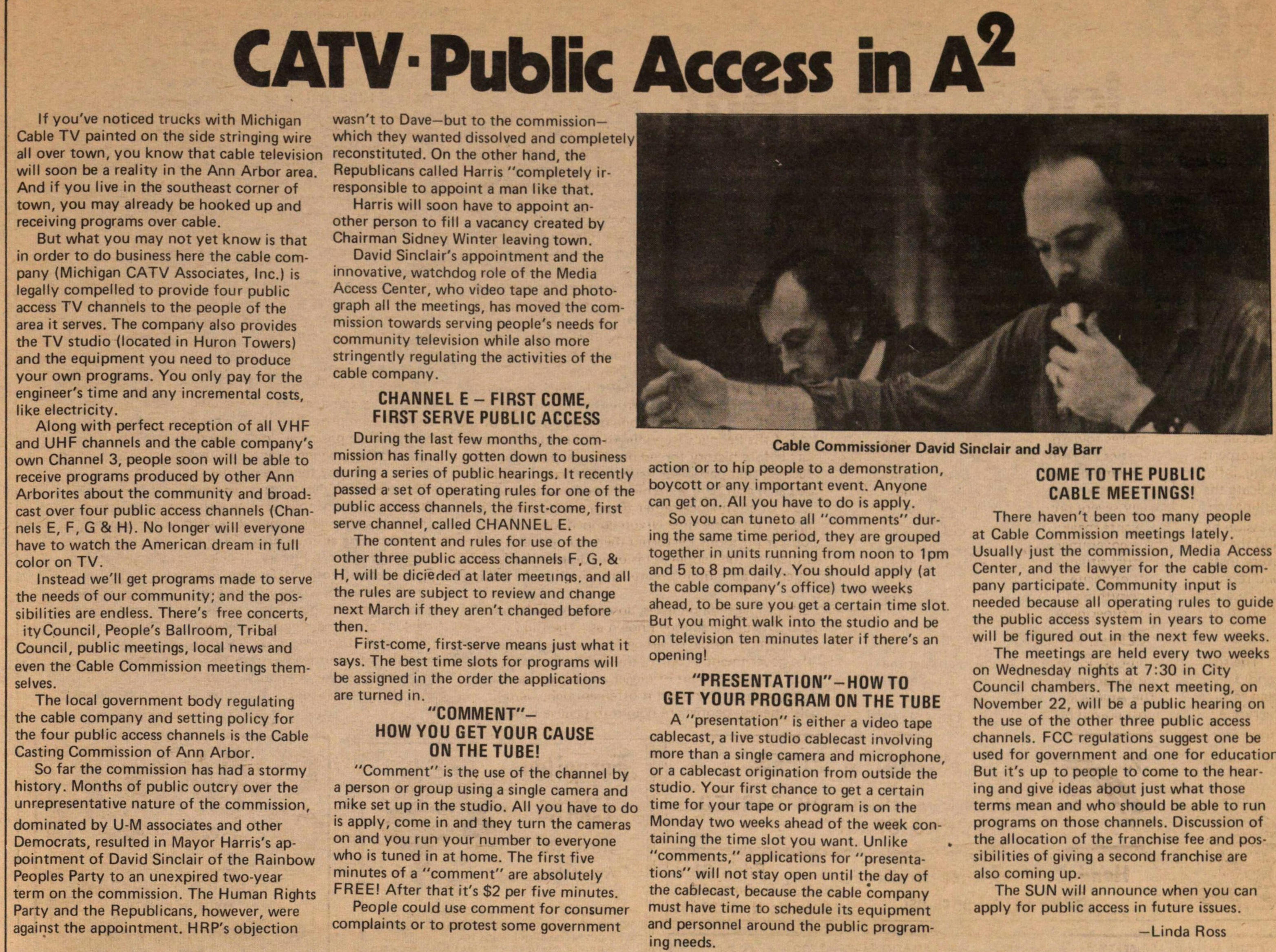 If you've noticed trucks with Michigan Cable TV painted on the side stringing wire all over town, you know that cable television will soon be a reality in the Ann Arbor area. And if you live in the southeast corner of town, you may already be hooked up and receiving programs over cable.

But what you may not yet know is that in order to do business here the cable company (Michigan CATV Associates, Inc.) is legally compelled to provide four public access TV channels to the people of the area it serves. The company also provides the TV studio (located in Huron Towers) and the equipment you need to produce your own programs. You only pay for the engineer's time and any incremental costs, like electricity.

Along with perfect reception of all VHF and UHF channels and the cable company's own Channel 3, people soon will be able to receive programs produced by other Ann Arborites about the community and broadcast over four public access channels (Channels E, F, G & H). No longer will everyone have to watch the American dream in full color on TV.

Instead we'll get programs made to serve the needs of our community; and the possibilities are endless. There's free concerts, CityCouncil, People's Ballroom, Tribal Council, public meetings, local news and even the Cable Commission meetings themselves.

The local government body regulating the cable company and setting policy for the four public access channels is the Cable Casting Commission of Ann Arbor.

So far the commission has had a stormy history. Months of public outcry over the unrepresentative nature of the commission, dominated by U-M associates and other Democrats, resulted in Mayor Harris's appointment of David Sinclair of the Rainbow Peoples Party to an unexpired two-year term on the commission. The Human Rights Party and the Republicans, however, were against the appointment. HRP's objection wasn't to Dave--but to the commission--which they wanted dissolved and completely reconstituted. On the other hand, the Republicans called Harris "completely irresponsible to appoint a man like that.

Harris will soon have to appoint another person to fill a vacancy created by Chairman Sidney Winter leaving town. David Sinclair's appointment and the innovative, watchdog role of the Media Access Center, who video tape and photograph all the meetings, has moved the commission towards serving people's needs for community television while also more stringently regulating the activities of the cable company.

During the last few months, the commission has finally gotten down to business during a series of public hearings. It recently passed a set of operating rules for one of the public access channels, the first-come, first serve channel, called CHANNEL E.

The content and rules for use of the other three public access channels F, G, & H, will be decided at later meetings, and all the rules are subject to review and change next March if they aren't changed before then.

First-come, first-serve means just what it says. The best time slots for programs will be assigned in the order the applications are turned in.

"COMMENT" - HOW YOU GET YOUR CAUSE ON THE TUBE!

"Comment" is the use of the channel by a person or group using a single camera and mike set up in the studio. All you have to do is apply, come in and they turn the cameras on and you run your number to everyone who is tuned in at home. The first five minutes of a "comment" are absolutely FREE! After that it's $2 per five minutes.

People could use comment for consumer complaints or to protest some government action or to hip people to a demonstration, boycott or any important event. Anyone can get on. All you have to do is apply.

So you can tune to all "comments" during the same time period, they are grouped together in units running from noon to 1pm and 5 to 8 pm daily. You should apply (at the cable company's office) two weeks ahead, to be sure you get a certain time slot. But you might walk into the studio and be on television ten minutes later if there's an opening!

"PRESENTATION" - HOW TO GET YOUR PROGRAM ON THE TUBE

A "presentation" is either a video tape cablecast, a live studio cablecast involving more than a single camera and microphone, or a cablecast origination from outside the studio. Your first chance to get a certain, time for your tape or program is on the Monday two weeks ahead of the week containing the time slot you want. Unlike "comments," applications for "presentations" will not stay open until the day of the cablecast, because the cable company must have time to schedule its equipment and personnel around the public programing needs.

COME TO THE PUBLIC CABLE MEETINGS!

There haven't been too many people at Cable Commission meetings lately. Usually just the commission, Media Access Center, and the lawyer for the cable company participate. Community input is needed because all operating rules to guide the public access system in years to come will be figured out in the next few weeks.

The meetings are held every two weeks on Wednesday nights at 7:30 in City Council chambers. The next meeting, on November 22, will be a public hearing on the use of the other three public access channels. FCC regulations suggest one be used for government and one for education. But it's up to people to come to the hearing and give ideas about just what those terms mean and who should be able to run programs on those channels. Discussion of the allocation of the franchise fee and possibilities of giving a second franchise are also coming up.

The SUN will announce when you can apply for public access in future issues.