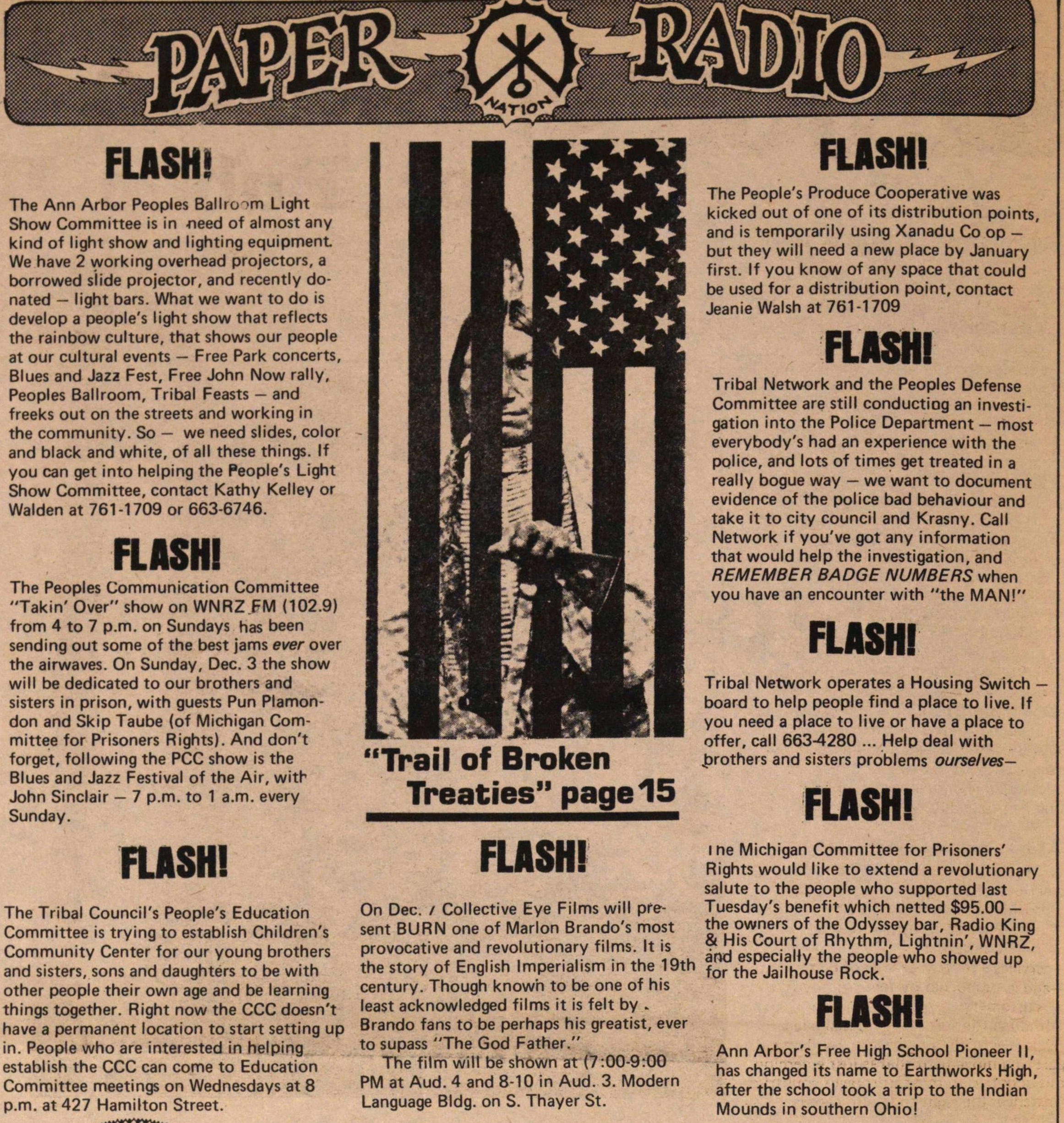 The Ann Arbor Peoples Ballro-m Light Show Committee s n need of almost any kind of light show and lighting equipment We have 2 working overhead projectors, a borrowed slide projector, and recently donated - light bars. What we want to do is develop a people's light show that reflects the rainbow culture, that shows our people at our cultural events - Free Park concerts. Blues and Jazz Fest, Free John Now rally, Peoples Ballroom, Tribal Feasts - and freeks out on the streets and working in the community. So - we need slides, color and black and white, of all these things. If you can get into helping the People's Light Show Committee, contact Kathy Kelley or Walden at 761-1709 or 663-6746. FLASH! The Peoples Communication Committee "Takin' Over" show on WNRZ FM (102.9) f rom 4 to 7 p.m. on Sundays has been sending out some of the best jams ever over the airwaves. On Sunday, Dec. 3 the show will be dedicated to our brothers and sisters in prison, with guests Pun Plamondon and Skip Taube (of Michigan Committee for Prisoners Rights). And don't forget, following the PCC show is the Blues and Jazz Festival of the Air, with John Sinclair - 7 p.m. to 1 a.m. every Sunday. FLASH! The Tribal Council's People's Education Committee is trying to establish Children's Community Center for our young brothers and sisters, sons and daughters to be with other people their own age and be learning things together. Right now the CCC doesn't have a permanent location to start setting up in. People who are interested in helping establish the CCC can come to Education Committee meetings on Wednesdays at 8 p.m. at 427 Hamilton Street. FLASH! On Dec. Collective Eye Films will present BURN one of Marión Brando's most provocative and revolutionary films. It is the story of English Imperialism in the 19th century. Though knowh to be one of his least acknowledged films it is feit by . Brando fans to be perhaps his greatist, ever to supass "The God Father." The film will be shown at (7:00-9:00 PM at Aud. 4 and 8-10 in Aud. 3. Modern Language Bldg. on S. Thayer St. FLASH! The People's Produce Cooperative was kicked out of one of its distribution points, and s temporarily using Xanadu Co op - but they will need a new place by January first. If you know of any space that could be used for a distribution point, contact JeanieWalsh at 761-1709 FLASH! Tribal Network and the Peoples Defense Committee are still conductiog an investígation into the Pólice Department - most everybody's had an experience with the pólice, and lots of times get treated in a really bogue way - we want to document evidence of the pólice bad behaviour and take it to city council and Krasny. Cali Network if you've got any nformation that would help the investigaron, and REMEMBER BADGE NUMBERS when you have an encounter with "the MAN!" FLASH! Tribal Network operates a Housing Switch - board to help people find a place to live. If you need a place to live or have a place to offer, cali 663-4280 ... Help deal with .prothers and sisters problems ourselves- FLASH! I ne Michigan Committee for Prisoners' Rights would like to extend a revolutionary salute to the people who supported last Tuesday's benefit which netted $95.00 - the owners of the Odyssey bar. Radio King & His Court of Rhythm, Lightnin', WNRZ, ánd especially the people wno showed up for the Jailhouse Rock. FLASH! Ann Arbor's Free High School Pioneer II, has changed its name to Earthworks High, after the school took a trip to the Indian Mounds in southern Ohio! 'Trail of Broken Treaties" page 15