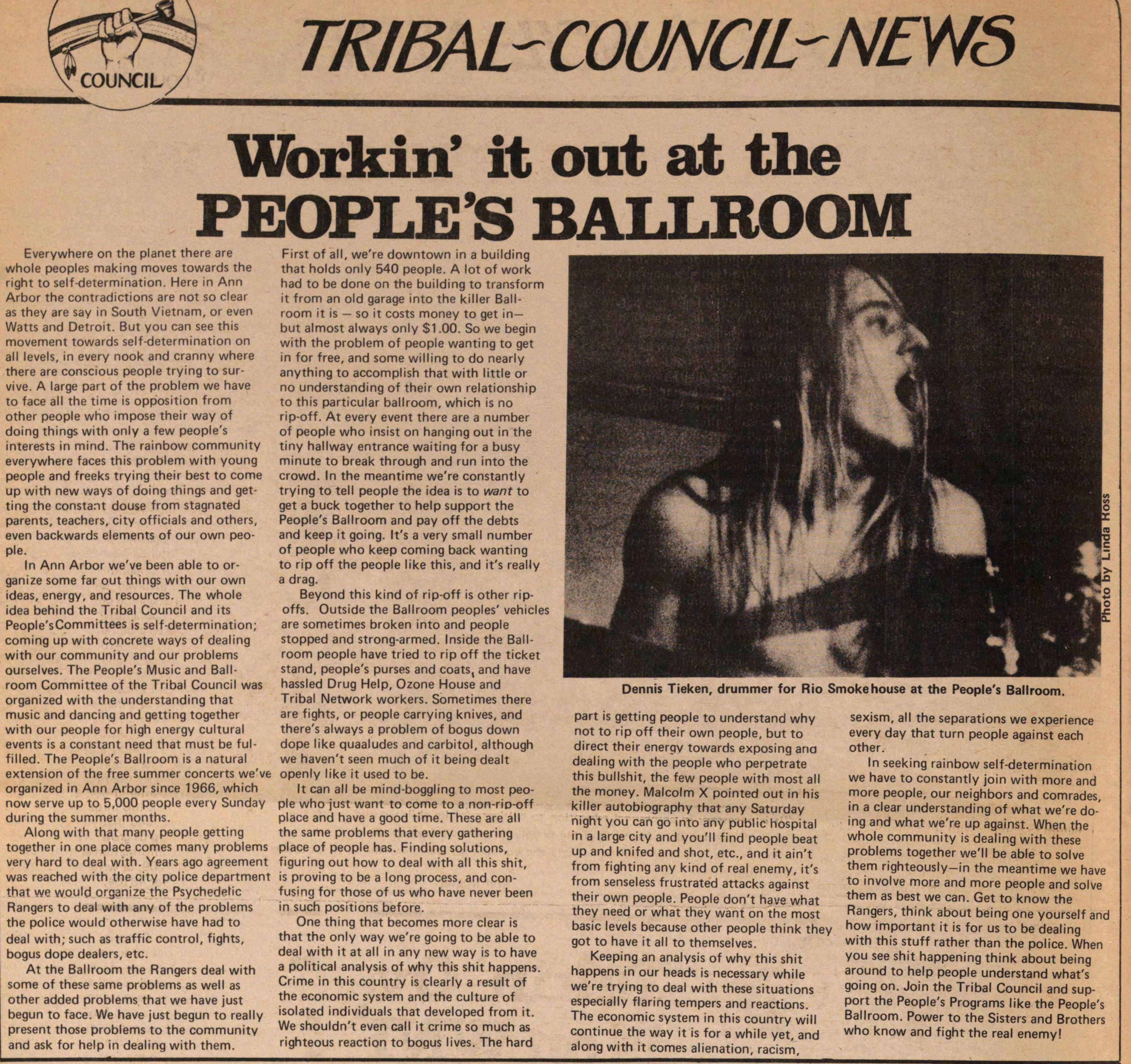 Workin' it out at the

Everywhere on the planet there are whole peoples making moves towards the right to self-determination. Here in Ann Arbor the contradictions are not so clear as they are say in South Vietnam, or even Watts and Detroit. But you can see this movement towards self-determination on all levels, in every nook and cranny where there are conscious people trying to survive. A large part of the problem we have to face all the time is opposition from other people who impose their way of doing things with only a few people's interests in mind. The rainbow community everywhere faces this problem with young people and freeks trying their best to come up with new ways of doing things and getting the constant douse from stagnated parents, teachers, city officials and others, even backwards elements of our own people.

In Ann Arbor we've been able to organize some far out things with our own ideas, energy, and resources. The whole idea behind the Tribal Council and its People's Committees is self-determination; coming up with concrete ways of dealing with our community and our problems ourselves. The People's Music and Ballroom Committee of the Tribal Council was organized with the understanding that music and dancing and getting together with our people for high energy cultural events is a constant need that must be fulfilled. The People's Ballroom is a natural extension of the free summer concerts we've organized in Ann Arbor since 1966, which now serve up to 5,000 people every Sunday during the summer months.

Along with that many people getting together in one place comes many problems very hard to deal with. Years ago agreement was reached with the city police department that we would organize the Psychedelic Rangers to deal with any of the problems the police would otherwise have had to deal with; such as traffic control, fights, bogus dope dealers, etc.

At the Ballroom the Rangers deal with some of these same problems as well as other added problems that we have just begun to face. We have just begun to really present those problems to the community and ask for help in dealing with them. First of all, we're downtown in a building that holds only 540 people. A lot of work had to be done on the building to transform it from an old garage into the killer Ballroom it is - so it costs money to get in- but almost always only $1 .00. So we begin with the problem of people wanting to get in for free, and some willing to do nearly anything to accomplish that with little or no understanding of their own relationship to this particular ballroom, which is no rip-off. At every event there are a number of people who insist on hanging out in the tiny hallway entrance waiting for a busy minute to break through and run into the crowd. In the meantime we're constantly trying to tell people the idea is to want to get a buck together to help support the People's Ballroom and pay off the debts and keep it going. It's a very small number of people who keep coming back wanting to rip off the people like this, and it's really a drag.

Beyond this kind of rip-off is other ripoffs. Outside the Ballroom peoples' vehicles are sometimes broken into and people stopped and strong-armed. Inside the Ballroom people have tried to rip off the ticket stand, people's purses and coats, and have hassled Drug Help, Ozone House and Tribal Network workers. Sometimes there are fights, or people carrying knives, and there's always a problem of bogus down dope like quaaludes and carbitol, although we haven't seen much of it being dealt openly like t used to be.

It can all be mind-boggling to most people who just want to come to a non-rip-off place and have a good time. These are all the same problems that every gathering place of people has. Finding solutions, figuring out how to deal with all this shit, is proving to be a long process, and confusing for those of us who have never been in such positions before.

One thing that becomes more clear is that the only way we're going to be able to deal with it at all in any new way is to have a political analysis of why this shit happens. Crime in this country is clearly a result of the economic system and the culture of isolated individuals that developed from it. We shouldn't even call it crime so much as righteous reaction to bogus lives. The hard part s getting people to understand why not to rip off their own people, but to direct their energy towards exposing and dealing with the people who perpetrate this bullshit, the few people with most all the money. Malcolm X pointed out in his killer autobiography that any Saturday night you can go into any public hospital in a large city and you'll find people beat up and knifed and shot, etc, and it ain't from fighting any kind of real enemy, it's from senseless frustrated attacks against their own people. People don't have what they need or what they want on the most basic levels because other people think they got to have it all to themselves.

Keeping an analysis of why this shit happens in our heads is necessary while we're trying to deal with these situations especially flaring tempers and reactions. The economic system in this country will continue the way it is for a while yet, and along with it comes alienation, racism. sexism, all the separations we experience every day that turn people against each other.

In seeking rainbow self-determination we have to constantly join with more and more people, our neighbors and comrades, in a clear understanding of what we're doing and what we're up against. When the whole community is dealing with these problems together we'll be able to solve them righteously-in the meantime we have to involve more and more people and solve them as best we can. Get to know the Rangers, think about being one yourself and how important it is for us to be dealing with this stuff rather than the police. When you see shit happening think about being around to help people understand what's going on. Join the Tribal Council and support the People's Programs like the People's Ballroom. Power to the Sisters and Brothers who know and fight the real enemy!