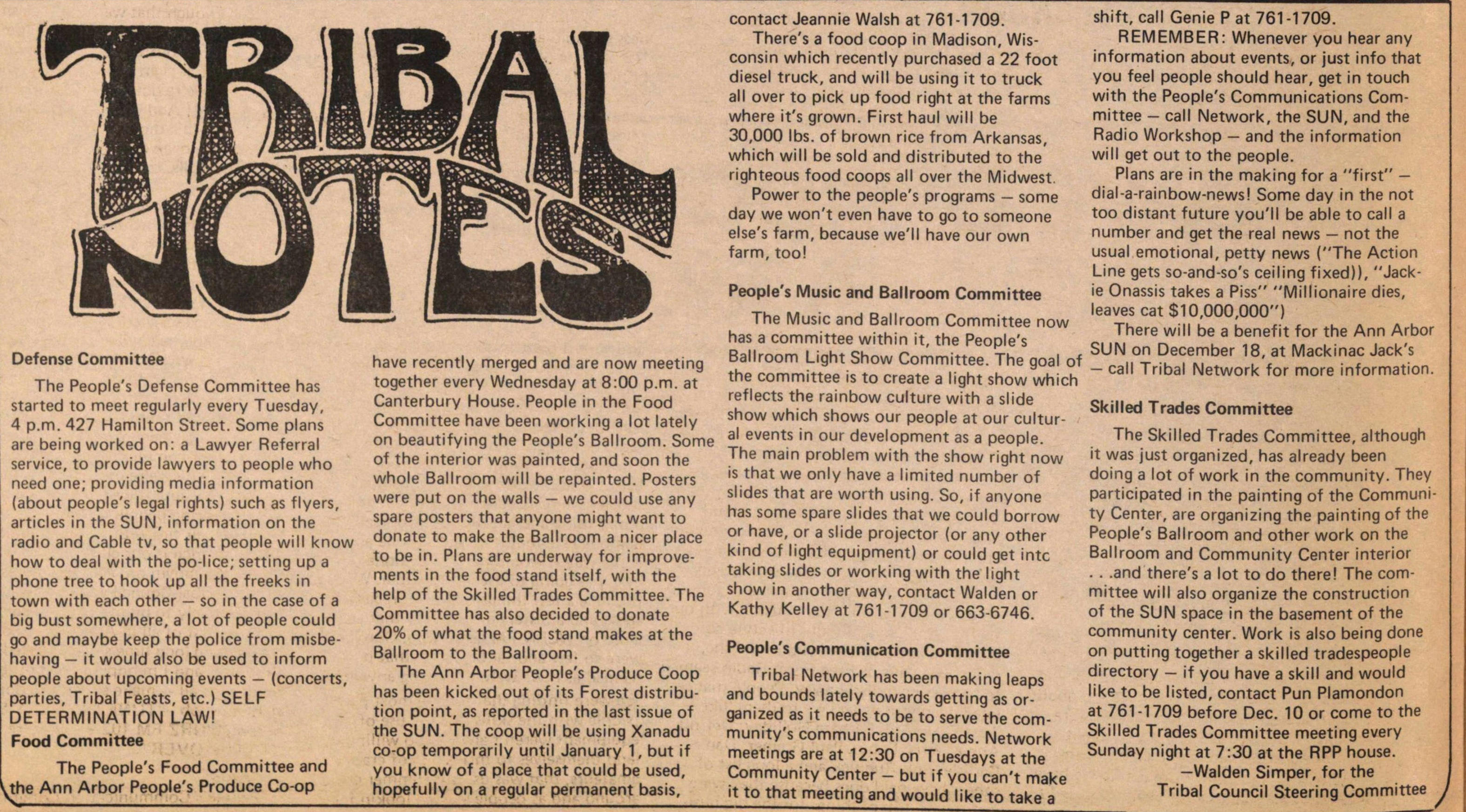 The People's Defense Committee has started to meet regularly every Tuesday, 4 p.m. 427 Hamilton Street. Some plans are being worked on: a Lawyer Referral service, to provide lawyers to people who need one; providing media information (about people's legal rights) such as flyers, articles in the SUN, information on the radio and Cable tv, so that people will know how to deal with the po-lice; setting up a phone tree to hook up all the freeks in town with each other - so in the case of a big bust somewhere, a lot of people could go and maybe keep the police from misbehaving - it would also be used to inform people about upcoming events - (concerts, parties. Tribal Feasts, etc.) SELF DETERMINATION LAW!

The People's Food Committee and the Ann Arbor People's Produce Co-op have recently merged and are now meeting together every Wednesday at 8:00 p.m. at Canterbury House. People in the Food Committee have been working a lot lately on beautifying the People's Ballroom. Some of the interior was painted, and soon the whole Ballroom will be repainted. Posters were put on the walls - we could use any spare posters that anyone might want to donate to make the Ballroom a nicer place to be in. Plans are underway for improvements in the food stand itself, with the help of the Skilled Trades Committee. The Committee has also decided to donate 20% of what the food stand makes at the Ballroom to the Ballroom.

The Ann Arbor People's Produce Coop has been kicked out of its Forest distribution point, as reported in the last issue of the SUN. The coop will be using Xanadu co-op temporarily until January 1, but if you know of a place that could be used, hopefully on a regular permanent basis. contact Jeannie Walsh at 761-1709.

There's a food coop in Madison, Wisconsin which recently purchased a 22 foot diesel truck, and will be using it to truck all over to pick up food right at the farms where it's grown. First haul will be 30,000 lbs. of brown rice from Arkansas, which will be sold and distributed to the righteous food coops all over the Midwest.

Power to the people's programs - some day we won't even have to go to someone else's farm, because we'll have our own farm, too!

The Music and Ballroom Committee now has a committee within it, the People's Ballroom Light Show Committee. The goal of the committee is to create a light show which reflects the rainbow culture with a slide show which shows our people at our cultural events in our development as a people. The main problem with the show right now is that we only have a limited number of slides that are worth using. So, if anyone has some spare slides that we could borrow or have, or a slide projector (or any other kind of light equipment) or could get into taking slides or working with the light show in another way, contact Walden or Kathy Kelley at 761-1709 or 663-6746.

Tribal Network has been making leaps and bounds lately towards getting as organized as it needs to be to serve the community's communications needs. Network meetings are at 12:30 on Tuesdays at the Community Center - but if you can't make it to that meeting and would like to take a shift, call Genie P at 761-1709.

REMEMBER: Whenever you hear any information about events, or just info that you feel people should hear, get in touch with the People's Communications Committee - call Network, the SUN, and the Radio Workshop - and the information will get out to the people.

Plans are in the making for a "first" - dial-a-rainbow-news! Some day in the not too distant future you'll be able to call a number and get the real news - not the usual emotional, petty news ("The Action Line gets so-and-so's ceiling fixed)), "Jackie Onassis takes a Piss" "Millionaire dies, leaves cat $10,000,000")

There will be a benefit for the Ann Arbor SUN on December 18, at Mackinac Jack's - call Tribal Network for more information.

The Skilled Trades Committee, although it was just organized, has already been doing a lot of work in the community. They participated in the painting of the Community Center, are organizing the painting of the People's Ballroom and other work on the Ballroom and Community Center interior . . .and there's a lot to do there! The committee will also organize the construction of the SUN space in the basement of the community center. Work is also being done on putting together a skilled tradespeople directory - if you have a skill and would like to be listed, contact Pun Plamondon at 761-1709 before Dec. 10 or come to the Skilled Trades Committee meeting every Sunday night at 7:30 at the RPP house.