"takin' Over" Is On Wnrz 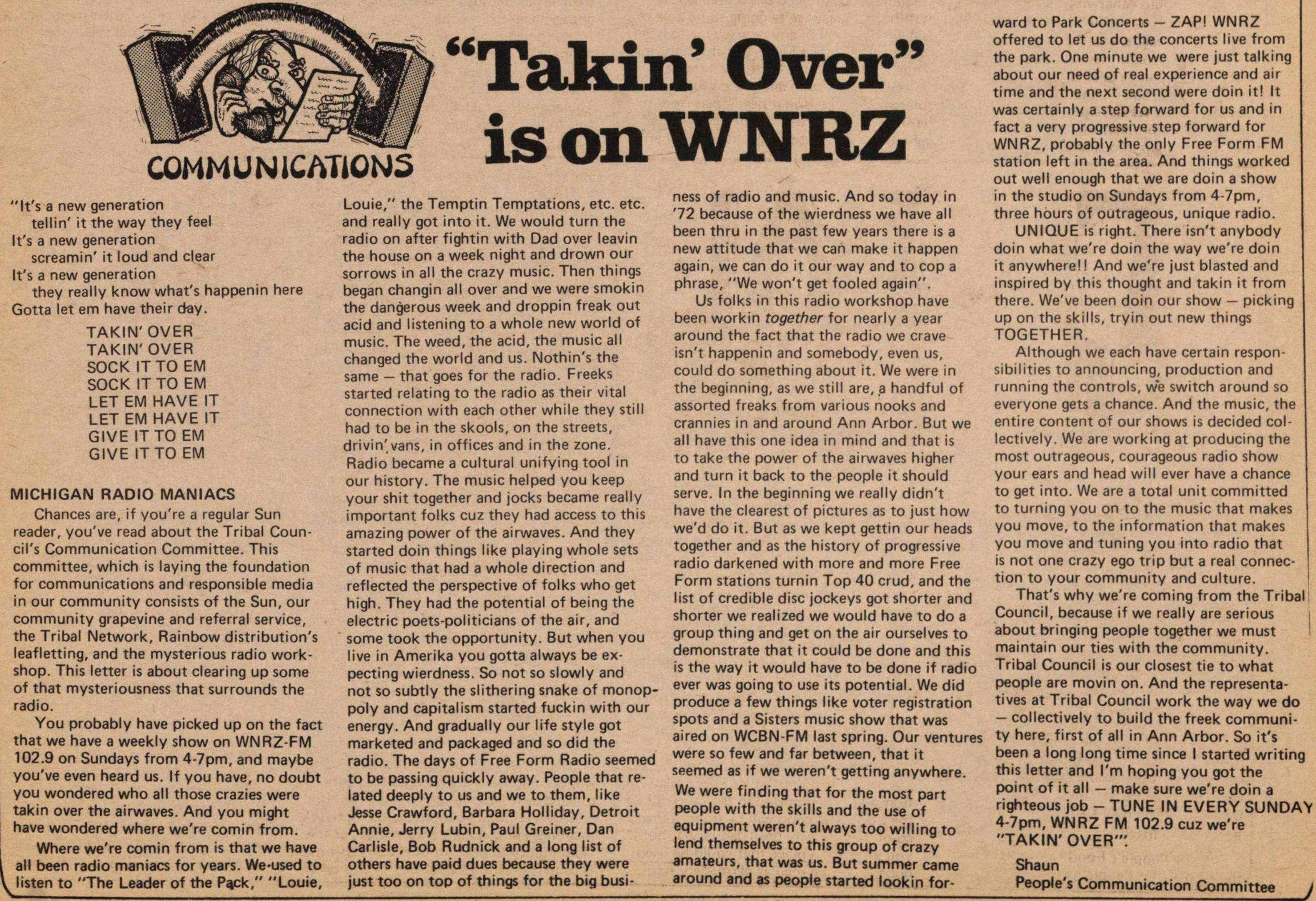 "Takin' Over" is on WNRZ

"It's a new generation tellin' it the way they feel

It's a new generation screamin' it loud and clear

It's a new generation they really know what's happenin here

Gotta let em have their day.

SOCK IT TO EM

SOCK IT TO EM

LET EM HAVE IT

LET EM HAVE IT

GIVE IT TO EM

GIVE IT TO EM

Chances are, if you're a regular Sun reader, you've read about the Tribal Council's Communication Committee. This committee, which is laying the foundation for Communications and responsible media in our community consists of the Sun, our community grapevine and referral service, the Tribal Network, Rainbow distribution's leafletting, and the mysterious radio workshop. This letter is about clearing up some of that mysteriousness that surrounds the radio.

You probably have picked up on the fact that we have a weekly show on WNRZ-FM 102.9 on Sundays from 4-7pm, and maybe you've even heard us. If you have, no doubt you wondered who all those crazies were takin over the airwaves. And you might have wondered where we're comin from.

Where we're comin from is that we have all been radio maniacs for years. We used to listen to "The Leader of the Pack," "Louie, Louie," the Temptin Temptations, etc. etc. and really got into it. We would turn the radio on after fightin with Dad over leavin the house on a week night and drown our sorrows in all the crazy music. Then things began changin all over and we were smokin the dangerous week and droppin freak out acid and listening to a whole new world of music. The weed, the acid, the music all changed the world and us. Nothin's the same - that goes for the radio. Freeks started relating to the radio as their vital connection with each other while they still had to be in the skools, on the streets, drivin' vans, in offices and in the zone. Radio became a cultural unifying tool in our history. The music helped you keep your shit together and jocks became really important folks cuz they had access to this amazing power of the airwaves. And they started doin things like playing whole sets of music that had a whole direction and reflected the perspective of folks who get high. They had the potential of being the electric poets-politicians of the air, and some took the opportunity. But when you live in Amerika you gotta always be expecting wierdness. So not so slowly and not so subtly the slithering snake of monopoly and capitalism started fuckin with our energy. And gradually our life style got marketed and packaged and so did the radio. The days of Free Form Radio seemed to be passing quickly away. People that related deeply to us and we to them, like Jesse Crawford, Barbara Holliday, Detroit Annie, Jerry Lubin, Paul Greiner, Dan Carlisle, Bob Rudnick and a long list of others have paid dues because they were just too on top of things for the big business of radio and music. And so today in '72 because of the wierdness we have all been thru in the past few years there is a new attitude that we can make it happen again, we can do it our way and to cop a phrase, "We won't get fooled again".

Us folks in this radio workshop have been workin together for nearly a year around the fact that the radio we crave isn't happenin and somebody, even us, could do something about it. We were in the beginning, as we still are, a handful of assorted freaks from various nooks and crannies in and around Ann Arbor. But we all have this one idea in mind and that is to take the power of the airwaves higher and turn it back to the people it should serve. In the beginning we really didn't have the clearest of pictures as to just how we'd do it. But as we kept gettin our heads together and as the history of progressive radio darkened with more and more Free Form stations turnin Top 40 crud, and the list of credible disc jockeys got shorter and shorter we realized we would have to do a group thing and get on the air ourselves to demonstrate that it could be done and this is the way t would have to be done if radio ever was going to use its potential. We did produce a few things like voter registration spots and a Sisters music show that was aired on WCBN-FM last spring. Our ventures were so few and far between, that it seemed as if we weren't getting anywhere.

We were finding that for the most part people with the skills and the use of equipment weren't always too willing to lend themselves to this group of crazy amateurs, that was us. But summer carne around and as people started lookin forward to Park Concerts - ZAP! WNRZ offered to let us do the concerts live from the park. One minute we were just talking about our need of real experience and air time and the next second were doin it! It was certainly a step forward for us and in fact a very progressive step forward for WNRZ, probably the only Free Form FM station left in the area. And things worked out well enough that we are doin a show in the studio on Sundays from 4-7pm, three hours of outrageous, unique radio.

UNIQUE is right. There isn't anybody doin what we're doin the way we're doin it anywhere!! And we're just blasted and inspired by this thought and takin it from there. We've been doin our show - picking up on the skilIs, tryin out new things TOGETHER.

Although we each have certain responsibilities to announcing, production and running the controls, we switch around so everyone gets a chance. And the music, the entire content of our shows is decided collectively. We are working at producing the most outrageous, courageous radio show your ears and head will ever have a chance to get into. We are a total unit committed to turning you on to the music that makes you move, to the information that makes you move and tuning you into radio that is not one crazy ego trip but a real connection to your community and culture.

That's why we're coming from the Tribal Council, because if we really are serious about bringing people together we must maintain our ties with the community. Tribal Council is our closest tie to what people are movin on. And the representatives at Tribal Council work the way we do - collectively to build the freek community here, first of all in Ann Arbor. So it's been a long long time since I started writing this letter and I'm hoping you got the point of it all - make sure we're doin a righteous job - TUNE IN EVERY SUNDAY 4-7pm, WNRZ FM 102.9 cuz we're "TAKIN' OVER'".