'ten For Two' Comes To The Screen! 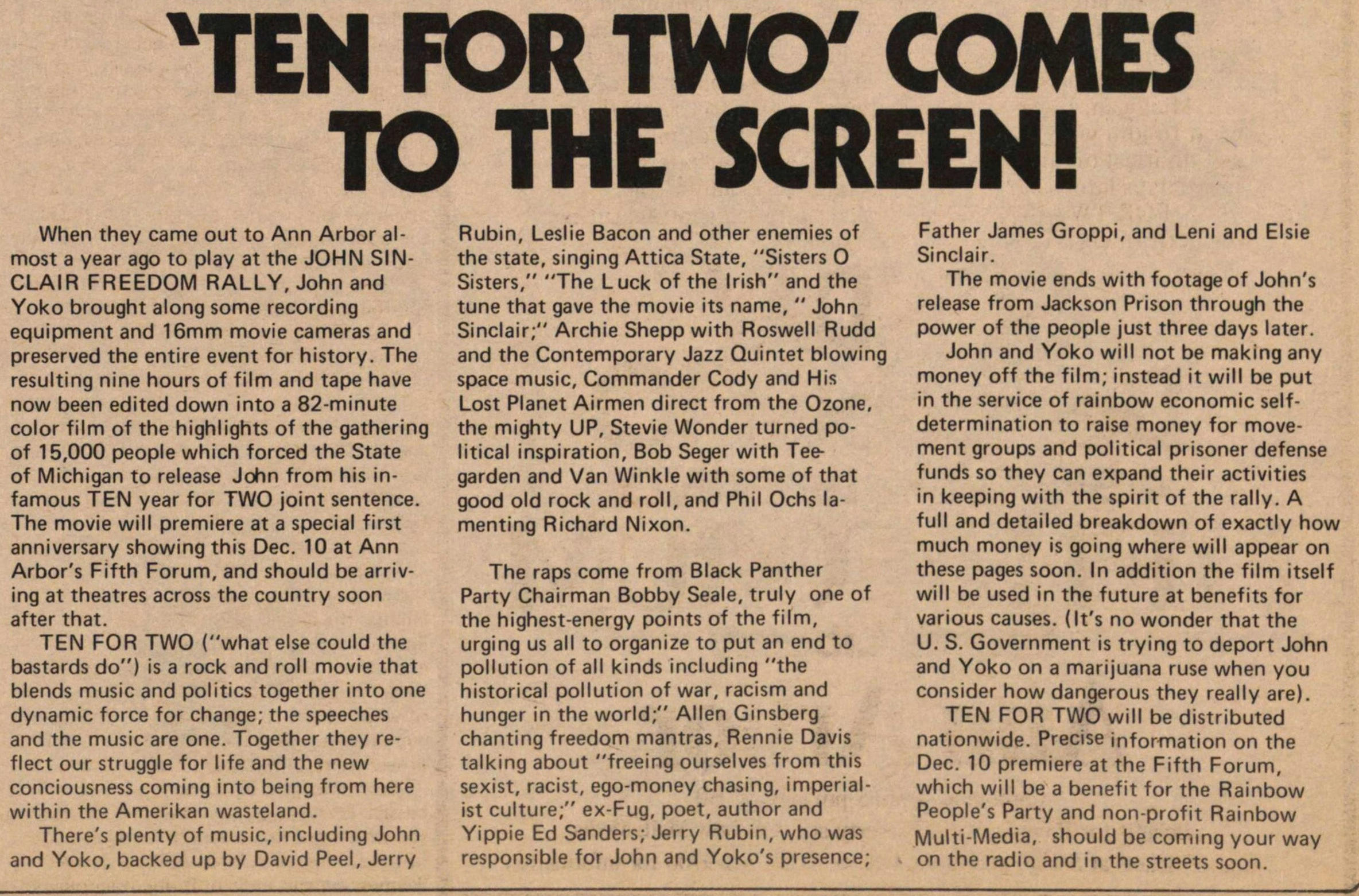 'TEN FOR TWO' COMES TO THE SCREEN!

When they carne out to Ann Arbor almost a year ago to play at the JOHN SINCLAIR FREEDOM RALLY, John and Yoko brought along some recording equipment and 16mm movie cameras and preserved the entire event for history. The resulting nine hours of film and tape have now been edited down into a 82 -minute color film of the highlights of the gathering of 15,000 people which forced the State of Michigan to release John from his infamous TEN year for TWO joint sentence. The movie will premiere at a special first anniversary showing this Dec. 10 at Ann Arbor's Fifth Forum, and should be arriving at theatres across the country soon after that.

TEN FOR TWO ("what else could the bastards do") is a rock and roll movie that blends music and politics together into one dynamic force for change; the speeches and the music are one. Together they reflect our struggle for life and the new consciousness coming into being from here within the Amerikan wasteland.

There's plenty of music, including John and Yoko, backed up by David Peel, Jerry Rubin, Leslie Bacon and other enemies of the state, singing Attica State, "Sisters O Sisters," "The Luck of the Irish" and the tune that gave the movie its name, "John Sinclair;" Archie Shepp with Roswell Rudd and the Contemporary Jazz Quintet blowing space music, Commander Cody and His Lost Planet Airmen direct from the Ozone, the mighty UP, Stevie Wonder turned political inspiration. Bob Seger with Teegarden and Van Winkle with some of that good old rock and roll, and Phil Ochs lamenting Richard Nixon.

The raps come from Black Panther Party Chairman Bobby Seale, truly one of the highest-energy points of the film, urging us all to organize to put an end to pollution of all kinds including "the historical pollution of war, racism and hunger in the world;" Allen Ginsberg chanting freedom mantras, Rennie Davis talking about "freeing ourselves from this sexist, racist, ego-money chasing, imperialist culture;" ex-Fug, poet, author and Yippie Ed Sanders; Jerry Rubin, who was responsible for John and Yoko's presence; Father James Groppi, and Leni and Elsie Sinclair.

The movie ends with footage of John's release from Jackson Prison through the power of the people just three days later.

John and Yoko will not be making any money off the film; instead it will be put in the service of rainbow economic self-determination to raise money for movement groups and political prisoner defense funds so they can expand their activities in keeping with the spirit of the rally. A full and detailed breakdown of exactly how much money is going where will appear on these pages soon. In addition the film itself will be used in the future at benefits for various causes. (It's no wonder that the U. S. Government is trying to deport John and Yoko on a marijuana ruse when you consider how dangerous they really are).

TEN FOR TWO will be distributed nationwide. Precise information on the Dec. 10 premiere at the Fifth Forum, which will be a benefit for the Rainbow People's Party and non-profit Rainbow Multi-Media, should be coming your way on the radio and in the streets soon.