"my Talent Belongs To The People!" 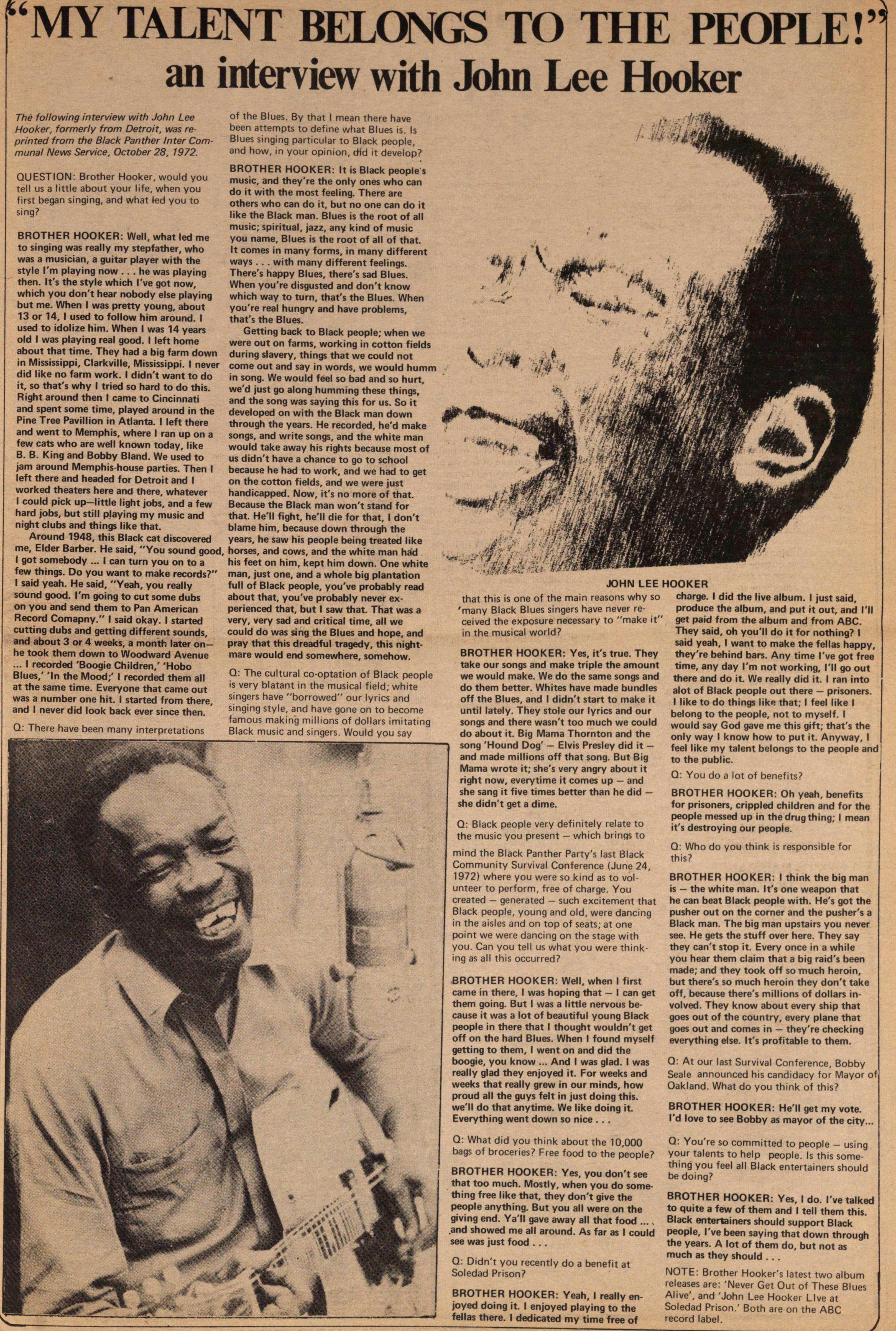 "MY TALENT BELONGS TO THE PEOPLE!"

an interview with John Lee Hooker

QUESTION: Brother Hooker, would you tell us a little about your life, when you first began singing, and what led you to sing?

BROTHER HOOKER: Well, what led me to singing was really my stepfather, who was a musician, a guitar player with the style I'm playing now . . . he was playing then. It's the style which I've got now, which you don't hear nobody else playing but me. When I was pretty young, about 13 or 14, I used to follow him around. I used to idolize him. When I was 14 years old I was playing real good. I left home about that time. They had a big farm down in Mississippi, Clarkville, Mississippi. I never did like no farm work. I didn't want to do it, so that's why I tried so hard to do this. Right around then I carne to Cincinnati and spent some time, played around in the Pine Tree Pavillion in Atlanta. I left there and went to Memphis, where I ran up on a few cats who are well known today, like B. B. King and Bobby Bland. We used to jam around Memphis house parties. Then I left there and headed for Detroit and I worked theaters here and there, whatever I could pick up-little light jobs, and a few hard jobs, but still playing my music and night clubs and things like that.

Around 1948, this Black cat discovered me. Elder Barber. He said, "You sound good, I got somebody ... I can turn you on to a few things. Do you want to make records?" I said yeah. He said, "Yeah, you really sound good. I'm going to cut some dubs on you and send them to Pan American Record Company." I said okay. I started cutting dubs and getting different sounds, and about 3 or 4 weeks, a month later on-he took them down to Woodward Avenue ... I recorded 'Boogie Children,' 'Hobo Blues,' 'In the Mood;' I recorded them all at the same time. Everyone that carne out was a number one hit. I started from there, and I never did look back ever since then.

Q: There have been many interpretations of the Blues. By that I mean there have been attempts to define what Blues is. Is Blues singing particular to Black people, and how, in your opinion, did it develop?

BROTHER HOOKER: It is Black people s music, and they're the only ones who can do it with the most feeling. There are others who can do it, but no one can do it like the Black man. Blues is the root of all music; spiritual, jazz, any kind of music you name. Blues is the root of all of that. It comes in many forms, in many different ways . . . with many different feelings. There's happy Blues, there's sad Blues. When you're disgusted and don't know which way to turn, that's the Blues. When you're real hungry and have problems, that's the Blues.

Getting back to Black people; when we were out on farms, working in cotton fields during slavery, things that we could not come out and say in words, we would humm in song. We would feel so bad and so hurt, we'd just go along humming these things, and the song was saying this for us. So it developed on with the Black man down through the years. He recorded, he'd make songs, and write songs, and the white man would take away his rights because most of us didn't have a chance to go to school because he had to work, and we had to get on the cotton fields, and we were just handicapped. Now, it's no more of that. Because the Black man won't stand for that. He'll fight, he'll die for that, I don't blame him, because down through the years, he saw his people being treated like horses, and cows, and the white man had his feet on him, kept him down. One white man, just one, and a whole big plantation full of Black people, you've probably read about that, you've probably never experienced that, but I saw that. That was a very, very sad and critical time, all we could do was sing the Blues and hope, and pray that this dreadful tragedy, this nightmare would end somewhere, somehow.

Q: The cultural co-optation of Black people is very blatant in the musical field; white singers have "borrowed" our lyrics and singing style, and have gone on to become famous making millions of dollars imitating Black music and singers. Would you say that this is one of the main reasons why so many Black Blues singers have never received the exposure necessary to "make it" in the musical world?

BROTHER HOOKER: Yes, it's true. They take our songs and make triple the amount we would make. We do the same songs and do them better. Whites have made bundles off the Blues, and I didn't start to make it until lately. They stole our lyrics and our songs and there wasn't too much we could do about it. Big Mama Thornton and the song 'Hound Dog' - Elvis Presley did it - and made millions off that song. But Big Mama wrote it; she's very angry about it right now, every time it comes up - and she sang it five times better than he did - she didn't get a dime.

Q: Black people very definitely relate to the music you present - which brings to mind the Black Panther Party's last Black Community Survival Conference (June 24, 1972) where you were so kind as to volunteer to perform, free of charge. You created - generated - such excitement that Black people, young and old, were dancing in the aisles and on top of seats; at one point we were dancing on the stage with you. Can you tell us what you were thinking as all this occurred?

BROTHER HOOKER: Well, when I first came in there, I was hoping that-I can get them going. But I was a little nervous because it was a lot of beautiful young Black people in there that I thought wouldn't get off on the hard Blues. When I found myself getting to them, I went on and did the boogie, you know ... And I was glad. I was really glad they enjoyed it. For weeks and weeks that really grew in our minds, how proud all the guys felt in just doing this. we'll do that anytime. We like doing it. Everything went down so nice . . .

Q: What did you think about the 10,000 bags of groceries? Free food to the people?

BROTHER HOOKER: Yes, you don't see that too much. Mostly, when you do something free like that, they don't give the people anything. But you all were on the giving end. Y'all gave away all that food and showed me all around. As far as I could see was just food . . .

Q: Didn't you recently do a benefit at Soledad Prison?

BROTHER HOOKER: Yeah, I really enjoyed doing it. I enjoyed playing to the fellas there. I dedicated my time free of charge. I did the live album. I just said, produce the album, and put it out, and I 'II get paid from the album and from ABC. They said, oh you'll do it for nothing? I said yeah, I want to make the fellas happy, they're behind bars. Any time I've got free time, any day I'm not working, I'll go out there and do it. We really did it. I ran into a lot of Black people out there - prisoners. I like to do things like that; I feel like I belong to the people, not to myself. I would say God gave me this gift; that's the only way I know how to put it. Anyway, I feel like my talent belongs to the people and to the public.

Q: You do a lot of benefits?

BROTHER HOOKER: Oh yeah, benefits for prisoners, crippled children and for the people messed up in the drug thing; I mean it's destroying our people.

Q: Who do you think is responsible for this?

BROTHER HOOKER: I think the big man is-the white man. It's one weapon that he can beat Black people with. He's got the pusher out on the corner and the pusher's a Black man. The big man upstairs you never see. He gets the stuff over here. They say they can't stop it. Every once in a while you hear them claim that a big raid's been made; and they took off so much heroin, but there's so much heroin they don't take off, because there's millions of dollars involved. They know about every ship that goes out of the country, every plane that goes out and comes in-they're checking everything else. It's profitable to them.

Q: At our last Survival Conference, Bobby Seale announced his candidacy for Mayor of Oakland. What do you think of this?

BROTHER HOOKER: He'll get my vote, I'd love to see Bobby as mayor of the city...

Q: You're so committed to people-using your talents to help people. Is this something you feel all Black entertainers should be doing?

BROTHER HOOKER: Yes, I do. I've talked to quite a few of them and I tell them this. Black entertainers should support Black people, I've been saying that down through the years. A lot of them do, but not as much as they should...

NOTE: Brother Hooker's latest two album releases are: 'Never Get Out of These Blues Alive', and 'John Lee Hooker Live at Soledad Prison.' Both are on the ABC record label.