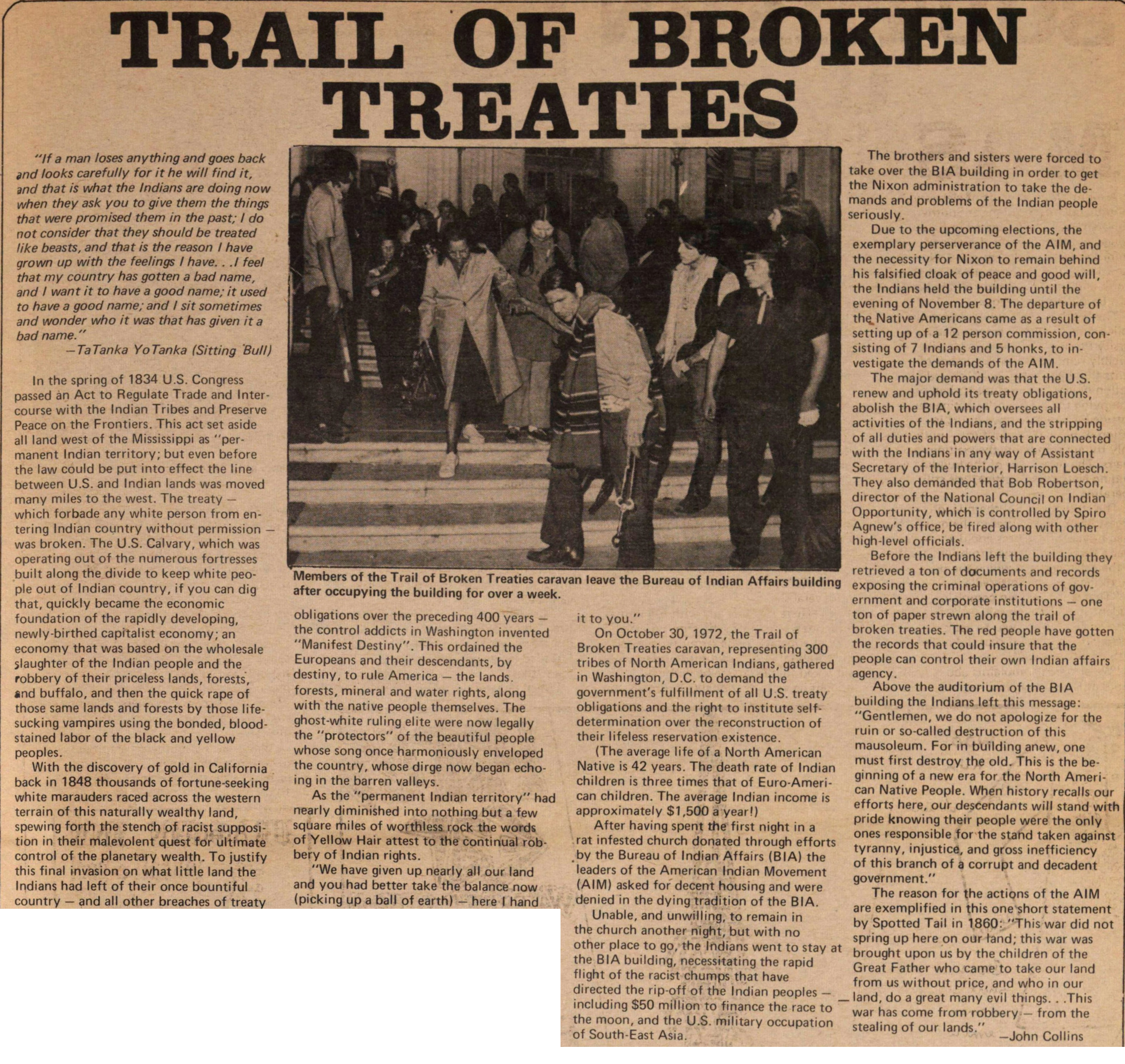 "If a man loses anything and goes back and looks carefully for it he will find it, and that is what the Indians are doing now when they ask you to give them the things that were promised them in the past; I do not consider that they should be treated like beasts, and that s the reason I have grown up with the feelings I have. . .I feel that my country has gotten a bad name, and I want it to have a good name; it used to have a good name; and I sit sometimes and wonder who it was that has given it a bad name. " -TaTanka YoTanka (Sitting Bull)

In the spring of 1834 U.S. Congress passed an Act to Regulate Trade and Intercourse with the Indian Tribes and Preserve Peace on the Frontiers. This act set aside all land west of the Mississippi as "permanent Indian territory; but even before the law could be put into effect the line between U.S. and Indian lands was moved many miles to the west. The treaty - which forbade any white person from entering Indian country without permission - was broken. The U.S. Calvary, which was operating out of the numerous fortresses built along the divide to keep white people out of Indian country, if you can dig that, quickly became the economic foundation of the rapidly developing, newly-birthed capitalist economy; an economy that was based on the wholesale slaughter of the Indian people and the robbery of their priceless lands, forests, and buffalo, and then the quick rape of those same lands and forests by those lifesucking vampires using the bonded, bloodstained labor of the black and yellow peoples.

With the discovery of gold in California back in 1848 thousands of fortune-seeking white marauders raced across the western terrain of this naturally wealthy land, spewing forth the stench of racist supposition in their malevolent quest for ultimate control of the planetary wealth. To justify this final invasion on what little land the Indians had left of their once bountiful country - and all other breaches of treaty obligations over the preceding 400 years - the control addicts in Washington invented "Manifest Destiny". This ordained the Europeans and their descendants, by destiny, to rule America - the lands. forests, mineral and water rights, along with the native people themselves. The ghost-white ruling elite were now legally the "protectors" of the beautiful people whose song once harmoniously enveloped the country, whose dirge now began echoing in the barren valleys.

As the "permanent Indian territory" had nearly diminished into nothing but a few square miles of worthless rock the words of Yellow Hair attest to the continual robbery of Indian rights.

"We have given up nearly all our land and you had better take the balance now (picking up a ball of earth) - here I hand it to you." On October 30, 1972, the Trail of Broken Treaties caravan, representing 300 tribes of North American Indians, gathered in Washington, D.C. to demand the government's fulfillment of all U.S. treaty obligations and the right to institute self-determination over the reconstruction of their lifeless reservation existence.

(The average life of a North American Native s 42 years. The death rate of Indian children is three times that of Euro-American children. The average Indian income is approximately $1,500 a year!)

After having spent the first night in a rat infested church donated through efforts .by the Bureau of Indian Affairs (BIA) the leaders of the American Indian Movement (AIM) asked for decent housing and were denied in the dying tradition of the BIA.

Unable, and unwilling, to remain in the church another night, but with no other place to go, the Indians went to stay at the BIA building, necessitating the rapid flight of the racist chumps that have directed the ripoff of the Indian peoples - including $50 million to finance the race to the moon, and the U.S. military occupation of South-East Asia.

The brothers and sisters were forced to take over the BIA building in order to get the Nixon administration to take the demands and problems of the Indian people seriously.

Due to the upcoming elections, the exemplary perserverance of the AIM, and the necessity for Nixon to remain behind his falsified cloak of peace and good will, the Indians held the building until the evening of November 8. The departure of the, Native Americans came as a result of setting up of a 12 person commission, consisting of 7 Indians and 5 honks, to investigate the demands of the AIM.

The major demand was that the U.S. renew and uphold its treaty obligations, abolish the BIA, which oversees all activities of the Indians, and the stripping of all duties and powers that are connected with the Indians in any way of Assistant Secretary of the Interior, Harrison Loesch. They also demanded that Bob Robertson, director of the National Council on Indian Opportunity, which is controlled by Spiro Agnew's office, be fired along with other high-level officials.

Before the Indians left the building they retrieved a ton of documents and records exposing the criminal operations of government and corporate institutions - one ton of paper strewn along the trail of broken treaties. The red people have gotten the records that could insure that the people can control their own Indian affairs agency.

Above the auditorium of the BIA building the Indians left this message: "Gentlemen, we do not apologize for the ruin or so-called destruction of this mausoleum. For in building anew, one must first destroy the old. This is the beginning of a new era for the North American Native People. When history recalls our efforts here, our descendants will stand with pride knowing their people were the only ones responsible for the stand taken against tyranny, injustice, and gross inefficiency of this branch of a corrupt and decadent government."

The reason for the actions of the AIM are exemplified in this one short statement by Spotted Tail in 1860: "This war did not spring up here on our land; this war was brought upon us by the children of the Great Father who came to take our land from us without price, and who in our land, do a great many evil things. . .This war has come from robbery- from the stealing of our lands."

Members of the Trail of Broken Treaties caravan leave the Bureau of Indian Affairs building after occupying the building for over a week.