Atlantic Offers A 6 Credit Course In The Blues 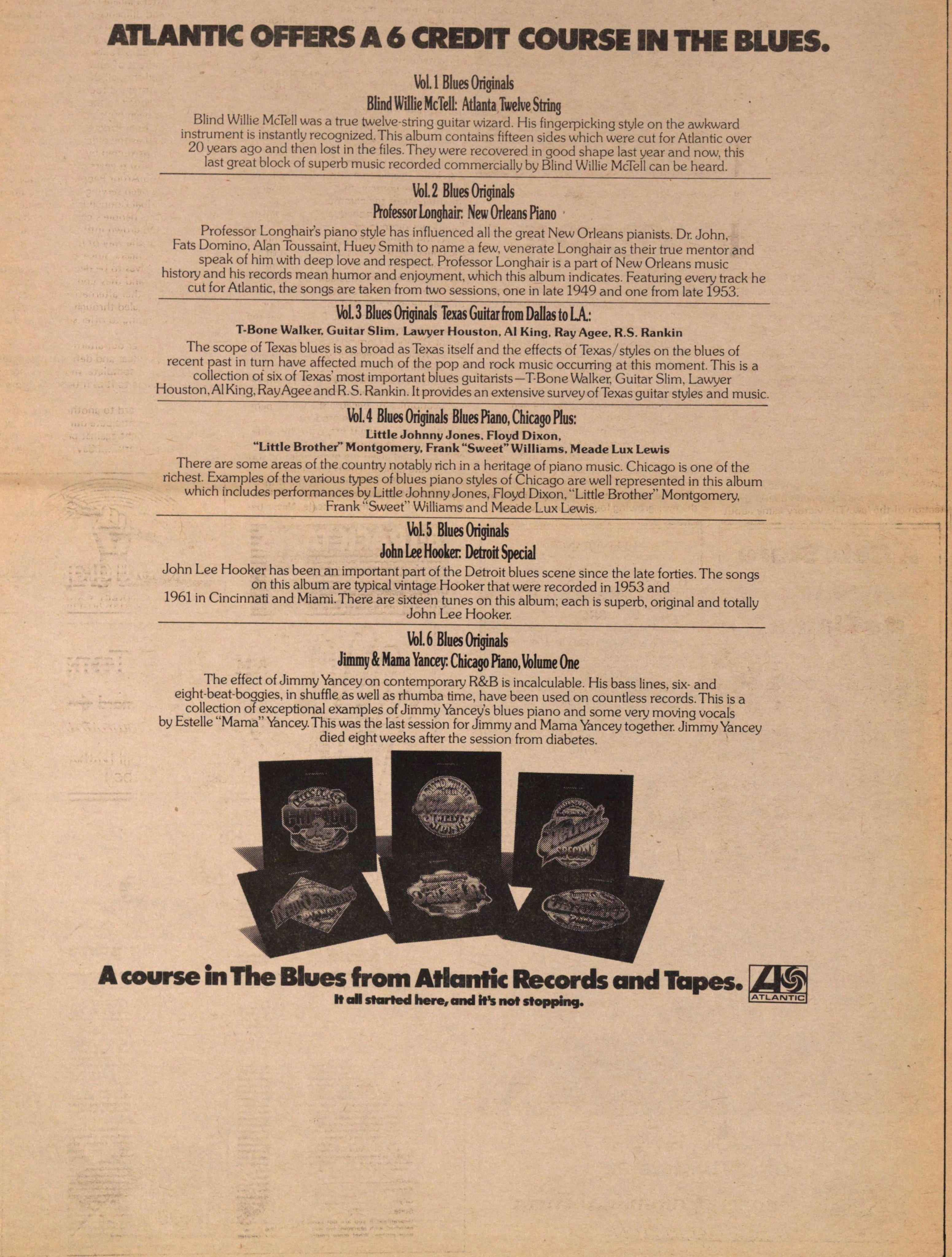 Blind Willie McTell was a true twelve-string guitar wizard. His fingerpicking style on the awkward instrument is instantly recognized. This album contains fifteen sides which were cut for Atlantic over 20 years ago and then lost in the files. They were recovered in good shape last year and now, this last great block of superb music recorded commercially by Blind Willie McTell can be heard.

Professor Longhair's piano style has influenced all the great New Orleans pianists. Dr. John, Fats Domino, Alan Toussaint, Huey Smith to name a few, venerate Longhair as their true mentor and speak of him with deep love and respect. Professor Longhair is a part of New Orleans music history and his records mean humor and enjoyment, which this album indicates. Featuring every track he cut for Atlantic, the songs are taken from two sessions, one in late 1949 and one from late 1953.

The scope of Texas blues is as broad as Texas itself and the effects of Texas styles on the blues of recent past in turn have affected much of the pop and rock music occurring at this moment. This is a collection of six of Texas' most important blues guitarists - T-Bone Walker, Guitar Slim, Lawyer Houston, Al King, Ray Agee, and R. S. Rankin. It provides an extensive survey of Texas guitar styles and music.

There are some areas of the country notably rich in a heritage of piano music. Chicago is one of the richest. Examples of the various types of blues piano styles of Chicago are well represented in this album which includes performances by Little Johnny Jones, Floyd Dixon, "Little Brother" Montgomery, Frank "Sweet" Williams, and Meade Lux Lewis.

Detroit Special John Lee Hooker has been an important part of the Detroit blues scene since the late forties. The songs on this album are typical vintage Hooker that were recorded in 1953 and 1961 in Cincinnati and Miami. There are sixteen tunes on this album; each is superb, original, and totally John Lee Hooker.

The effect of Jimmy Yancey on contemporary R&B is incalculable. His bass lines, and eight-beat-boggies, in shuffle as well as rhumba time, have been used on countless records. This is a collection of exceptional examples of Jimmy Yancey's blues piano and some very moving vocals by Estelle ' Mama ' Yancey. This was the last session for Jimmy and Mama Yancey together. Jimmy Yancey died eight weeks after the session from diabetes. A course in The Blues from Atlantic Records and Tapes. It all started here, and it's not stopping.