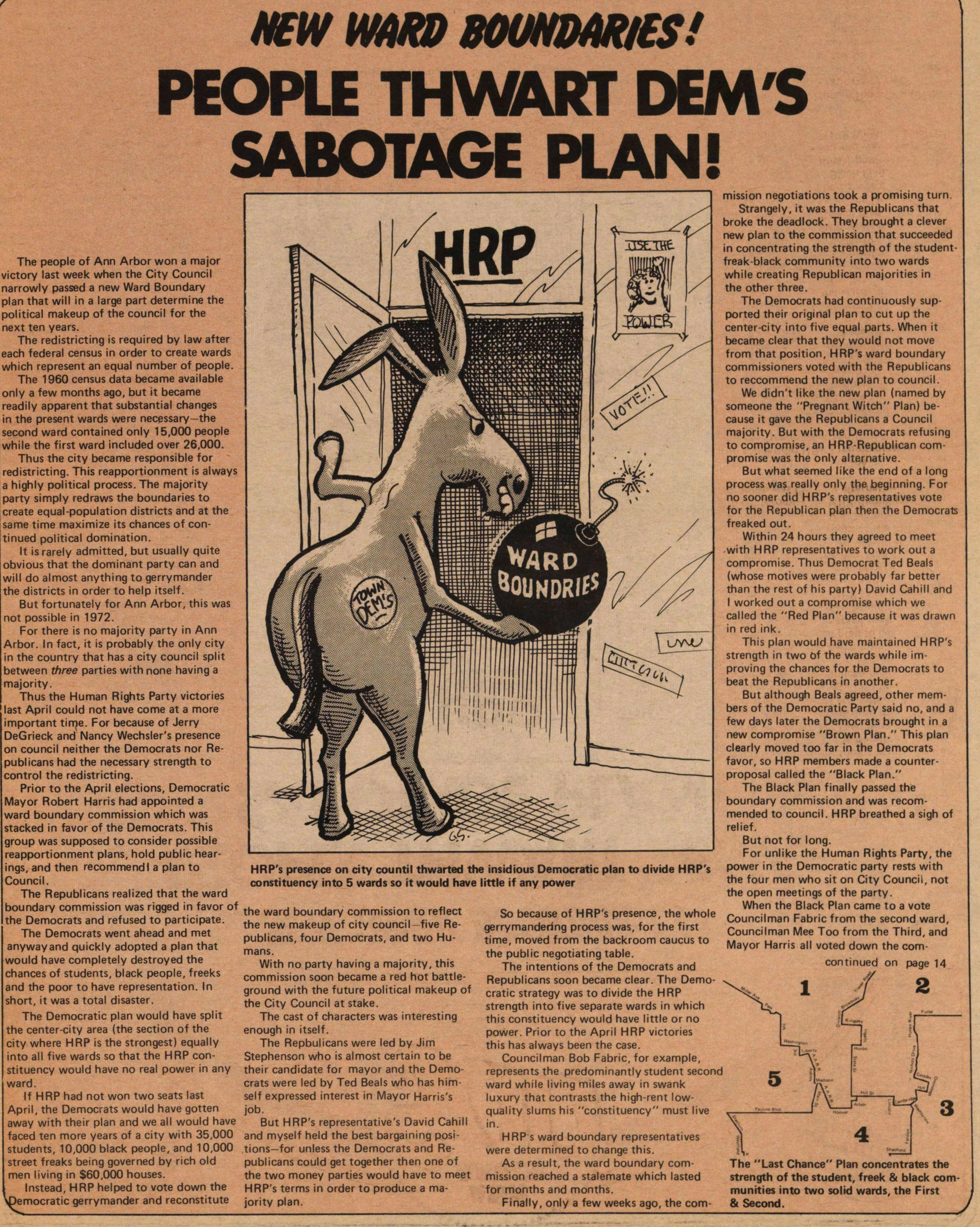 The people of Ann Arbor won a major victory last week when the City Council narrowly passed a new Ward Boundary plan that will In a large part determine the political makeup of the council for the next ten years.

The redistricting is required by law after each federal census in order to create wards which represent an equal number of people.

The 1960 census data became available only a few months ago, but it became readily apparent that substantial changes in the present wards were necessary--the second ward contained only 15,000 people while the first ward included over 26,000.

Thus the city became responsible for redistricting. This reapportionment is always a highly political process. The majority party simply redraws the boundaries to create equal-population districts and at the same time maximize its chances of continued political domination.

It is rarely admitted, but usually quite obvious that the dominant party can and will do almost anything to gerrymander the districts in order to help itself.

But fortunately for Ann Arbor, this was not possible in 1972.

For there is no majority party in Ann Arbor. In fact, it is probably the only city in the country that has a city council split between three parties with none having a majority.

Thus the Human Rights Party victories last April could not have come at a more important time. For because of Jerry DeGrieck and Nancy Wechsler's presence on council neither the Democrats nor Republicans had the necessary strength to control the redistricting.

Prior to the April elections, Democratic Mayor Robert Harris had appointed a ward boundary commission which was stacked in favor of the Democrats. This group was supposed to consider possible reapportionment plans, hold public hearings, and then recommend a plan to Council.

The Republicans realized that the ward boundary commission was rigged in favor of the Democrats and refused to participate.

The Democrats went ahead and met anyway and quickly adopted a plan that would have completely destroyed the chances of students, black people, freeks and the poor to have representation. In short, it was a total disaster.

The Democratic plan would have split the center-city area (the section of the city where HRP is the strongest) equally into all five wards so that the HRP constituency would have no real power in any ward.

If HRP had not won two seats last April, the Democrats would have gotten away with their plan and we all would have faced ten more years of a city with 35,000 students, 10,000 black people, and 10,000 street freaks being governed by rich old men living in $60,000 houses.

Instead, HRP helped to vote down the democratic gerrymander and reconstitute the ward boundary commission to reflect the new makeup of city council - five Republicans, four Democrats, and two Humans.

With no party having a majority, this commission soon became a red hot battleground with the future political makeup of the City Council at stake.

The cast of characters was interesting enough in itself.

The Repbulicans were led by Jim Stephenson who is almost certain to be their candidate for mayor and the Democrats were led by Ted Beats who has himself expressed interest in Mayor Harris's job.

But HRP's representative's David Cahill and myself held the best bargaining positions--for unless the Democrats and Republicans could get together then one of the two money parties would have to meet HRP's terms in order to produce a majority plan.

So because of HRP's presence, the whole gerrymandering process was, for the first time, moved from the backroom caucus to the public negotiating table.

The intentions of the Democrats and Republicans soon became clear. The Democratic strategy was to divide the HRP strength into five separate wards in which this constituency would have little or no power. Prior to the April HRP victories this has always been the case.

Councilman Bob Fabric, for example, represents the predominantly student second ward while living miles away in swank luxury that contrasts the high-rent low-quality slums his "constituency" must live in.

HRP's ward boundary representatives were determined to change this.

As a result, the ward boundary commission reached a stalemate which lasted for months and months.

Finally, only a few weeks ago, the mission negotiations took a promising turn.

Strangely, it was the Republicans that broke the deadlock. They brought a clever new plan to the commission that succeeded in concentrating the strength of the student/freak/black community into two wards while creating Republican majorities in the other three.

The Democrats had continuously supported their original plan to cut up the center-city into five equal parts. When it became clear that they would not move from that position, HRP's ward boundary commissioners voted with the Republicans to reccommend the new plan to council.

We didn't like the new plan (named by someone the "Pregnant Witch" Plan) because it gave the Republicans a Council majority. But with the Democrats refusing to compromise, an HRP-Republican compromise was the only alternative.

But what seemed like the end of a long process was really only the beginning. For no sooner did HRP's representatives vote for the Republican plan then the Democrats freaked out.

Within 24 hours they agreed to meet with HRP representatives to work out a compromise. Thus Democrat Ted Beals (whose motives were probably far better than the rest of his party) David Cahill and I worked out a compromise which we called the "Red Plan" because it was drawn in red ink.

This plan would have maintained HRP's strength in two of the wards while improving the chances for the Democrats to beat the Republicans in another.

But although Beals agreed, other members of the Democratic Party said no, and a few days later the Democrats brought in a new compromise "Brown Plan." This plan clearly moved too far in the Democrats favor, so HRP members made a counterproposal called the "Black Plan."

The Black Plan finally passed the boundary commission and was recommended to council. HRP breathed a sigh of relief.

But not for long.

For unlike the Human Rights Party, the power in the Democratic party rests with the four men who sit on City Council, not the open meetings of the party.

When the Black Plan carne to a vote Councilman Fabric from the second ward, Councilman Mee Too from the Third, and Mayor Harris all voted down the com-

What do you think of public skool?

Earthworks: I think the Ann Arbor skools are really messed up, they're a bunch of shit. People who go to them don't really learn a whole lot and they don't become creative, they just become messed up.

Northside: I like it cause at my school we worked out a thing for having a three aged class, with third, fourth, and fifth grades all together. I like it a whole lot.

Joan Snitts: I think that kids should be made more aware of ideas that would stimulate their own opinions. In public skool theyre just taught what it is and how it is and without much room for them to really think about themselves, their own thing, what they wanna determine. I don't think there's enough room for that.

pioneer: It still isn't really too bad, it's just not really what I would like to go to. Classes are too long and I go for 7 hours a day.

Forsythe: Not very much. I'd rather stay home. I don't like it cause you gotta do work. I'd like school if the shit they taught you was something I could relate to.

This weeks Voice of the People was done by Alice Robertson and Linda Ross on State St.