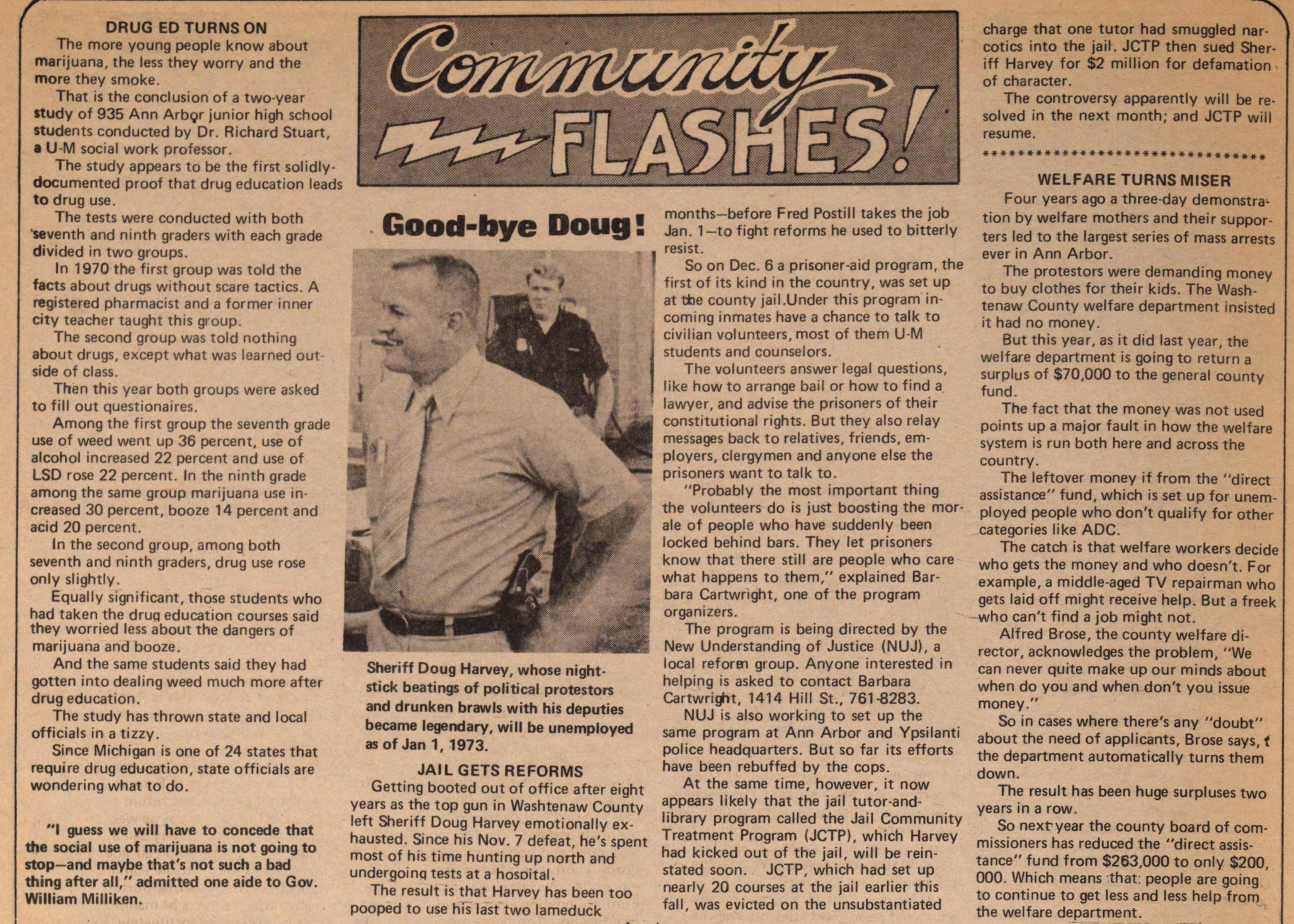 The more young people know about marijuana, the less they worry and the more they smoke.

That is the conclusion of a two-year study of 935 Ann Arbor junior high school students conducted by Dr. Richard Stuart, a U-M social work professor.

The study appears to be the first solidly-documented proof that drug education leads to drug use. The tests were conducted with both 'seventh and ninth graders with each grade divided in two groups.

In 1970 the first group was told the facts about drugs without scare tactics. A registered pharmacist and a former inner city teacher taught this group. The second group was told nothing about drugs, except what was learned outside of class.

Then this year both groups were asked to fill out questionaires.

Among the first group the seventh grade use of weed went up 36 percent, use of alcohol increased 22 percent and use of LSD rose 22 percent. In the ninth grade among the same group marijuana use increased 30 percent, booze 14 percent and acid 20 percent.

In the second group, among both seventh and ninth graders, drug use rose only slightly. Equally significant, those students who had taken the drug education courses said they worried less about the dangers of marijuana and booze.

And the same students said they had gotten into dealing weed much more after drug education.

The study has thrown state and local officials in a tizzy.

Since Michigan is one of 24 states that require drug education, state officials are wondering what to do.

"I guess we will have to concede that the social use of marijuana is not going to stop–and maybe that's not such a bad thing after all," admitted one aide to Gov. William Milliken.

Getting booted out of office after eight years as the top gun in Washtenaw County left Sheriff Doug Harvey emotionally exhausted. Since his Nov. 7 defeat, he's spent most of his time hunting up north and undergoing tests at a hospital.

The result is that Harvey has been too pooped to use his last two lameduck months–before Fred Postill takes the job Jan. 1–to fight reforms he used to bitterly resist.

So on Dec. 6 a prisoner-aid program, the first of its kind in the country, was set up at the county jail.Under this program incoming inmates have a chance to talk to civilian volunteers, most of them U-M students and counselors.

The volunteers answer legal questions, like how to arrange bail or how to find a lawyer, and advise the prisoners of their constitutional rights. But they also relay messages back to relatives, friends, employers, clergymen and anyone else the prisoners want to talk to.

"Probably the most important thing the volunteers do is just boosting the morale of people who have suddenly been locked behind bars. They let prisoners know that there still are people who care what happens to them," explained Barbara Cartwright, one of the program organizers.

The program is being directed by the New Understanding of Justice (NUJ), a local reform group. Anyone interested in helping is asked to contact Barbara Cartwright, 1414 Hill St., 761-8283.

NUJ is also working to set up the same program at Ann Arbor and Ypsilanti police headquarters. But so far its efforts have been rebuffed by the cops. At the same time, however, it now appears likely that the jail tutor-and-library program called the Jail Community Treatment Program (JCTP), which Harvey had kicked out of the jail, will be reinstated soon. JCTP, which had set up nearly 20 courses at the jail earlier this fall, was evicted on the unsubstantiated charge that one tutor had smuggled narcotics into the jail. JCTP then sued Sheriff Harvey for $2 million for defamation of character.

The controversy apparently will be resolved n the next month; and JCTP will resume.