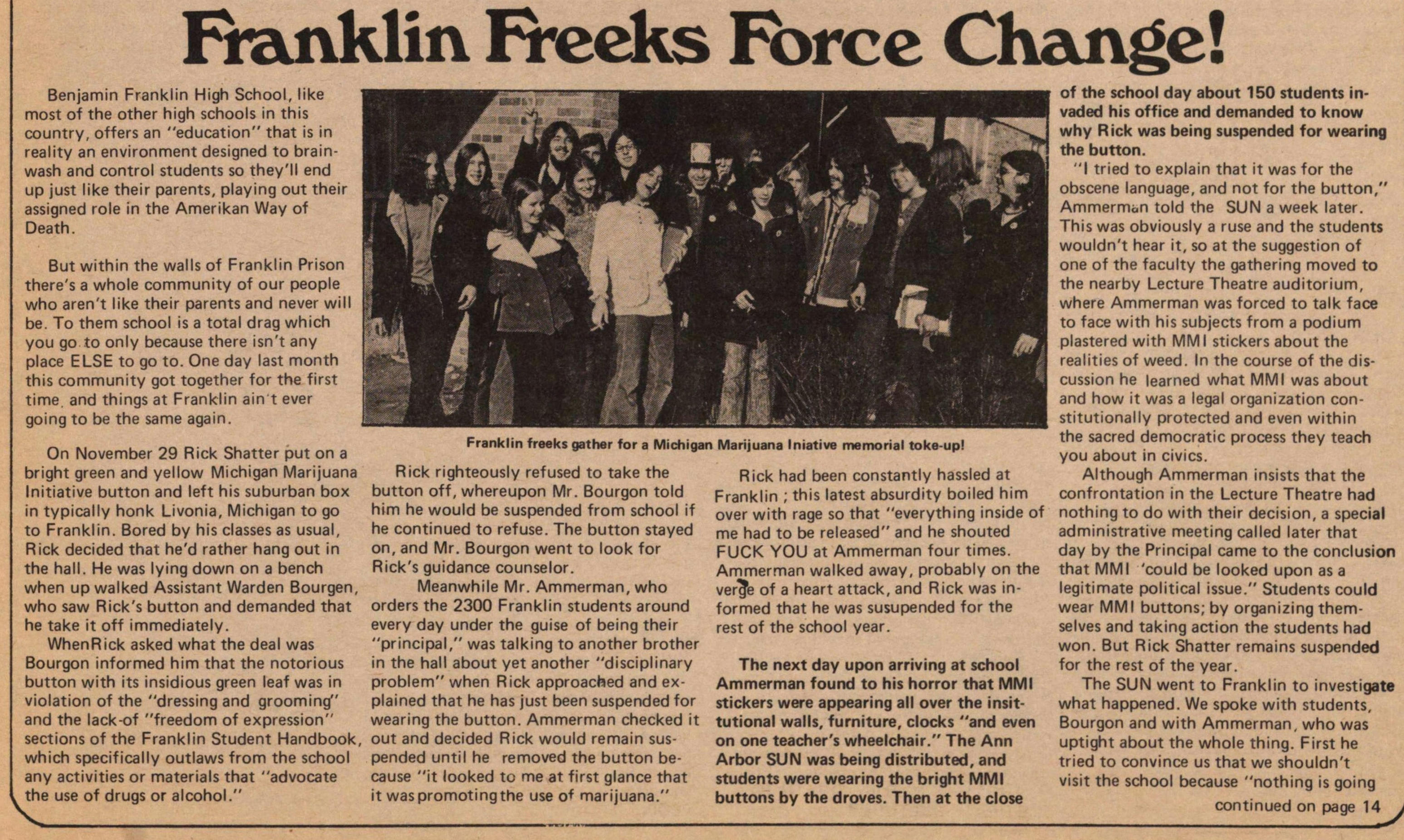 Benjamin Franklin High School, like most of the other high schools in this country, offers an "education" that is in reality an environment designed to brainwash and control students so they'll end up just like their parents, playing out their assigned role in the Amerikan Way of Death.

But within the walls of Franklin Prison there's a whole community of our people who aren't like their parents and never will be. To them school is a total drag which you go to only because there isn't any place ELSE to go to. One day last month this community got together for the first time and things at Franklin ain't ever going to be the same again.

On November 29 Rick Shatter put on a bright green and yellow Michigan Marijuana Initiative button and left his suburban box in typically honk Livonia, Michigan to go to Franklin. Bored by his classes as usual, Rick decided that he'd rather hang out in the hall. He was lying down on a bench when up walked Assistant Warden Bourgen, who saw Rick's button and demanded that he take it off immediately.

When Rick asked what the deal was Bourgon informed him that the notorious button with its insidious green leaf was in violation of the "dressing and grooming" and the lack-of "freedom of expression" sections of the Franklin Student Handbook, which specifically outlaws from the school any activities or materials that "advocate the use of drugs or alcohol."

Rick righteously refused to take the button off, whereupon Mr. Bourgon told him he would be suspended from school if he continued to refuse. The button stayed on, and Mr. Bourgon went to look for Rick's guidance counselor.

Meanwhile Mr. Ammerman, who orders the 2300 Franklin students around every day under the guise of being their "principal," was talking to another brother in the hall about yet another "disciplinary problem" when Rick approached and explained that he has just been suspended for wearing the button. Ammerman checked it, out and decided Rick would remain suspended until he removed the button because "it looked to me at first glance that it was promoting the use of marijuana."

Rick had been constantly hassled at Franklin; this latest absurdity boiled him over with rage so that "everything inside of me had to be released" and he shouted FUCK YOU at Ammerman four times. Ammerman walked away, probably on the verge of a heart attack, and Rick was informed that he was susupended for the rest of the school year.

The next day upon arriving at school Ammerman found to his horror that MMI stickers were appearing all over the insitutional walls, furniture, docks "and even on one teacher's wheelchair." The Ann Arbor SUN was being distributed, and students were wearing the bright MMI buttons by the droves. Then at the close ' of the school day about 150 students invaded his office and demanded to know why Rick was being suspended for wearing the button.

"I tried to explain that it was for the obscene language, and not for the button," Ammerman told the SUN a week later. This was obviously a ruse and the students wouldn't hear it, so at the suggestion of one of the faculty the gathering moved to the nearby Lecture Theatre auditorium, where Ammerman was forced to talk face to face with his subjects from a podium plastered with MMI stickers about the realities of weed. In the course of the discussion he learned what MMI was about and how it was a legal organization constitutionally protected and even within the sacred democratic process they teach you about in civics.

Although Ammerman insists that the confrontation in the Lecture Theatre had nothing to do with their decision, a special administrative meeting called later that day by the Principal carne to the conclusion that MMI 'could be looked upon as a legitimate political issue." Students could wear MMI buttons; by organizing themselves and taking action the students had won. But Rick Shatter remains suspended for the rest of the year.

The SUN went to Franklin to investigate what happened. We spoke with students, Bourgon and with Ammerman, who was uptight about the whole thing. First he tried to convince us that we shouldn't visit the school because "nothing is going

on here" and then when he found we intended to come anyway he ordered us not to talk to any of the students. Ammerman tried to keep reality from us anyway he could, including forbidding us to tape, record or photograph pur interviews. When telling us about Rick screaming "Fuck You!" Ammerman told us "don't make t look like I said those words to you."

And then right there in front of us he banned the SUN from the school, citing the Student Handbook rules against "obscenities." Ammerman had gone through issue No. 44 of the paper page by page and circled the shocking statements in red. They included: an article about the People's Ballroom which said "we have to work this shit out," John Lennon asking 'what else could the bastards do" in an article about Ten for Two; a couple of other shits and a line about how "LSD opened up people's minds" which Ammerman said "encouraged the use of iIlegal substances."

As greying Ammerman looked at the floor he also told us that he liked much of what was in the SUN because "it looks like you're trying to help each other." But what I believe personally makes no difference. l'm responsible to the people I work for" whom he said were the Livonia Board of Education and the parents.

"You mean you don't work for the students," we asked.

"That's correct," was his reply.

Students all across Amerika are getting hip to the contradiction; the schools aren't run for them, they're run for the rulers of this country by puppet administrators like Ammerman whose interest is the wishes of the people at the top. But students are getting high and starting to move to free themselves from the educational factory. At Franklin they're tokin up in the smoking lounges and plotting the downfall of more stupid rules and colonial dictators. POWER TO YOUNG PEOPLE! THE YOUTH WILL MAKE THE REVOLUTION !