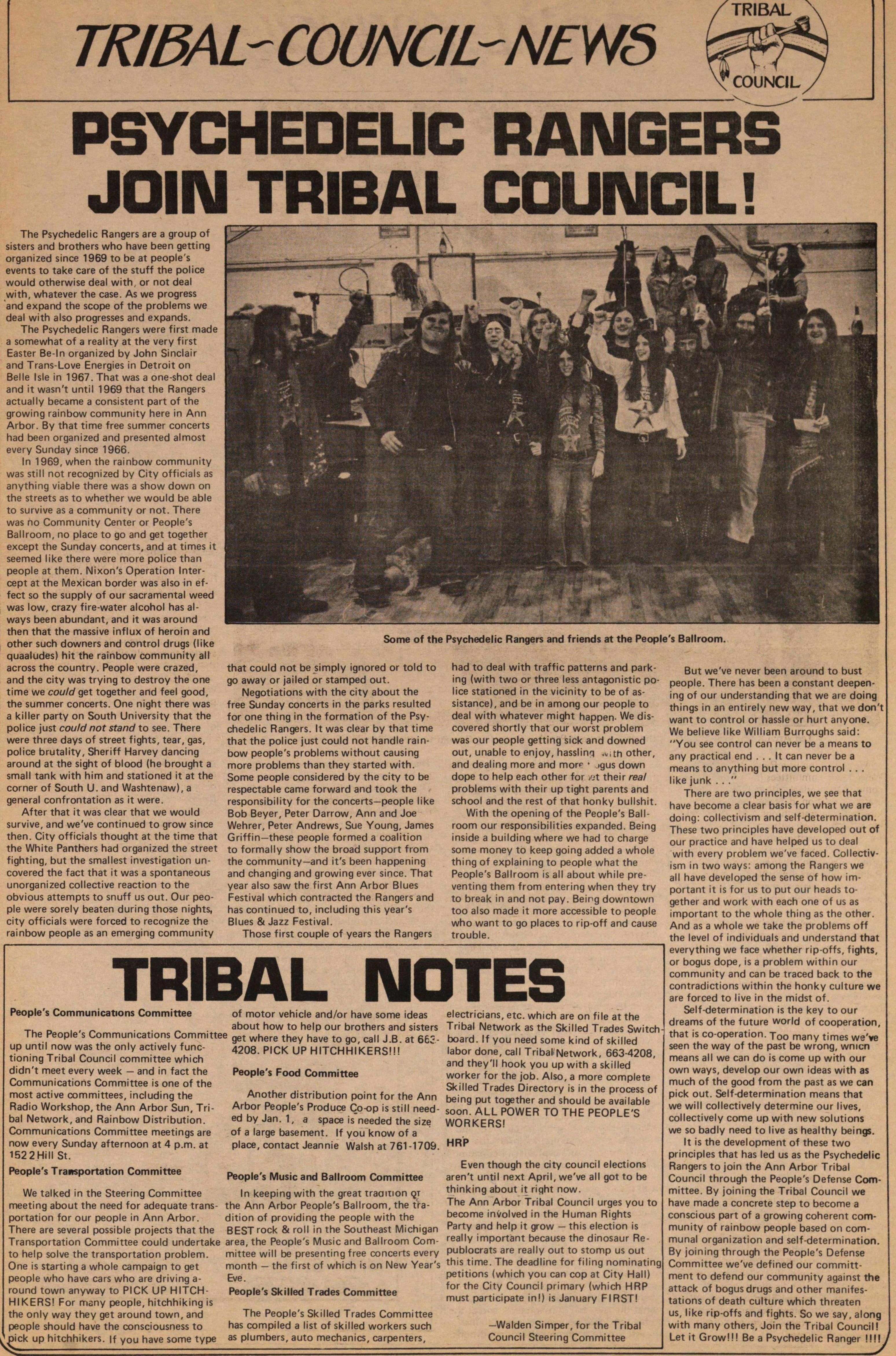 The Psychedelic Rangers are a group of sisters and brothers who have been getting organized since 1969 to be at people's events to take care of the stuff the police would otherwise deal with or not deal with, whatever the case. As we progress and expand the scope of the problems we deal with also progresses and expands.

The Psychedelic Rangers were first made a somewhat of a reality at the very first Easter Be-In organized by John Sinclair and Trans-Love Energies in Detroit on Belle Isle in 1967. That was a one-shot deal and it wasn't until 1969 that the Rangers actually became a consistent part of the growing rainbow community here in Ann Arbor. By that time free summer concerts had been organized and presented almost every Sunday since 1966.

In 1969, when the rainbow community was still not recognized by City officials as anything viable there was a show down on the streets as to whether we would be able to survive as a community or not. There was no Community Center or People's Ballroom, no place to go and get together except the Sunday concerts, and at times it seemed like there were more police than people at them. Nixon's Operation Intercept at the Mexican border was also in effect so the supply of our sacramental weed was low, crazy fire-water alcohol has always been abundant, and it was around then that the massive influx of heroin and other such downers and control drugs (like quaaludes) hit the rainbow community all across the country. People were crazed, and the city was trying to destroy the one time we could get together and feel good, the summer concerts. One night there was a killer party on South University that the police just could not stand to see. There were three days of street fights, tear, gas, police brutality, Sheriff Harvey dancing around at the sight of blood (he brought a small tank with him and stationed it at the corner of South U. and Washtenaw), a general confrontation as it were.

After that it was clear that we would survive, and we've continued to grow since then. City officials thought at the time that the White Panthers had organized the street fighting, but the smallest investigation uncovered the fact that it was a spontaneous unorganized collective reaction to the obvious attempts to snuff us out. Our people were sorely beaten during those nights, city officials were forced to recognize the rainbow people as an emerging community that could not be simply ignored or told to go away or jailed or stamped out.

Negotiations with the city about the free Sunday concerts in the parks resulted for one thing in the formation of the Psychedelic Rangers. It was clear by that time that the police just could not handle rainbow people's problems without causing more problems than they started with. Some people considered by the city to be respectable came forward and took the responsibility for the concerts–people like Bob Beyer, Peter Darrow, Ann and Joe Wehrer, Peter Andrews, Sue Young, James Griffin–these people formed a coalition to formally show the broad support from the community–and it's been happening and changing and growing ever since. That year also saw the first Ann Arbor Blues Festival which contracted the Rangers and has continued to, including this year's Blues & Jazz Festival.

Those first couple of years the Rangers had to deal with traffic patterns and parking (with two or three less antagonistic police stationed in the vicinity to be of assistance), and be in among our people to deal with whatever might happen. We discovered shortly that our worst problem was our people getting sick and downed out, unable to enjoy, hassling with other, and dealing more and more and more bogus down dope to help each other forget their real problems with their up tight parents and school and the rest of that honky bullshit.

With the opening of the People's Ballroom our responsibilities expanded. Being inside a building where we had to charge some money to keep going added a whole thing of explaining to people what the People's Ballroom is all about while preventing them from entering when they try to break in and not pay. Being downtown too also made it more accessible to people who want to go places to rip-off and cause trouble.

But we've never been around to bust people. There has been a constant deepening of our understanding that we are doing things in an entirely new way, that we don't want to control or hassle or hurt anyone. We believe like William Burroughs said: "You see control can never be a means to any practical end . . . It can never be a means to anything but more control . . . like junk . . ."

There are two principles, we see that have become a clear basis for what we are doing: collectivism and self-determination. These two principles have developed out of our practice and have helped us to deal with every problem we've faced. Collectivism in two ways: among the Rangers we all have developed the sense of how important it is for us to put our heads together and work with each one of us as important to the whole thing as the other. And as a whole we take the problems off the level of individuals and understand that everything we face whether rip-offs, fights, or bogus dope, is a problem within our community and can be traced back to the contradictions within the honky culture we are forced to live in the midst of.

Self-determination is the key to our dreams of the future world of cooperation, that is cooperation. too many times we'w seen the way of the past be wrong, which means all we can do is come up with our own ways, develop our own ideas with as much of the good from the past as we can pick out. Self-determination means that we will collectively determine our lives, collectively come up with new solutions we so badly need to live as healthy beings.

It is the development of these two principles that has led us as the Psychedelic Rangers to join the Ann Arbor Tribal Council through the People's Defense Committee. By joining the Tribal Council we have made a concrete step to become a conscious part of a growing coherent community of rainbow people based on communal organization and self-determination. By joining through the People's Defense Committee we've defined our committment to defend our community against the attack of bogus drugs and other manifestations of death culture which threaten us, like rip-offs and fights. So we say, along with many others, Join the Tribal Council! Let it Grow!! Be a Psychedelic Ranger !!!!