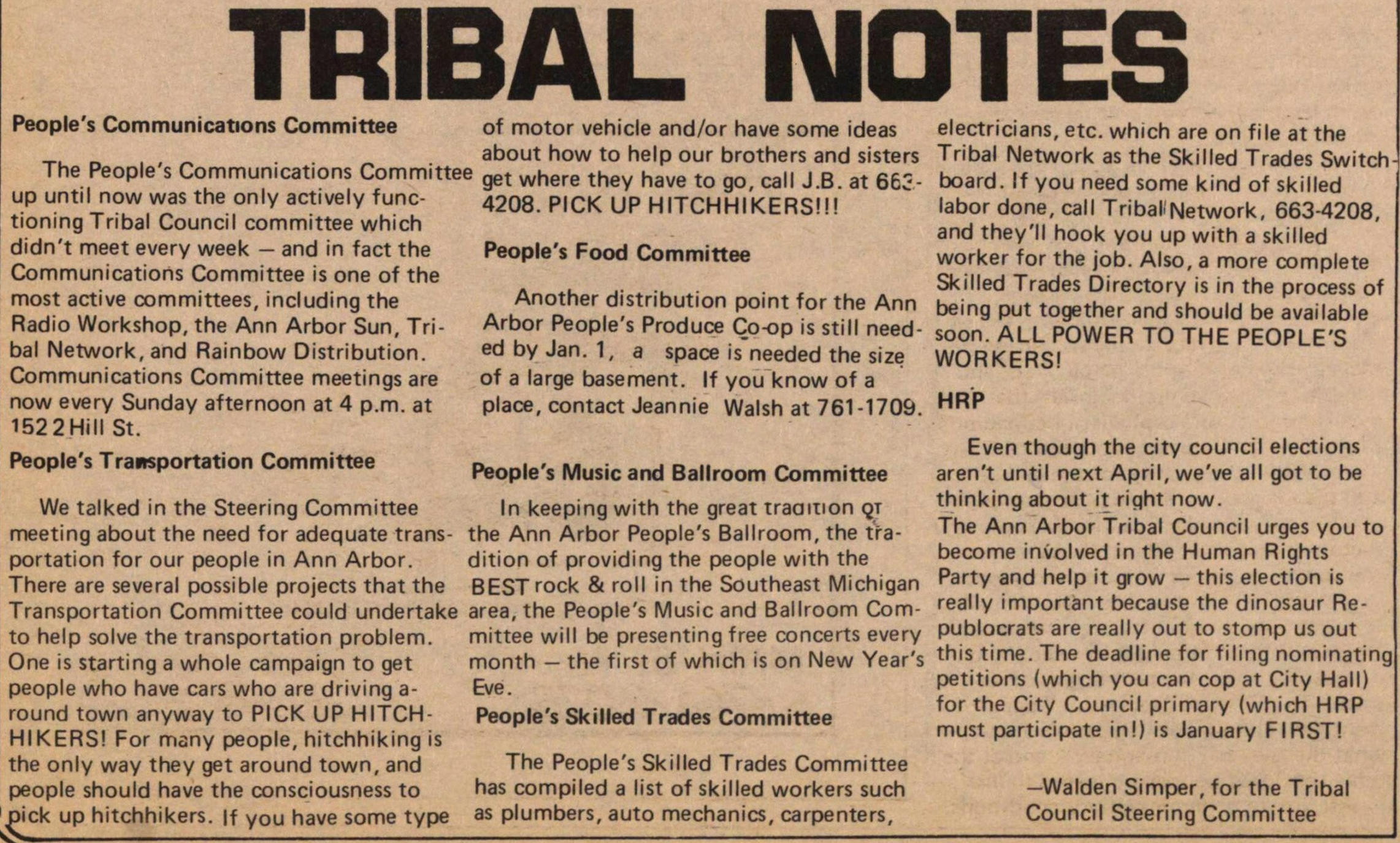 We talked in the Steering Committee meeting about the need for adequate transportation for our people in Ann Arbor. There are several possible projects that the Transportation Committee could undertake to help solve the transportaron problem. One is starting a whole campaign to get people who have cars who are driving around town anyway to PICK UP HITCHHIKERS! For many people, hitchhiking is the only way they get around town, and people should have the consciousness to pick up hitchhikers. If you have some type of motor vehicle and/or have some ideas about how to help our brothers and sisters get where they have to go, call J.B. at 663-4208. PICK UP HITCHHIKERS!

Another distribution point for the Ann Arbor People's Produce Co-op is still needed by Jan. 1, a space is needed the size of a large basement. If you know of a place, contact Jeannie Walsh at 761-1709.

In keeping with the great tradition of the Ann Arbor People's Ballroom, the tradition of providing the people with the BEST rock & roll in the Southeast Michigan area, the People's Music and Ballroom Committee will be presenting free concerts every month - the first of which is on New Year's Eve.

The People's Skilled Trades Committee has compiled a list of skilled workers such as plumbers, auto mechanics, carpenters, electricians, etc. which are on file at the Tribal Network as the Skilled Trades Switchboard. If you need some kind of skilled labor done, call Tribal Network, 663-4208, and they'll hook you up with a skilled worker for the job. Also, a more complete Skilled Trades Directory is in the process of being put together and should be available soon. ALL POWER TO THE PEOPLE'S WORKERS!

Even though the city council elections aren't until next April, we've all got to be thinking about it right now. The Ann Arbor Tribal Council urges you to become involved in the Human Rights Party and help it grow - this election is really important because the dinosaur Republocrats are really out to stomp us out this time. The deadline for filing nominating petitions (which you can cop at City Hall) for the City Council primary (which HRP must particípate in!) is January FIRST!