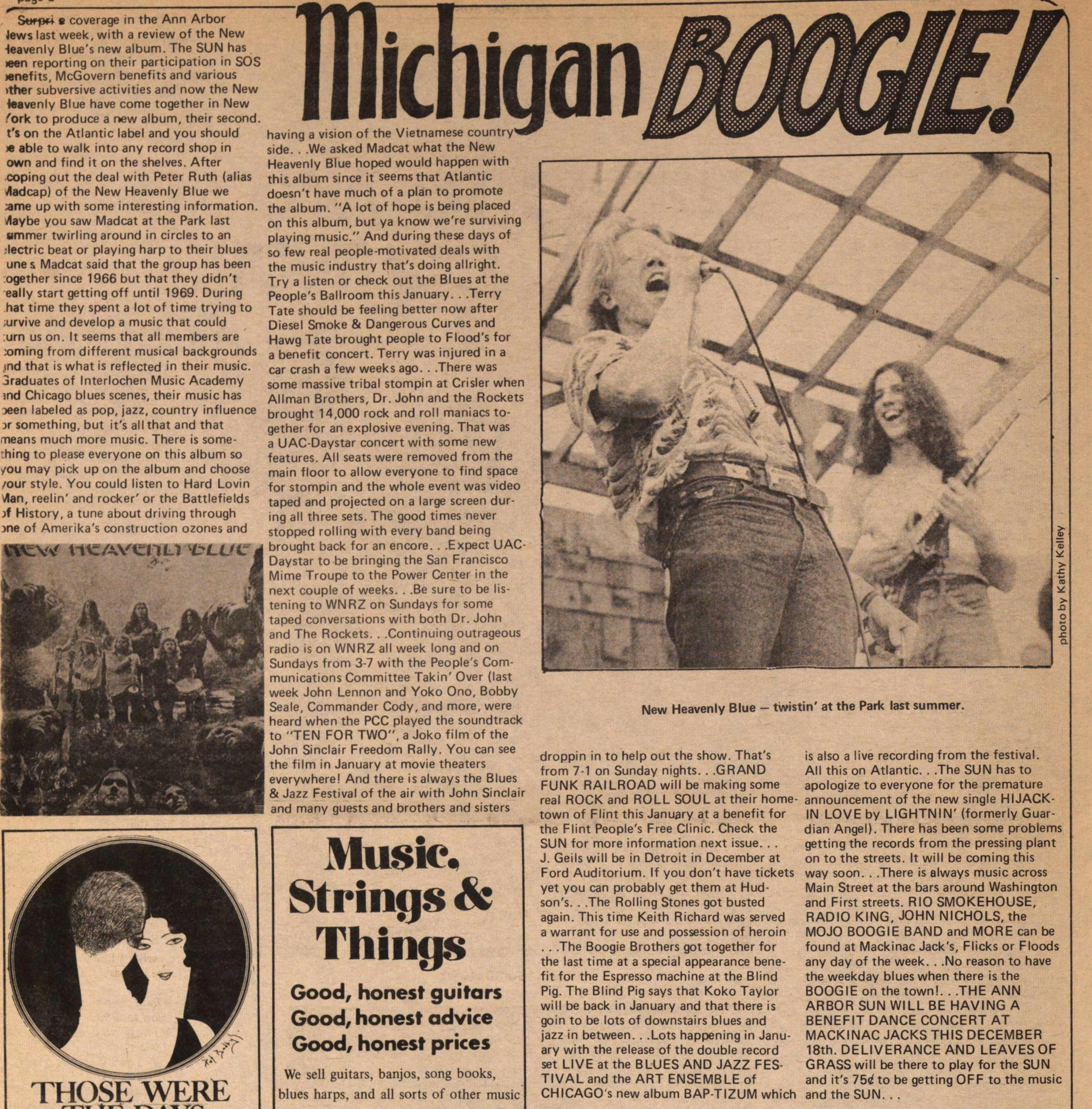 Surprise coverage in the Ann Arbor News last week, with a review of the New Heavenly Blue's new album. The SUN has been reporting on their participation in SOS benefits, McGovern benefits and various other subversive activities and now the New Heavenly Blue have come together in New York to produce a new album, their second. It's on the Atlantic label and you should be able to walk into any record shop in town and find it on the shelves. After scoping out the deal with Peter Ruth (alias Madcap) of the New Heavenly Blue we came up with some interesting information. Maybe you saw Madcat at the Park last summer twirling around in circles to an electric beat or playing harp to their blues tunes. Madcat said that the group has been together since 1966 but that they didn't really start getting off until 1969. During that time they spent a lot of time trying to survive and develop a music that could turn us on. It seems that all members are coming from different musical backgrounds and that is what is reflected in their music. Graduates of Interlochen Music Academy and Chicago blues scenes, their music has been labeled as pop, jazz, country influence or something, but it's all that and that means much more music. There is somehing to please everyone on this album so you may pick up on the album and choose your style. You could listen to Hard Lovin Man, reelin' and rocker' or the Battlefields of History, a tune about driving through one of Amerika's construction ozones and having a vision of the Vietnamese country side. . .We asked Madcat what the New Heavenly Blue hoped would happen with this album since it seems that Atlantic doesn't have much of a plan to promote the album. "A lot of hope is being placed on this album, but ya know we're surviving playing music." And during these days of so few real people-motivated deals with the music industry that's doing allright. Try a listen or check out the Blues at the People's Ballroom this January. . .Terry Tate should be feeling better now after Diesel Smoke & Dangerous Curves and Hawg Tate brought people to Flood's for a benefit concert. Terry was injured in a car crash a few weeks      ago. . .There was some massive tribal stompin at Crisler when Allman Brothers, Dr. John and the Rockets brought 14,000 rock and roll maniacs together for an explosive evening. That was a UAC-Daystar concert with some new features. All seats were removed from the main floor to allow everyone to find space for stompin and the whole event was video taped and projected on a large screen during all three sets. The good times never stopped rolling with every band being brought back for an encore. . .Expect UAC-Daystar to be bringing the San Francisco Mime Troupe to the Power Center in the next couple of weeks. . .Be sure to be listening to WNRZ on Sundays for some taped conversations with both Dr. John and The Rockets. . .Continuing outrageous radio is on WNRZ all week long and on Sundays from 3-7 with the People's Communications Committee Takin' Over (last week John Lennon and Yoko Ono, Bobby Seale, Commander Cody, and more, were heard when the PCC played the soundtrack to "TEN FOR TWO", a Joko film of the John Sinclair Freedom Rally. You can see the film in January at movie theaters everywhere! And there is always the Blues & Jazz Festival of the air with John Sinclair and many guests and brothers and sisters droppin in to help out the show. That's from 7-1 on Sunday      nights. . .GRAND FUNK RAILROAD will be making some real ROCK and ROLL SOUL at their hometown of Flint this January at a benefit for the Flint People's Free Clinic. Check the SUN for more information next issue. . . J. Geils will be in Detroit in December at Ford Auditorium. If you don't have tickets yet you can probably get them at Hudson's. . . The Rolling Stones got busted again. This time Keith Richard was served a warrant for use and possession of heroin . . . The Boogie Brothers got together for the last time at a special appearance benefit for the Espresso machine at the Blind Pig. The Blind Pig says that Koko Taylor will be back in January and that there is goin to be lots of downstairs blues and jazz in between. . .Lots happening in January with the release of the double record set LIVE at the BLUES AND JAZZ FESTIVAL and the ART ENSEMBLE of CHICAGO's new album BAP-TIZUM which is also a live recording from the festival. All this on Atlantic. . . The SUN has to apologize to everyone for the premature announcement of the new single HIJACKIN LOVE by LIGHTNIN' (formerly Guardian Angel). There has been some problems getting the records from the pressing plant on to the streets. It will be coming this way soon. . . There is always music across Main Street at the bars around Washington and First streets. RIO SMOKEHOUSE, RADIO KING, JOHN NICHOLS, the MOJO BOOGIE BAND and MORE can be found at Mackinac Jack's, Flicks or Floods any day of the week. . .No reason to have the weekday blues when there is the BOOGIE on the town!. . . THE ANN ARBOR SUN WILL BE HAVING A BENEFIT DANCE CONCERT AT MACKINAC JACKS THIS DECEMBER 18th. DELIVERANCE AND LEAVES OF GRASS will be there to play for the SUN and it's $0.75 to be getting OFF to the music and the SUN. . .