f "Yes my life was destined for misery I... 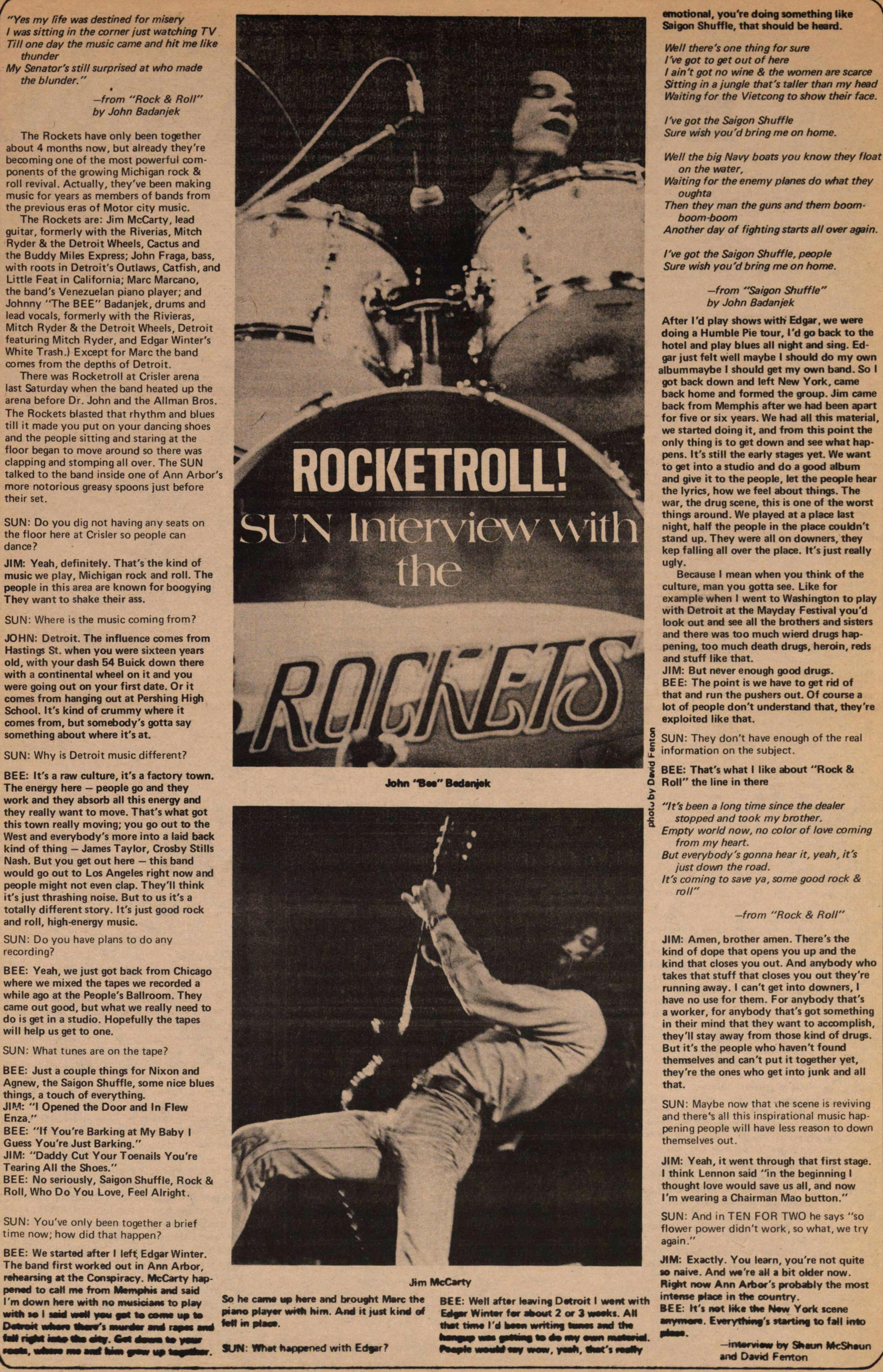 "Yes my life was destined for misery I was sitting in the corner just watching TV Till one day the music came and hit me like thunder My Senator's still surprised at who made the blunder." -from "Rock & Roll" by John Badanjek

The Rockets have only been together about 4 months now, but already they're becoming one of the most powerful components of the growing Michigan rock & roll revival. Actually, they've been making music for years as members of bands from the previous eras of Motor city music. The Rockets are: Jim McCarty, lead guitar, formerly with the Riverias, Mitch Ryder & the Detroit Wheels, Cactus and the Buddy Miles Express; John Fraga, bass, with roots in Detroit's Outlaws, Catfish, and Little Feat in California; Marc Marcano, the band's Venezuelan piano player; and Johnny "The BEE" Badanjek, drums and lead vocals, formerly with the Rivieras, Mitch Ryder & the Detroit Wheels, Detroit featuring Mitch Ryder, and Edgar Winter's White Trash. Except for Marc the band comes from the depths of Detroit. There was Rocketroll at Crisler arena last Saturday when the band heated up the arena before Dr. John and the Allman Bros. The Rockets blasted that rhythm and blues till it made you put on your dancing shoes and the people sitting and staring at the floor began to move around so there was clapping and stomping all over. The SUN talked to the band inside one of Ann Arbor's more notorious greasy spoons just before their set.

SUN: Do you dig not having any seats on the floor here at Crisler so people can dance?

JIM: Yeah, definitely. That's the kind of music we play, Michigan rock and roll. The people in this area are known for boogying They want to shake their ass.

SUN: Where is the music coming from?

JOHN: Detroit. The influence comes from Hastings St. when you were sixteen years old, with your dash 54 Buick down there with a continental wheel on it and you were going out on your first date. Or it comes from hanging out at Pershing High School. It's kind of crummy where it comes from, but somebody's gotta say something about where it's at.

SUN: Why is Detroit music different?

BEE: It's a raw culture, it's a factory town. The energy here - people go and they work and they absorb all this energy and they really want to move. That's what got this town really moving; you go out to the West and everybody's more into a laid back kind of thing - James Taylor, Crosby    Stills Nash. But you get out here - this band would go out to Los Angeles right now and people might not even clap. They'll think it's just thrashing noise. But to us it's a totally different story. It's just good rock and roll, high-energy music.

SUN: Do you have plans to do any recording?

BEE: Yeah, we just got back from Chicago where we mixed the tapes we recorded a while ago at the People's Ballroom. They came out good, but what we really need to do is get in a studio. Hopefully the tapes will help us get to one.

SUN: What tunes are on the tape?

BEE: Just a couple things for Nixon and Agnew, the Saigon Shuffle, some nice blues things, a touch of everything. JIM: "I Opened the Door and In Flew Enza." BEE: "If You're Barking at My Baby I Guess You're Just Barking." JIM: "Daddy Cut Your Toenails You're Tearing All the Shoes." BEE: No seriously, Saigon Shuffle, Rock & Roll, Who Do You Love, Feel Alright.

SUN: You've only been together a brief time now; how did that happen?

BEE: We started after I left Edgar Winter. The band first worked out in Ann Arbor, rehearsing at the Conspiracy. McCarty happened to call me from Memphis and said I'm down here with no musicians to play with so I said well you got to come up to Detroit where there's murder and rapes and fall right into the city. Get down to your roots, where me and him grew up together. So he came up here and brought Marc the piano player with him. And it just kind of fell in place.

SUN: What happened with Edgar?

BEE: Well after leaving Detroit I went with Edgar Winter for about 2 or 3 weeks. All that time I'd been writing tunes and the hangup was getting to do my own material. People would say wow, yeah, that's really emotional, you're doing something like Saigon Shuffle, that should be heard.

Well there's one thing for sure l've got to get out of here I ain't got no wine & the women are scarce Sitting in a jungle that's taller than my head Waiting for the Vietcong to show their face. l've got the Saigon Shuffle Sure wish you'd bring me on home. Well the big Navy boats you know they float on the water, Waiting for the enemy planes do what they oughta Then they man the guns and them boom-boom-boom Another day of fighting starts all over again. l've got the Saigon Shuffle, people Sure wish you'd bring me on home. -from "Saigon Shuffle" by John Badanjek

After l'd play shows with Edgar, we were doing a Humble Pie tour, l'd go back to the hotel and play blues all night and sing. Edgar just felt well maybe I should do my own album maybe I should get my own band. So I got back down and left New York, carne back home and formed the group. Jim came back from Memphis after we had been apart for five or six years. We had all this material, we started doing it, and f rom this point the only thing is to get down and see what happens. It's still the early stages yet. We want to get into a studio and do a good album and give it to the people, let the people hear the lyrics, how we feel about things. The war, the drug scene, this is one of the worst things around. We played at a place last night, half the people in the place couldn't stand up. They were all on downers, they kept falling all over the place. It's just really ugly. Because I mean when you think of the culture, man you gotta see. Like for example when I went to Washington to play with Detroit at the Mayday Festival you'd look out and see all the brothers and sisters and there was too much weird drugs happening, too much death drugs, heroin, reds and stuff like that.

JIM: But never enough good drugs. BEE: The point is we have to get rid of that and run the pushers out. Of course a lot of people don't understand that, they're exploited like that.

SUN: They don't have enough of the real information on the subject.

BEE: That's what I like about "Rock & Roll" the line in there

"It's been a long time since the dealer stopped and took my brother. Empty world now, no color of love coming from my heart. But everybody's gonna hear it, yeah, it's just down the road. It's coming to save ya, some good rock & roll"     -from "Rock & Roll"

JIM: Amen, brother amen. There's the kind of dope that opens you up and the kind that closes you out. And anybody who takes that stuff that closes you out they're running away. I can't get into downers, I have no use for them. For anybody that's a worker, for anybody that's got something in their mind that they want to accomplish, they'll stay away from those kind of drugs. But it's the people who haven't found themselves and can't put it together yet, they're the ones who get into junk and all that.

SUN: Maybe now that the scene is reviving and there's all this inspirational music happening people will have less reason to down themselves out.

JIM: Yeah, it went through that first stage. I think Lennon said "in the beginning I thought love would save us all, and now l'm wearing a Chairman Mao button."

SUN: And in TEN FOR TWO he says "so flower power didn't work, so what, we try again."

JIM: Exactly. You learn, you're not quite so naive. And we're all a bit older now. Right now Ann Arbor's probably the most intense place in the country.

BEE: lt's not like the New York scene anymore. Everything's starting to fall into place.