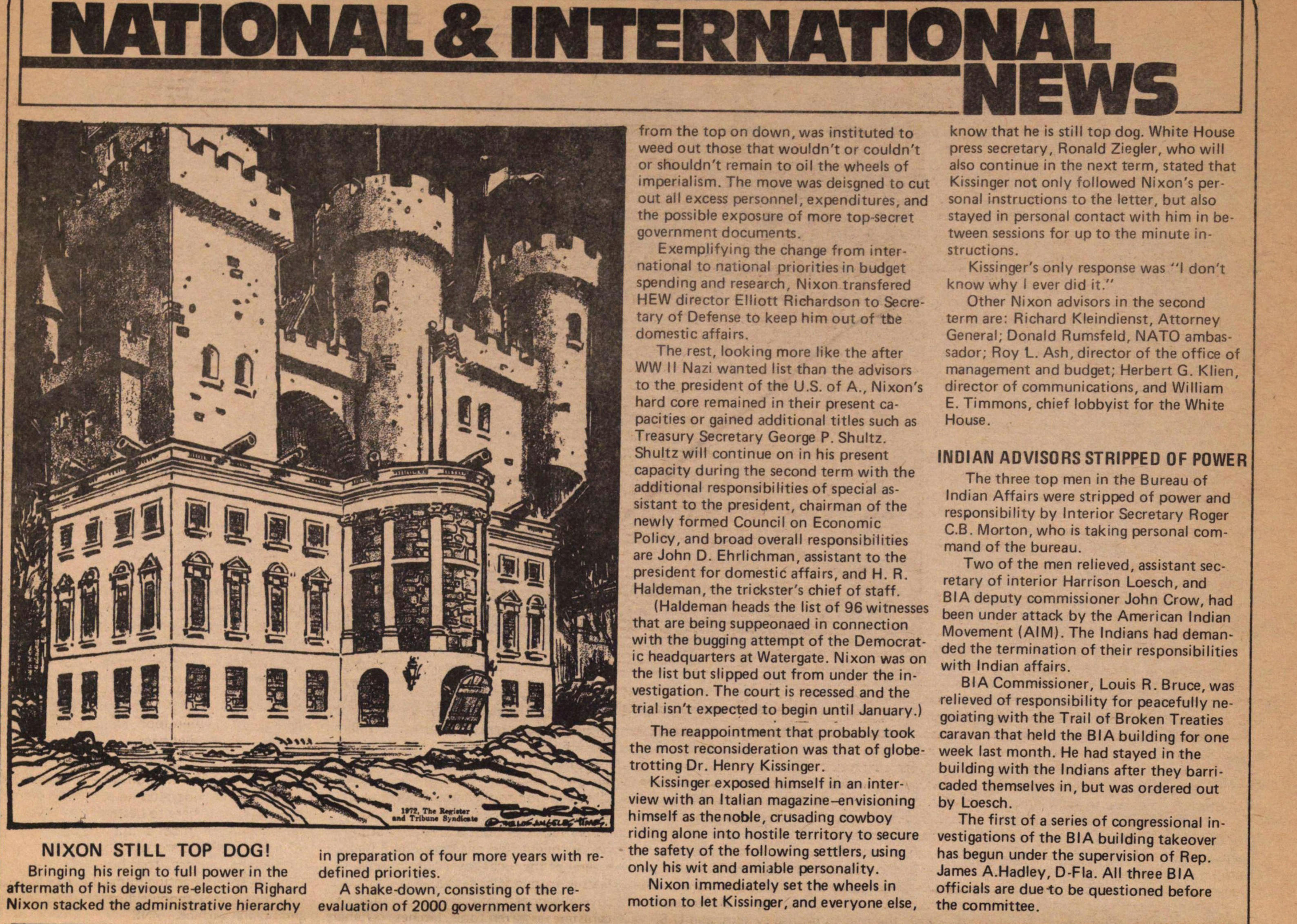 Bringing his reign to full power in the aftermath of his devious re-election Richard Nixon stacked the administrative hierarchy in preparation of four more years with redefined priorities.

A shake-down, consisting of the reevaluation of 2000 government workers from the top on down, was instituted to weed out those that wouldn’t or couldn’t or shouldn’t remain to oil the wheels of imperialism. The move was designed to cull out all excess personnel, expenditures, and the possible exposure of more top-secret government documents.

Exemplifying the change from international to national priorities in budget spending and research, Nixon transferred HEW director Elliott Richardson to Secretary of Defense to keep him out of the domestic affairs.

The rest, looking more like the after WW II Nazi wanted list than the advisors to the president of the U.S. of A., Nixon’s hard core remained in their present capacities or gained additional titles such as Treasury Secretary George P. Shultz. Shultz will continue on in his present capacity during the second term with the additional responsibilities of special assistant to the president, chairman of the newly formed Council on Economic Policy, and broad overall responsibilities are John D. Ehrlichman, assistant to the president for domestic affairs, and H. R. Haldeman, the trickster’s chief of staff.

(Haldeman heads the list of 96 witnesses that are being subpoenaed in connection with the bugging attempt of the Democratic headquarters at Watergate. Nixon was on the list but slipped out from under the investigation. The court is recessed and the trial isn’t expected to begin until January.)

The reappointment that probably took the most reconsideration was that of globetrotting Dr. Henry Kissinger.

Kissinger exposed himself in an interview with an Italian magazine-envisioning himself as the noble, crusading cowboy riding alone into hostile territory to secure the safety of the following settlers, using only his wit and amiable personality.

Nixon immediately set the wheels in motion to let Kissinger, and everyone else, know that he is still top dog. White House press secretary, Ronald Ziegler, who will also continue in the next term, stated that Kissinger not only followed Nixon’s personal instructions to the letter, but also stayed in personal contact with him in between sessions for up to the minute instructions.

Kissinger’s only response was “I don’t know why I ever did it.”

The three top men in the Bureau of Indian Affairs were stripped of power and responsibility by Interior Secretary Roger C.B. Morton, who is taking personal command of the bureau.

Two of the men relieved, assistant secretary of interior Harrison Loesch, and BIA deputy commissioner John Crow, had been under attack by the American Indian Movement (AIM). The Indians had demanded the termination of their responsibilities with Indian affairs.

BIA Commissioner, Louis R. Bruce, was relieved of responsibility for peacefully negotiating with the Trail of Broken Treaties caravan that held the BIA building for one week last month. He had stayed in the building with the Indians after they barricaded themselves in, but was ordered out by Loesch.

The first of a series of congressional investigations of the BIA building takeover has begun under the supervision of Rep. James A. Hadley, D-Fla. All three BIA officials are due to be questioned before the committee.