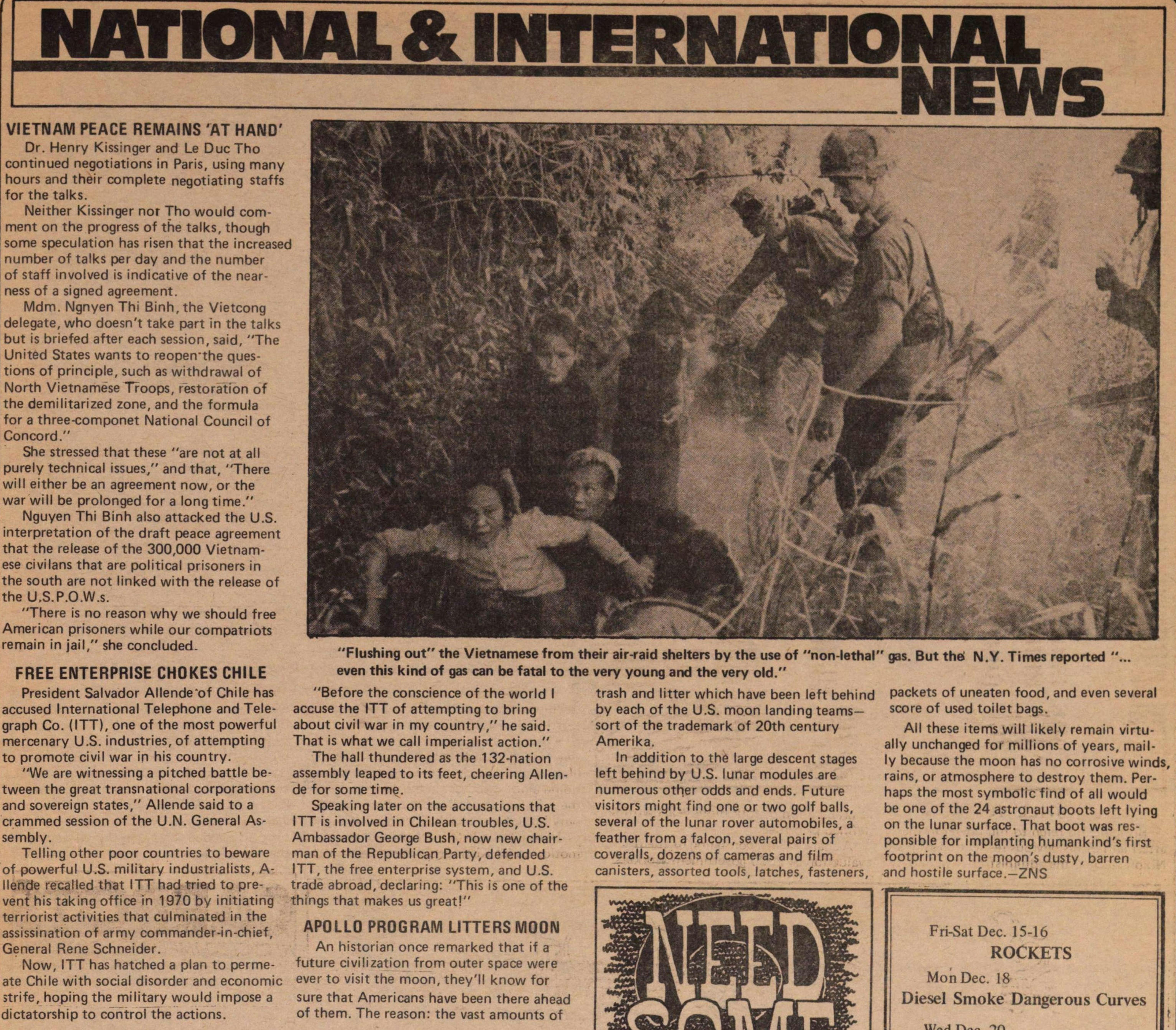 Dr. Henry Kissinger and Le Duc Tho continued negotiations in Paris, using many hours and their complete negotiating staffs for the talks.

Neither Kissinger nor Tho would comment on the progress of the talks, though some speculation has risen that the increased number of talks per day and the number of staff involved is indicative of the nearness of a signed agreement.

Mdm. Nguyen Thi Binh, the Vietcong delegate, who doesn’t take part in the talks but is briefed after each session, said, “The United States wants to reopen ‘the questions of principle, such as withdrawal of North Vietnamese Troops, restoration of the demilitarized zone, and the formula for a three-component National Council of Concord.”

She stressed that these “are not at all purely technical issues,” and that, “There will either be an agreement now, or the war will be prolonged for a long time.”

“There is no reason why we should free American prisoners while our compatriots remain in jail,” she concluded.

President Salvador Allende of Chile has accused International Telephone and Telegraph Co. (ITT), one of the most powerful mercenary U.S. industries, of attempting to promote civil war in his country.

“We are witnessing a pitched battle between the great transnational corporations and sovereign states,” Allende said to a crammed session of the U.N. General Assembly.

Telling other poor countries to beware of powerful U.S. military industrialists, Allende recalled that ITT had tried to prevent his taking office in 1970 by initiating terrorist activities that culminated in the assassination of army commander-in-chief, General Rene Schneider.

Now, ITT has hatched a plan to permeate Chile with social disorder and economic strife, hoping the military would impose a dictatorship to control the actions.

“Before the conscience of the world I accuse the ITT of attempting to bring about civil war in my country,” he said. “That is what we call imperialist action.”

The hall thundered as the 132-nation assembly leaped to its feet, cheering Allende for some time.

Speaking later on the accusations that ITT is involved in Chilean troubles, U.S. Ambassador George Bush, now new chairman of the Republican Party, defended ITT, the free enterprise system, and U.S. trade abroad, declaring: “This is one of the things that makes us great!”

An historian once remarked that if a future civilization from outer space were ever to visit the moon, they’ll know for sure that Americans have been there ahead of them. The reason: the vast amounts of trash and litter which have been left behind by each of the U.S. moon landing teams – sort of the trademark of 20th century Amerika.

In addition to the large descent stages left behind by U.S. lunar modules are numerous other odds and ends. Future visitors might find one or two golf balls, several of the lunar rover automobiles, a feather from a falcon, several pairs of coveralls, dozens of cameras and film canisters, assorted tools, latches, fasteners, packets of uneaten food, and even several score of used toilet bags.

All these items will likely remain virtually unchanged for millions of years, mainly because the moon has no corrosive winds, rains, or atmosphere to destroy them. Perhaps the most symbolic find of all would be one of the 24 astronaut boots left lying on the lunar surface. That boot was responsible for implanting humankind’s first footprint on the moon’s dusty barren and hostile surface. – ZNS