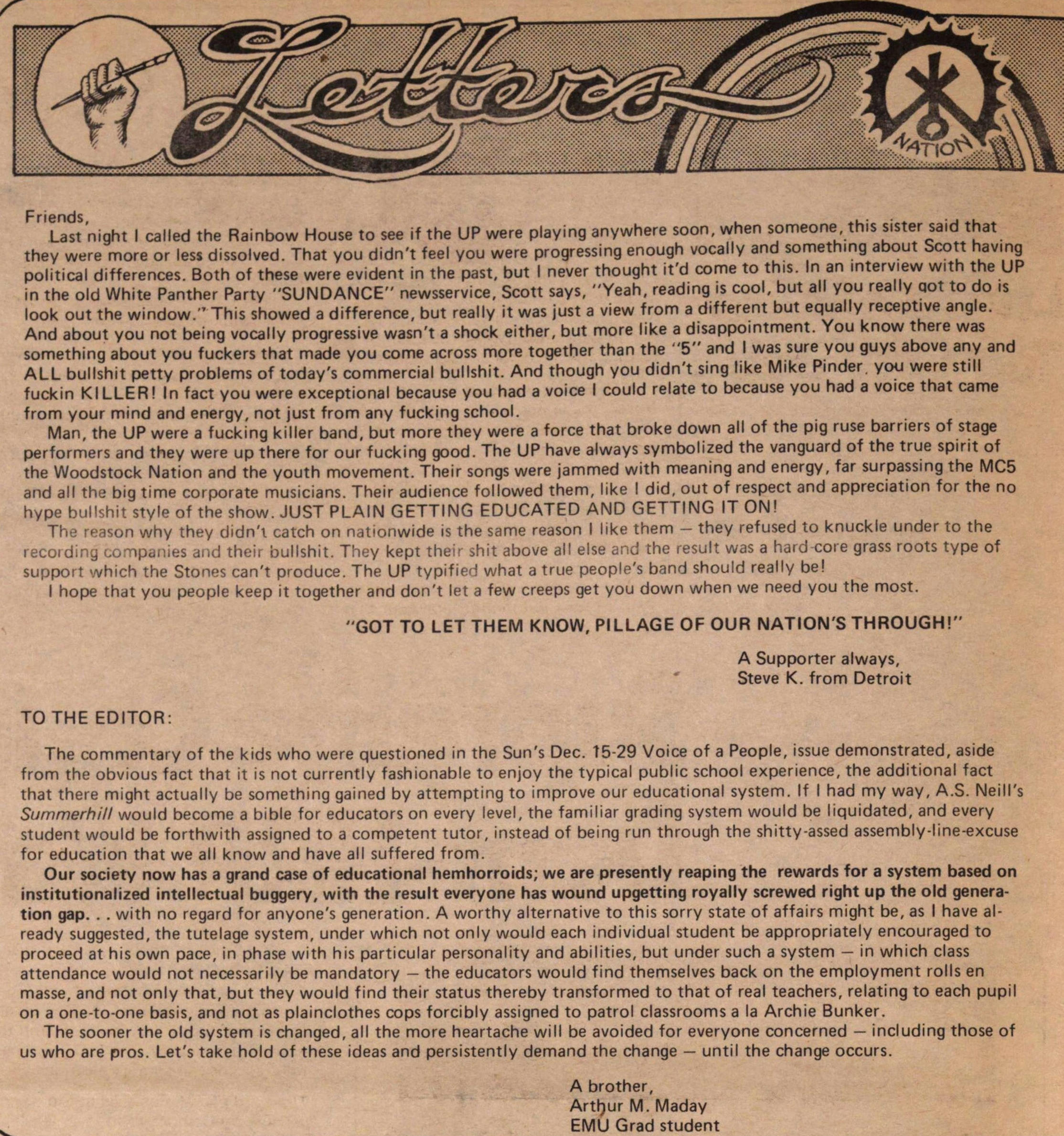 Last night I called the Rainbow House to see f the UP were playing anywhere soon. when someone this sister said that they were more or less dissolved. That you didn't feel you were progressing enough vocally and somethmg about Scott having politica! differences. Both of these were evident in the past. but I never thought it'd come to this. In an interview with the UP in the old White Panther Party "SUNDANCE" newsservice. Scott says, "Yeah. reading is cool, but all you really qot to do is look out the window.' This showed a difference, but really t was just a view from a different but equally receptive angle. And about you not being vocally progressive wasn't a shock either, but more like a disappointment. You know there was something about you fuckers that made you come across more together than the "5" and I was sure you guys above any and ALL bullshit petty problems of today's commercial bullshit. And though you didn't sing like Mike Pinder. you were stilt fuckin KILLER! In fact you were exceptional because you had a voice I could relate to because you had a voice that carne from your mind and energy, not just from any fucking school. Man, the UP were a fucking killer band, but more they were a forcé that broke down all of the pig ruse barners of stage performers and they were up there for our fucking good. The UP have always symbolized the vanguard of the true spirit of the Woodstock Nation and the youth movement. Their songs were jammed with meaning and energy, far surpassing the MC5 and all the big time corporate musicians. Their audience followed them, like I did, out of respect and appreciation for the no hype bullshit style of the show. JUST PLAIN GETTING EDUCATED AND GETTING IT ON! The reason why they didn'i catch on nationwide is the same reason I like them - they refused to knuckle under to the recoiding companies and their bullshit. They kept their shit above all else and the result was a hard core grass roots type of support which the Stones can't produce. The UP typified what a true people's band should really be! I hope that you people keep it together and don't let a few creeps get you down when we need you the most. "GOT TO LET THEM KNOW, PILLAGE OF OUR NATION'S THROUGH!" A Supporter always, Steve K. from Detroit TOTHE EDITOR: The commentary of the kids who were questioned in the Sun's Dec. T5-29 Voice of a People, issue demonstrated, aside from the obvious fact that it is not currently fashionable to enjoy the typical public school experience, the additional fact that there might actually be something gained by attempting to improve our educational system. If I had my way, A.S. Neill's Summerhill would become a bible for educators on every level, the familiar grading system would be liquidated, and every student would be forthwith assigned to a competent tutor, instead of being run through the shitty-assed assemblyline-excuse for education that we all know and have all suffered from. Our society now has a grand case of educational hemhorroids; we are presently reaping the rewards for a system based on institutionalized ntellectual buggery, with the result everyone has wound upgetting royally screwed right up the old generation gap. . . with no regard for anyone's generation. A worthy alternative to this sorry state of affairs might be, as I have already suggested, the tutelage system, under which not only would each individual student be appropriately encouraged to proceed at his own pace, in phase with his particular personality and abilities, but under such a system - in which class attendance would not necessarily be mandatory - the educators would find themselves back on the employment rolls en masse, and not only that, but they would find their status thereby transformed to that of real teachers, relating to each pupil on a one-to-one basis, and not as plainclothes cops forcibly assigned to patrol classrooms a la Archie Bunker. The sooner the old system is changed, all the more heartache will be avoided for everyone concerned - including those of us who are pros. Let's take hold of these ideas and persistently demand the change - until the change occurs. A brother,