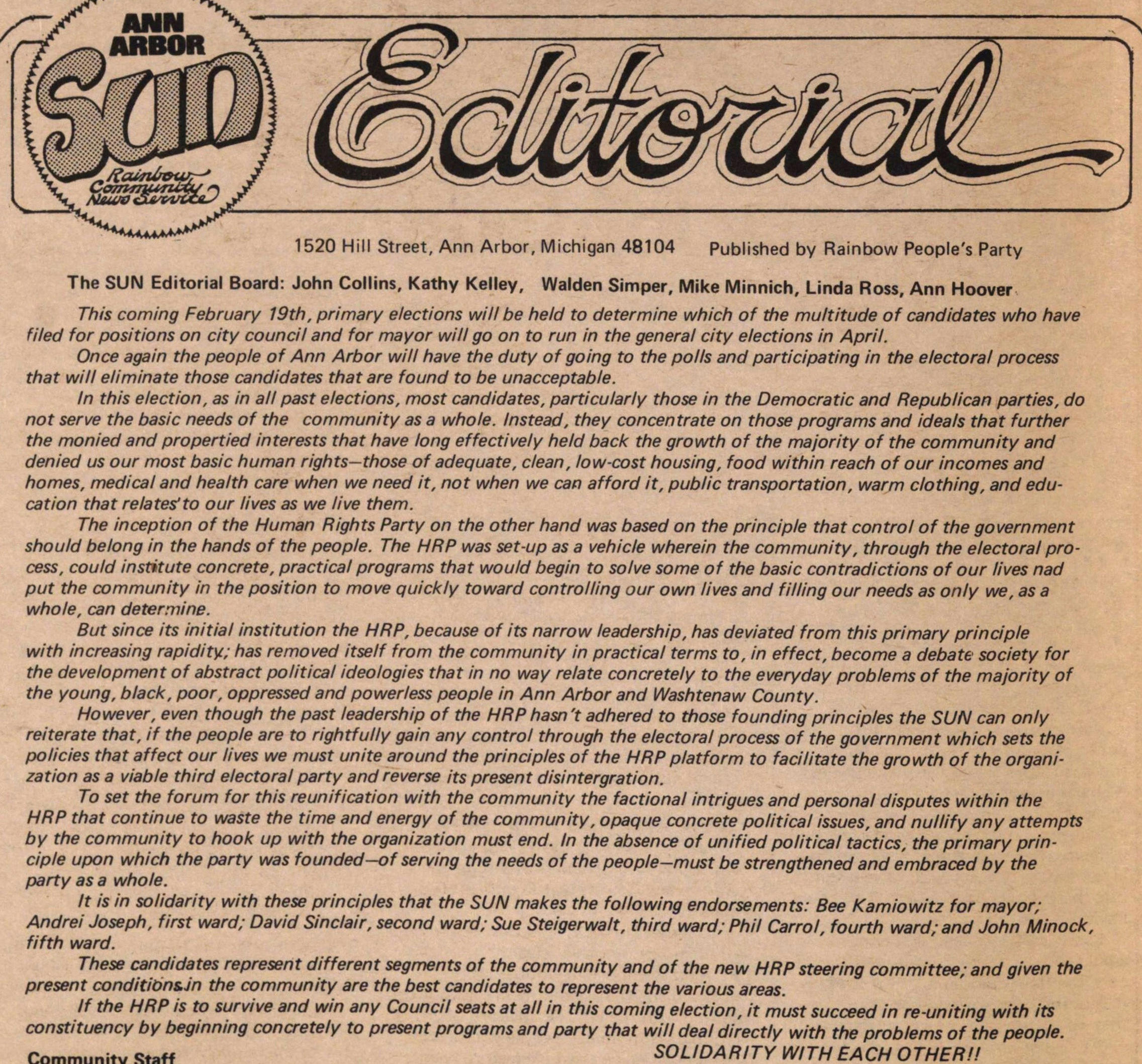 This coming February 19th, primary elections will be held to determine which of the multitude of candidates who have fied for positions on city council and for mayor will go on to run in the general city elections in April. Once again the people of Ann Arbor will have the duty of going to the polls and participating in the electoral process that will elimínate those candidates that are found to be unacceptable. In this election, as in all past elections, most candidates, particularly those in the Democratie and Republican parties, do not serve the basic needs of the community as a whole. Instead, they concéntrate on those programs and deals that further the monied and propertied interests that have long effectively held back the growth of the majority of the community and denied us our most basic human rights- those of adequate, clean, low-cost housing, food within reach of our incomes and homes, medical and health care when we need it, not when we can afford it, public transportaron , warm clothing, and education that relates1 to our Uves as we live them. The inception of the Human Rights Party on the other hand was based on the principie that control of the government should belong in the hands of the people. The HRP was set-up as a vehicle wherein the community, through the electoral process, could institute concrete, practical programs that would begin to solve some of the basic contradictions of our Uves nad put the community in the position to move quickly toward controlling our own Uves and f iling our needs as only we, as a whole, can determine. But since its initial institution the HRP, because of its narrow leadership, has deviated f rom this primary principie with increasing rapidity; has removed itself from the community in practical terms to, in effect, become a debate society for the development of abstract politica ideologies that in no way relate concretely to the everyday problems of the majority of the young, black, poor, oppressed and powerless people in Ann Arbor and Washtenaw County. However, even though the past leadership of the HRP hasn 't adhered to those founding principies the SUN can only reitérate that, i f the people are to rightfully gain any control through the electoral process of the government which sets the policies that affect our Uves we must unite around the principies of the HRP platform to facilítate the growth of the organization as a viable third electoral party and reverse its present disintergration. To set the forum for this reunification with the community the factional intrigues and personal disputes within the HRP that continue to waste the time and energy of the community, opaque concrete politica issues, and nullify any attempts by the community to hook up with the organization must end. In the absence of unified politica! facties, the primary principie upon which the party was founded-of serving the needs of the people-must be strengthened and embraced by the party as a whole. It is in solidarity with these principies that the SUN makes the following endorsements: Bee Kamiowitz for mayor; Andrei Joseph, first ward; David Sinclair, second ward; Sue Steigerwalt, third ward; Phil Carrol, fourth ward;and John Minock, fifth ward. These candidates represent different segments of the community and of the new HRP steering committee; and given the present conditión&jn the community are the best candidates to represent the various areas. If the HRP is to survive and win any Council seats at all in this coming election, it must succeed in re-uniting with its constituency by beginning concretely to present programs and party that will deal directly with the oroblems of the people. SOLIDARITY WITH EACH OTHERÜ