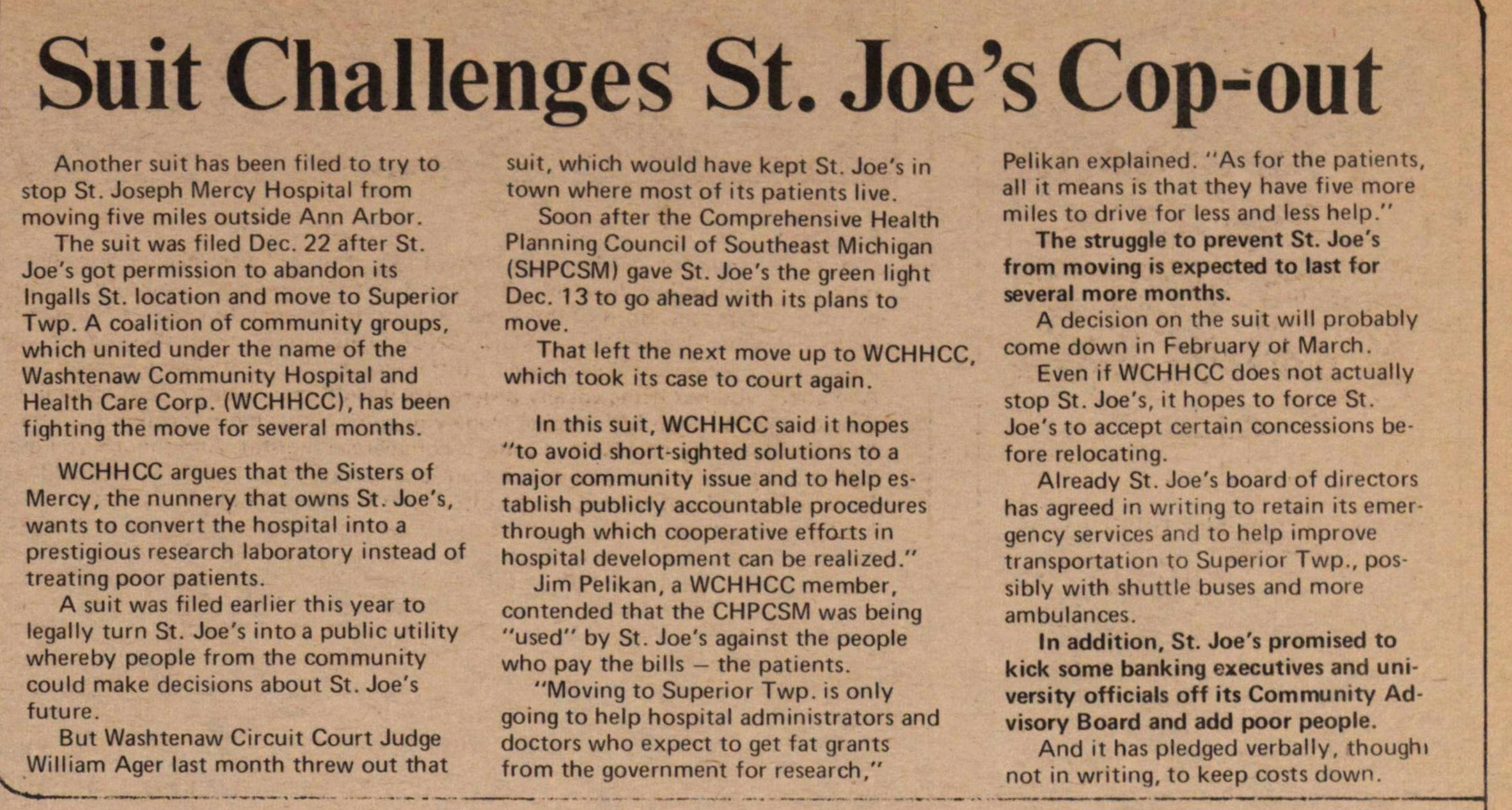 Another suit has been filed to try to stop St. Joseph Mercy Hospital from moving five miles outside Ann Arbor.

The suit was filed Dec. 22 after St. Joe's got permission to abandon its Ingalls St. location and move to Superior Twp. A coalition of community groups. which united under the name of the Washtenaw Community Hospital and Health Care Corp. (WCHHCC), has been fighting the move for several months.

WCHHCC argues that the Sisters of Mercy, the nunnery that owns St. Joe's, wants to convert the hospital into a prestigious research laboratory instead of treating poor patients.

A suit was filed earlier this year to legally turn St. Joe's into a public utility whereby people from the community could make decisions about St. Joe's future.

But Washtenaw Circuit Court Judge William Ager last month threw out that suit, which would have kept St. Joe's in town where most of its patients live.

Soon after the Comprehensive Health Planning Council of Southeast Michigan (SHPCSM) gave St. Joe's the green light Dec. 13 to go ahead with its plans to move.

That left the next move up to WCHHCC, which took its case to court again.

In this suit. WCHHCC said it hopes "to avoid short-sighted solutions to a major community issue and to help establish publicly accountable procedures through which cooperative efforts in hospital development can be realized."

Jim Pelikan, a WCHHCC member, contended that the CHPCSM was being "used" by St. Joe's against the people who pay the bills -- the patients.

"Moving to Superior Twp. is only going to help hospital administrators and doctors who expect to get fat grants from the government for research," Pelikan explained. "As for the patients, all it means is that they have five more miles to drive for less and less help."

The struggle to prevent St. Joe's from moving is expected to last for several more months.

A decision on the suit will probably come down in February of March.

Even if WCHHCC does not actually stop St. Joe's, it hopes to force St. Joe's to accept certain concessions before relocating.

Already St. Joe's board of directors has agreed in writing to retain its emergency services and to help improve transportation to Superior Twp., possibly with shuttle buses and more ambulances.

In addition, St. Joe's promised to kick some banking executives and university officials off its Community Advisory Board and add poor people.

And it has pledged verbally, though not in writing, to keep costs down.